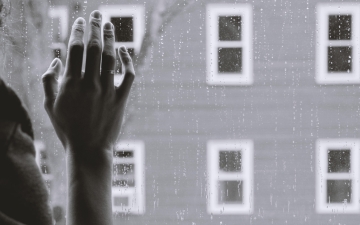 There’s a growing ache at the heart of many of our western societies. Its name is loneliness. And a stream of actors has been calling it out of late: psychologists, pastors, pandemistas, even politicians. Loneliness has emerged as the faithful companion to our grandparents’ rural migration from the land and the village, as we chose city, industry, specialization, and dwindling household sizes, while riding the cultural horses of dehumanizing technology and hyper-individualism. According to the pundits, COVID isolation has only lubricated the rails of our society’s plunge into this loneliness.

So my reflection here is not specifically about COVID and loneliness. We are all hearing, reading and pronouncing on the myriad effects the pandemic responses are having on our collective mental and social health. I’ll leave that critically important topic for another time.

I have in mind a longer view to the century of loneliness that we have created—particularly in western, Eurocentric societies. This is a century in which we have inadvertently built an amplified existence for loneliness, using actual bricks, shifting values, golden calf diversions and myths about heroic individualism.

How did we get here?

Do yourself a favour: read Noreena Hertz’s new book, The Lonely Century: How to Restore Human Connection in a World That’s Pulling Apart. I’m amidst of Hertz’s articulate, readable canvas of loneliness, where she paints with exquisite attention to studies and experts (yes, 94 pages of footnotes). To be sure, the book does engage our perceptions and experiences of loneliness, but more importantly, Hertz is focused on its structures, and the fragmentation within our urban communities.

The stories and indicators Hertz cites of loneliness in everyday life rank from the mundane to the oppressive. There’s the hi-tech corporate surveillance that penalizes chats with colleagues and trips to the loo. There are mixed income housing buildings where the lower class enters through a “poor door” separate from wealthy neighbours. There is a “RentAFriend” service that provides platonic companionship for live-alones and others. More bizarre are the stories of paying someone to cuddle you, of seeking companionship with a robot, and of abandoned elderly women committing crimes to access community in Japanese prisons.

Loneliness is making us ill. The pandemic has drawn back the curtain on century-old loneliness to reveal a profound and deepening mental malady. In addition to the mental health crisis, loneliness is driving up rates of heart disease, cancer, stroke and dementia, making us almost 30 percent more likely to die prematurely. Hertz tells us that loneliness triggers a stress response in our bodies, which lingers and accumulates, to the detriment of our immune systems. We’re now hearing that loneliness is as bad for our health as a pack-a-day smoking habit. And that’s before we get to economic costs, political aggression, and spiritual malaise.

The studies of loneliness report patterns of disconnection. According to Hertz, just months before the pandemic, three in five American adults considered themselves lonely. In 2018, one in eight Brits reported that they did not have a single close friend they could rely on. Gallup tells us that in 2017, 85 percent of employees across the planet felt disconnected from their company and from their work. Many felt lonely at work—60 percent in the UK; similarly, elsewhere.

The epic of loneliness is now being told, in part, courtesy of COVID. But we arrived here thanks to urban studies, and loneliness measurements. Over several decades one gold standard has emerged and been widely employed—the 20 questions of the UCLA Loneliness Index. The index probes our relationships with friends, family, colleagues and neighbours, and delivers the traditional definitions of loneliness that pivot around the absence of love, company, and intimacy.

But Hertz breaks with tradition and insists that a full-orbed definition goes beyond the Loneliness Index and extends into the world of economic and political exclusion. Today’s “particularly harsh form of capitalism,” or “neoliberalism,” teaches us to “see ourselves as competitors not collaborators, consumers not citizens, hoarders not sharers, takers not givers, hustlers not helpers” (p.14, 16). Loneliness includes being ignored, unseen or disconnected from our fellow citizens, our employer, our community, our government, “as both an internal state and an existential one—personal, societal, economic, and political.” (p.11)

The Lonely Century is impressive in its breadth, covering loneliness and human health impacts (vs. the health benefits of tight, intentional communities, like the ultra-orthodox Jewish Haredim), loneliness and the rise of right-wing populism, and the self-reliant “solitary city” amidst the “contactless age.” She is compelled to address the detrimental role of mobile phones, especially on children and youth, along with the rise in office loneliness. She wraps up with a discussion of robots that increasingly monitor us, replace workers, and displace human interaction, offering cuddles, sex, companionship, widening the gulf between us and our communities.

I want to affirm Hertz’s finger on the pulse of these multiple fragmentations at the heart of the loneliness issue. We might even push that a further step: the loneliness epidemic raises for me profound questions about the anthropology, spirituality, and urbanism of belonging and identity and place. These weave together within a 21st Century reckoning with the powers, players and structures of the lonely century. For example:

No vaccine yet for the loneliness pandemic

These structures that engender and promote loneliness were years in the making, and hence, their undoing will be years in the unmaking. Any moves toward the ideas and practices of local and intentional community must first build a seawall against the tsunami of fragmentation forces now unleashed.

Where faith communities and churches were once a natural force in local community gathering, a vacuum now often reigns. In too many cases the church has walked in cultural lockstep with these forces of loneliness. There is ample evidence of:

There are, of course, learning and experiments and initiatives that challenge the lonely century: renewed interest in theologies and practices of parish, rewilding churches, groups recultivating the practices of place. There are no easy prescriptions here for social and religious leaders, who, in many cases, are themselves increasingly aware of loneliness—their own and others’. And our cultural desire for happy endings is no match for this complex tapestry: this requires a longer view, building local relationships, and a commitment to cycles of reflection-action-learning. Ultimately, I see no way forward other than breaking bonds—dismantling our isolating behaviours and structures, and rebuilding bonds—intentionality in loving and reshaping our households, local human economies and neighbourhoods.

Anyway, if your interest is piqued, read the book. And talk about it—not on a screen, but with real people. In your neighbourhood and in your church. You might even agree to attempt one or two post-pandemic local community actions against this century-old leviathan named loneliness.

David Kupp is Professor of Urban and Community Development at Wycliffe College.