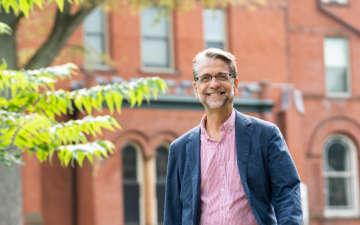 I’ll be retiring next summer.  People ask me “why now?”.  Lots of reasons, probably: let someone younger have a place at the faculty table; family responsibilities; health; fatigue; out of synch with the culture; “work is done,” “new things to do,” generational stage of life; and so on. These are not just “my reasons,” but the kinds of reasons one is likely to hear from many others in my position.

I will miss teaching in many respects. Teaching has been filled with blessing for me, as I point out below. And I continue to have strong convictions about what teaching and learning ought to involve (for all my missteps). I hope that these convictions will be taken up by others, whatever generational and cultural changes must inevitably dull the relevance of most of my other views on things. So for instance, I still resonate with a bit of “intellectual” advice that the great atheist philosopher Bertrand Russell gave to “future generations” at the end of this life. He said: “When you are studying any intellectual matter or considering any philosophy, ask yourself only what are the facts and what is the truth that the facts bear out. Never let yourself be diverted either by what you wish to believe or by what you think would have beneficent social effects if it were believed.” There are some big problems with Russell’s advice, but nonetheless it points to some important realities.

One of the things I have always tried to impress upon students is that they are called to “demonstrate” their claims. They must “back it up” with “evidence”: a text where the author really did say what you say she said; an analysis that can point out how the meaning you attribute to this or that action or writing is what you assert. Show me that you “really know” what you are saying, as opposed to just jumping to conclusions or slipping into comfortable modes of affirmation or critique. Most of us—I include myself here—just do the latter most of the time. For if we were not to do so, we would assert very little! Of course, this might just be the right thing to do: assert less, ponder more, pray unceasingly.

This goes to a derivative concern of mine, that is quite concrete: avoid jargon. Especially for academics and preachers. Jargon is in fact a consequence of undemonstrated commitment—asserting this and that simply out of partisanship, which means just saying what everybody else says who is a member of the party in question. “Parties” are not just political; they are scholarly, and religious (and often the more wicked for that). We often call the discourse of party jargon “ideology,” and our era of religion and scholarship is nothing if not riven by ideological outlooks. Universities, seminaries, and churches seem to be jargon-mills. It is pretty easy to tell what most people’s views are about religion, politics, and culture simply by listening to them talk for a few uninterrupted minutes, in sentences scaffolded by jargon. That is simply because so much of what any of us believe we believe out of ideological passion rather than evidence.

But what is evidence? What are the “facts” that Russell speaks of? Most of us realize that the latter (the “facts”) are always incomplete, often coloured in their recognition by our presuppositions; and that the former is only meaningful if there are identified problems and contexts of discussion in which it (evidence) can take form. Fossils, for instance, are only evidence for past and disappeared forms of life within a context in which the questions of both the past and forms of life have been raised and identified (and much else too). Evidence, that is, requires reasoning before it is even brought to bear on something; and more reasoning to test its usefulness, something that then opens up the questions surrounding “factuality” itself. What does it mean to say that a fossil is a “fact”? What aspect of it—it’s mineral make up? Its shape? Where it was found? No more than that?

Again, all this only goes to underline how the ideological discourses of our day, filled with their predictable jargon, are indications of waning reason. We are not living in an era wedded to reason. The Internet is a great source for unreasoned facts, uttered as jargon, and digested as partisan nutrients.  Truth lies a long way off from any of this.

The Christian Gospel, to be sure, is not equivalent to a theory about climate change, virus transmission, or changes to income inequality, the evidence for which is both complex, and based on facts, the meaning of which are always obscure. To paraphrase the end of St. John’s Gospel, you could gather all the facts of the world, order them evidentially, and you still could not “contain” the truth and thus explain the power of God in Christ. Rather, one “believes” that truth by faith, something God gives directly as a gift. “My speech and my preaching was not with enticing words of human wisdom, but in demonstration of the Spirit and of power” (1 Cor. 2:4). Part of the problem is that, given how infinitely large the Gospel is, as it were, it is positively filled with facts and evidence and reason. The Gospel does not exclude these things. But it surpasses them and renders them ever and utterly incomplete.

Where does that leave the Christian scholar, or Christian preacher? On an unending quest to engage the facts, the evidence, the reasoning of a human creature in a way that coheres with something greater than their unknown sum. That requires at least three things: unstinting diligence, unrelenting humility, and the self-aware admission of one’s reliance upon God’s grace, i.e. simple and unadorned confession.  All at once! One must be ever diligent to get after and under the facts of any claim one is faced with, whether about miracles or poverty, healing or injustice, birth and death—there is ever more to learn, much to overturn, something to illuminate; one must never cease to take all this up with a sense that one does not really know the truth behind this unfurling array of data; and one must therefore also know when, how, and that one’s faith in the God of Jesus Christ is driving one’s breath and efforts, not the certainties of demonstrated reason.

In short, one must be ever willing to admit “how precious also are thy thoughts unto me, O God! how great is the sum of them!” (Ps. 139:17); and that when “I consider thy heavens, the work of thy fingers, the moon and the stars, which thou hast ordained; What is man, that thou art mindful of him?” (Ps.8:3-4); and so happily assert that “LORD, my heart is not haughty, nor mine eyes lofty: neither do I exercise myself in great matters, or in things too high for me” (Ps. 131:1). Scripture is replete with the diligent modesty of hushed confession.

Think this way; write this way; preach this way. That is one of my deepest hopes for those I leave behind.

In my years at Wycliffe, two blessings stand out among many. First, the common discussions I have had with colleagues and students together, around a table, in a classroom or a pub—where jargon was picked apart and discarded, where facts were laid bare and examined critically, where reasoning was tried out, experimented with, allowed to move here and be let go of there, all with the willingness to listen openly, offer humbly, and receive joyfully. Second, the common confession of our prayers in the Chapel, where, without insistence and manipulation, our lives came together with the unornamented admission that “we believe in God, the Father Almighty… and in Jesus Christ his only Son… and in the Holy Spirit,” and in the candid plea, “O Lord, hear our prayer.” These two blessings go together, and I am grateful that they have done so in my life these past years.