Learning to Pray in the Egyptian Desert 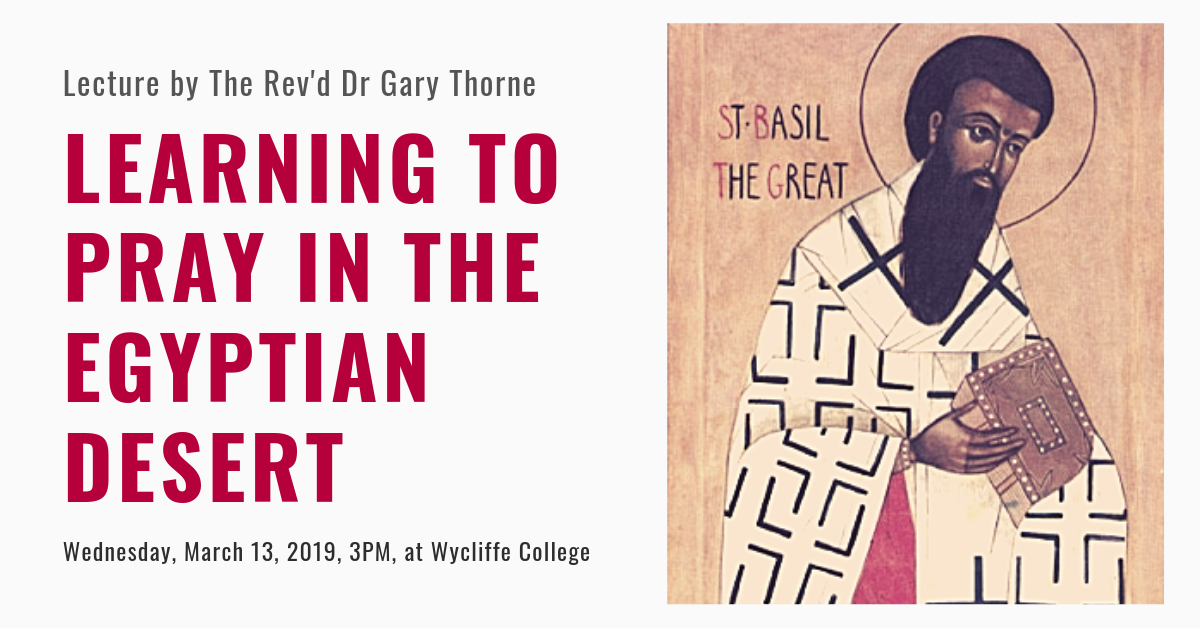 This is a free event. No registration is required.

Dr. Gary Thorne will deliver a lecture titled, "Learning to Pray in the Egyptian Desert."

Dr. Thorne is a previous recipient of the Scholarship of St. Basil the Great. This scholarship was established by the late Bishop Henry Gordon Hill in 1991 with the encouragement of the Archbishop of Canterbury, to facilitate an exchange between members of the Anglican Church of Canada and members of the Oriental Orthodox Churches and the Assyrian Church of the East.

Dr Gary Thorne became the Chaplain of Huron University College in 2018. A Maritimer by birth, he had previously served as chaplain to both King’s College and Dalhousie University for thirteen years.

He received an honorary doctorate from Wycliffe College in 2016 in recognition of his service to the Church (as a parish priest and, nationally, as a member of the Primate’s Theological Commission), and to the social welfare of inner-city Halifax. He was a founding member of the Halifax Humanities Program, a university-level course of study offered to those living in material poverty or with chronic psychological distress who have little or no access to traditional post-secondary education.

Dr Thorne is retired with the rank of Lieutenant-Colonel from the Canadian Armed Forces, having received several decorations, including being made a member of the Order of Military Merit, as a result of his service, including a tour with the United Nations Observer Force in the Golan Heights.

About the Scholarship of St. Basil the Great

The Scholarship of St Basil the Great was established in 1991 by the late Bishop Henry Gordon Hill through the encouragement of the Archbishop of Canterbury, to facilitate an exchange between members of the Anglican Church of Canada and members of the Oriental Orthodox Churches and the Assyrian Church of the East.

The following churches are included in the exchange:

St Basil Scholars have a unique opportunity to enrich their spiritual lives by immersing themselves in another dimension of Christian life. But it is not only the Scholars who benefit. Wherever the Scholars worship, study, and live, there is an exchange of ideas and experiences, which enables Christians to appreciate the diversity that exists within the Body of Christ. When Scholars return home, they are better equipped to lead others to discover the fullness of our common witness to Jesus Christ. St Basil Scholars have an opportunity to influence their communities in positive ways, encouraging an ecumenical spirit and sharing something of the rich tradition and life of other branches of the Christian Church.

The advisory committee of the Scholarship continues to seek Canadian Anglicans to go overseas and Oriental Orthodox Christians to visit Canada.