Episco-Paul: Was the Apostle Paul an Anglican? | Wycliffe College
Skip to main content

Episco-Paul: Was the Apostle Paul an Anglican? 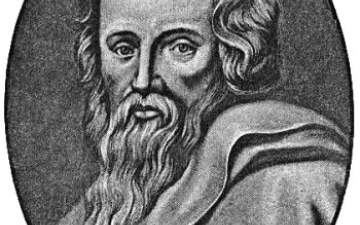 Wycliffe's Lord and Lady Coggan Professor Emeritus of New Testament, Terence Donaldson, muses on a question that has long occupied the minds of scholars: was the Apostle Paul an Anglican? With tongue firmly in cheek, Prof. Donaldson examines the evidence below.

We have recently celebrated the 500th anniversary of Martin Luther’s “Ninety-five Theses,” an event that marked a decisive step on the road to the Reformation. Luther’s criticisms of the church, of course, were grounded in his reading of Paul’s letters, and since then the Apostle Paul has had a special place in the churches of the Reformation. It is the Lutherans and the Presbyterians especially who have taken him as their own, and I know of at least some Anglicans who are prepared to say that these other churches are welcome to him. As one who has appreciated Paul for a long time, however (and who feels that Paul has not always been well-served by his Protestant interpreters), I do not count myself among this number.

In fact, I think that there are very good reasons to believe that Paul himself was actually Anglican. I was hoping that, in David Letterman fashion, I could present a top-ten list of reasons to believe that Paul was Anglican or (for our friends of American persuasion) Episcopalian (Episco-Paul, we might call him). So far, however, I have only been able to find seven. But seven is a pretty significant number in itself, and the seven reasons add up to quite an impressive case. Here they are:

(7) He ends all his letters with the grace (see especially 2 Cor 13:14).
(6) He wants everything done decently and in order (1 Cor 14:40).
(5) He encourages his young curate to drink wine for the sake of his health (1 Tim 5:23). We would have had a clearer indication of his Anglican leanings, perhaps, if he had said sherry, or, in some circles, scotch; but it’s close enough for present purposes.
(4) Young people found his sermons to be boring. One particular sermon caused a member of the youth group in the church at Troas not only to fall into a dead sleep but also to drop out of the church entirely (Acts 20:7-10).
(3) As we can see from 2 Corinthians 8 and 9, he had a hard time persuading his parishioners to contribute to the stewardship campaign.
(2) Like Henry VIII, he wasn’t prepared to accept the primacy of Peter (Gal 2:1-15).

And the number one reason why we can believe that Paul was an Anglican:

(1) He knew that when all other arguments failed, his parishioners would be convinced by the argument that this is the way it has always been done (1 Cor 11:16).

Of course, life always comes with its ambiguities, and I have to confess that there are some things about Paul that are not very Anglican at all. Here are three; perhaps you can think of others:

(1) Anglicans are known by their innate tendency to find obscure names for ordinary things—narthex, sacristy, vestry, warden, rector, sidesperson, mattins, collect, and so on—and Paul seems never to have heard of any of them.
(2) His sermons may have put people to sleep but they lasted much longer than twelve minutes (Acts 20:7).
(3) He was engaged full-time in evangelism and the development of new congregations.

Perhaps in the end, then, we should not try to claim Paul for ourselves, whether we are Anglican or Lutheran or Presbyterian or whatever. Instead let us join with all other Christians in being thankful for the legacy of Paul (and of Peter and all those “who were apostles before [Paul]”; Gal 1: 17) and for the faith that we all share.

Wycliffe College is an evangelical seminary rooted in the Anglican tradition. Our current student population represents more than 50 different denominational backgrounds. We offer programs of study ranging from certificate to master's and doctoral levels. Find your program here.