How do you know when you’ve gone too far: Lessons from an American Jezebel | Wycliffe College
Skip to main content

How do you know when you’ve gone too far: Lessons from an American Jezebel 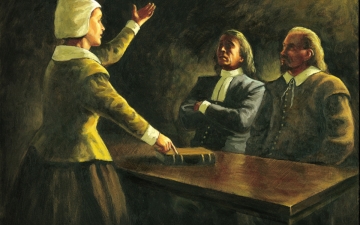 Anne Hutchinson (ca. 1591-1643) was a courageous woman who fought for many of the freedoms we now take for granted. The published account of her trial for sedition and heresy—before the Massachusetts General Court when she was forty-six and pregnant with her sixteenth child—illustrates why she has been memorialized as “a martyr on behalf of lay [biblical] interpretation.”[1] It also explains why the Governor of Massachusetts called her a ‘jezebel’—an impudent and unrestrained woman, who like King Ahab’s powerful Phoenician wife Jezebel, stepped out of her place, daring to oppose and control civil and religious authority figures, and in the case of Hutchinson, to teach and influence men and vulnerable people.[2]

Anne Hutchinson was the well-educated daughter of an English Anglican cleric and educator. She came under the influence of nonconformist John Cotton and followed him with her husband and growing family to the Massachusetts Bay Colony in 1634. She served the community as a midwife and initiated weekly meetings where her lively comments on sermons and Scripture drew crowds of women and men. Three years later, she was charged with heresy and sedition and judged “a woman not fit for our society” and banished “from out of our jurisdiction.”[3]

Forty male experts of the court examined Anne Hutchinson on, among other issues,  the propriety of her popular weekly meetings. In her Scripture-laden defense, she cited “a clear rule in Titus [2:3-5], that the elder women should instruct the younger.”[4] But Governor John Winthrop countered that her seditious and rousing teaching went far beyond what he imagined Titus had in mind—namely, “that elder women must instruct the younger [women and not men] about their business, and to love their husbands and not to make them clash.”[5] In his attempt to trap Hutchinson into admitting that she was authorized to teach men, the governor presented her with a case study: “suppose that a man should come and say, Mrs. Hutchinson I hear that you are a woman that God hath given grace unto, and that you have knowledge in the word of God. I pray instruct me a little, ought you not to instruct this man?” She said cheekily, “I think I may—Do you think it is not lawful for me to teach women and why do you call me to teach the court?” The flustered governor quickly clarified, “We do not call you to teach the court but to lay open yourself.”[6]

The governor, undoubtedly bristling and flushed by Hutchinson’s audacious suggestion that the court was asking her to teach them, contended that Hutchinson’s Titus rule contradicted the apostle Paul’s rule that silenced and subordinated women in 1 Corinthians 14:34-35. Hutchinson’s brief rejoinder, that Paul’s teaching was “meant for some public times” surprised the governor who tried to egg her on to say more, which she wisely refused to do.[7] Governor Winthrop lost composure at this point and declared Hutchinson’s unorthodox practices unauthorized, “prejudicial to the state,” and damaging to “honest” and “simple souls” and family members being neglected by those attending her meetings.[8]

On the second day of her trial, Anne Hutchinson disclosed her sense of prophetic authorization. She gave account of her experiences of “immediate revelation,” which she explained as “the voice of [God’s] own spirit” speaking to her soul through the Scriptures.[9] Hutchinson likened her own experience of the trial to Daniel’s experience in the lion’s den and declared that like Daniel, she would be delivered. [Dan 6] Confident in the ultimate outcome of her trial, she donned her prophetic mantel, and boldly judged her lion-like examiners: "You have power over my body but the Lord Jesus hath power over my body and soul; and assure yourselves thus much, you do as much as in you lies to put the Lord Jesus Christ from you, and if you go on in this course you begin, you will bring a curse upon you and your posterity [Mal 2:2-3], and the mouth of the Lord hath spoken it [Is 40:5]."[10]

Hutchinson’s conviction and banishment were followed by a church trial in 1638 that led to her excommunication and deliverance up to Satan [1 Cor 16:22] in hope that she would no longer blaspheme, seduce, or lie.[11] The Hutchinson family and their supporters moved to Rhode Island. After the death of her husband in 1641, Anne moved to the Dutch settlement of New Amsterdam where she and six of her children were killed by Wecquasgeek and Siwanoy retaliating against the brutality of Kieft’s War in 1643.

In 1987, Michael Dukakis, the governor of Massachusetts officially pardoned Anne Hutchison. On the State House monument erected in her honor, she is memorialized as a "courageous exponent of civil liberty and religious toleration.”

I believe she should also be recognised for her commitment to the authority of the Scriptures, her understanding that God continues to speak to us through the Scriptures, and her vision that lay women as well as men should interpret Scripture.

Marion Taylor is Professor of Old Testament at Wycliffe College, University of Toronto.

[9] For example, in answer to her examiner’s question, “How do you know that that was the spirit?” Hutchinson retorted: “How did Abraham know that it was God that bid him offer his son, being a breach of the sixth commandment? She also shared that “the Lord shewed me what he would do for me and the rest of his servants” through the words of Jeremiah 46:27-28.” Ibid., 337.