The Holocaust, Religious Leadership, and Contemporary Ethics: a Wycliffe Student’s Journey to Germany and Poland 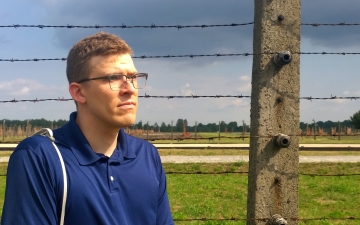 The Rev. David Clark, pictured in June 2017 at the site of the Auschwitz II (Birkenau) concentration camp

This summer, as a Fellow with “Fellowships at Auschwitz for the Study of Professional Ethics” (FASPE), I travelled to Germany and Poland to study the history of the Holocaust and to explore contemporary professional ethics. As FASPE explains, the program provides “business, journalism, law, medical, and seminary students with a 12-day trip to Germany and Poland where the actions of professionals during the Holocaust and in Nazi Germany serve as a backdrop for an intensive course of study on the current ethical challenges in their fields.” As a Seminary Fellow, I became part of an inter-faith group of seminary students and early-career clergy, led by Dr. Kevin Spicer (Professor of History at Stonehill College and a Roman Catholic priest) and Rabbi James Ponet (Yale University Howard M. Holtzmann Jewish Chaplain Emeritus).

Employing what FASPE calls “the power of place,” the program meaningfully pairs the content of seminars with historic sites: as we visited places where the Holocaust was planned and perpetrated, we engaged in intensive discussions of ethics that connected with those locations. Gathered in the mansion where German officials convened the infamous Wannsee Conference in 1942, we considered ethical questions surrounding the human capacity for evil. Gathered in a room directly beneath the Memorial to the Murdered Jews of Europe in Berlin, Jewish and Christian FASPE Fellows discussed how biblical texts have been used to bolster antisemitism.

In addition to visiting sites related to the mass murder of European Jews, Fellows had opportunities to glimpse hints of the vibrant Jewish life and community that flourished in Eastern Europe prior to the Holocaust. For instance, just before visiting the Auschwitz I concentration camp, Fellows had the remarkable experience of gathering silently in a reconstructed synagogue at the Auschwitz Jewish Center in Oświęcim.

Throughout the program, Fellows focus on professional ethics, exploring how the complicity of professionals facilitated the murder of millions of Jews (as well as other targeted groups). Each FASPE cohort considers the roles of professionals from their own fields: Medical Fellows, for instance, focus on the involvement of German doctors in the Holocaust. On my trip, Seminary Fellows explored the ethical failures of Christian leaders during the Holocaust, reflecting on what this teaches about responsible religious leadership today. I found this approach illuminating and challenging, particularly since my doctoral research centres on Christian responses to Nazism and the Holocaust.

As a final note, I should mention that Wycliffe students would be eligible to apply for this international program. Since FASPE covers all expenses (including transatlantic travel, accommodations, and meals), participation incurs almost no cost to Fellows. Any interested students can visit the FASPE website.

The Rev. David Clark is a third-year student in the Ph.D. program at Wycliffe College. His research focuses on Dietrich Bonhoeffer’s interpretation of the Old Testament during the Nazi period, including the implications for post-Holocaust Jewish-Christian relations. For his research on Bonhoeffer, David was recently awarded a SSHRC Doctoral Fellowship.