Lessons on the World Day of the Poor: Pope Francis and the anonymous Jesus | Wycliffe College
Skip to main content

Lessons on the World Day of the Poor: Pope Francis and the anonymous Jesus 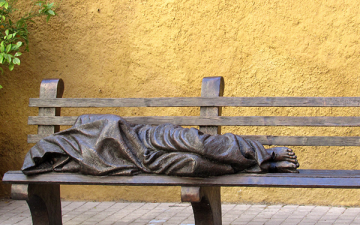 I found Jesus a seven-minute walk from Wycliffe College. At first, I could not quite recognize him. Lying on a park bench, thickly covered with an old blanket, he was layered with snow. As I sat down on the bench beside him, though, I noticed his feet. The gaping instep wounds gave me pause, and then the crucifixion “aha.”

Though hard and bronzed, the life-sized sculpture invites a rest on his bench. Once you know the way, this nearly incognito Jesus is not hard to find: traverse southeast through Toronto’s Queen’s Park, head through the traffic lights, and find yourself at the front entrance of Regis College. Yes, Jesus is at Regis, and you can sit beside him for as long as you like. Day or night.

In a contemporary twist of irony the Homeless Jesus sculpture initially could not find a home; “nowhere to lay his head.” Authorities in archdioceses in Toronto and New York rejected the piece. Others – perhaps unfamiliar with the powerful Gospel texts that inspired it – labelled it controversial, generating a backlash.

But these days Schmalz’s bronze characters are finding a global welcome. And they have a new champion in the Vatican’s head of state, whose same championship of the vulnerable, poor and marginalized continues to cause a global stir. Just weeks ago, Pope Francis oversaw the unveiling of “Angels Unaware,” another of Schmalz’s visual bronze translations of the Bible, in St. Peter’s Square in Rome. His bronze crowd of 140 weeping, joyful and frightened migrants and refugees is a dramatic and timeless representation of their journey, and a biblical call to the faithful, summed up by the Pontiff in four verbs: “to welcome, protect, promote and integrate.”

International days of celebration and remembrance are most often declared by the United Nations, but this one comes from Rome. The World Day of the Poor is a recent invention, launched by Pope Francis in 2017 as an annual celebration to occur on the 33rd Sunday of Ordinary Time. This year it fell on Sunday, November 17. Homeless Jesus sculptures were unveiled in numerous locations around the world to mark the Day.

Why does the Pope think the world needs Homeless Jesus and the World Day of the Poor? In his original message for the Day’s launch, Francis insists that:

"The marginalization painfully experienced by millions of persons cannot go on for long. Their cry is growing louder and embraces the entire earth… The option for those who are least, those whom society discards is a priority that Christ's followers are called to pursue, so as not to impugn the Church's credibility but to give real hope to many of our vulnerable brothers and sisters."

The Roman Catholic Church and its 1.3 billion adherents are nothing if not diverse, especially on the issue of poverty and its range of drivers and solutions. Politically, socially, and economically, Catholics occupy every available ideology, wealth bracket, and social niche on the planet. And the church of Rome somehow manages to shelter beneath its broad umbrella the whole gamut: from wealthy elites to activists of liberation theology, from the voices of conservative pundits to the prophets of the “preferential option for the poor” and Catholic social thinking. But the current Pope is unshakable in his resolve to reinvigorate those biblical and foundational practices of the faithful which will crush local and global poverty, and expose those he described as “the arrogant and ungodly” who hound the poor and leave them “harassed and exploited.”

Francis’ 2019 message for World Day of the Poor incorporates the solemn tones of a pope with the hard edge of difficult scriptures. A few lessons from the Pope:

The Pope articulates the paradox of the Homeless Jesus and the poor, as a cord richly interwoven into the fabric of the “now-not-yet” reign of God.

Some cold winter evening, go have a sit with the Homeless Jesus. And listen for the voice of Francis.

David Kupp is Professor of Pastoral Theology at Wycliffe College.  This winter, Wycliffe is offering a course entitled, "Who Is Jesus?" exploring the understandings of various New Testament authors that Jesus is the One who saves.