Some pushback to Albert Mohler’s pushback 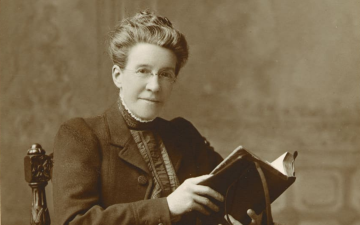 Albert Mohler is blowing up the Internet.

In his inflammatory response to the first ordination of three women as pastors in the SBC-affiliated Saddleback Community Church in California, the president of The Southern Baptist Theological Seminary writes: “Simply put, the only way to affirm women serving in the pastoral role is to reject the authority and sufficiency of biblical texts such as 1 Corinthians 14 and 1 Timothy 2.”

To which I would respond, “Simply put, the only way to deny that the New Testament church affirmed women serving in the pastoral role is to reject the authority and sufficiency of biblical texts such as Romans 16, which lists women like Phoebe, “a deacon of the church at Cenchreae”; Prisca, who works “with [Paul] in Christ Jesus” (and who, the apostle indicates, together with her husband hosted a house church and “risked their necks” for his life); Mary, who “worked very hard among [the church at Rome]”; and Junia, who was in prison with Paul and whom he considered “prominent among the apostles.” Look it up. The list goes on.

With his vitriolic pushback against the ordination of women as pastors Mohler joins the great company of men throughout history who have tried to restrict women’s roles in the church.

Mohler’s call to reclaim the church for men echoes that made by Christian men in the early 20th century who tried to silence women’s voices and circumscribe their ministries. Fiery Welsh revivalist Jessie Penn-Lewis (1861-1927), for example, whose preaching drew crowds in the thousands all over Britain and in Europe, Canada, the United States, India, and Egypt, was one of the women that the male trustees of England’s Keswick Convention tried to silence. Penn-Lewis was not easily bullied. She was convinced of the legitimacy of God’s call of women into ministry and fought back. In 1906, she publicly called out Keswick’s trustees:

“It will be of very grave importance to the whole Church of Christ if Keswick officially sets its face against women speaking to audiences when, at this time, God is using women in a very marked way. The whole current of life moving through the spiritual Church is towards clear and open ground for women in the work of God. I have been invited to take a service in one of the chapels and I have no alternative but to accept. I cannot stay in line without a sacrifice of principle and a disobedience to God. The Lord has set the seal of blessing on my messages at Keswick, where many have come up to receive the message not the messenger. Out of loyalty, I must state the people’s wishes.”[i]

Penn-Lewis continued in successful public preaching, teaching, and publishing ministries until her death. Even the grave did not silence her voice. But after Penn-Lewis’s death, the editors of posthumous editions of her popular War on the Saints (1912) added the following disclaimer that was not removed until 1973:[ii]

“It is necessary for us to add this disclaimer since War on The Saints was written by a woman, and according to the ordinance of our Bible, women are not allowed to teach nor to usurp authority over men, but to be in silence (1 Tim. 2:12). We do not believe in women pastors . . . There is simply no New Testament authority for a woman to openly or aggressively present herself as a teacher of religious doctrine to men. There are now women preachers, pastors (and worse yet) missionaries . . . the Bible and 1900 years of theological consensus disallow women from these Church Offices . . . Because War On The Saints is a book, and because the author is no longer with us, it cannot be said that she is in any position to usurp authority over any man. The book is simply available for any man or woman who cares to solicit the author’s opinion on the matter she addresses. . . . If it is indeed permissible for a woman to contribute to the public discussion of our Faith, Jesse Penn-Lewis has made an invaluable and prophetically significant contribution, in our opinion.”[iii]

The strained logic in this disclaimer reflects both a sense of longing for the way things used to be and confusion with respect to the value of women's biblical interpretations.

The Christians who sought to muzzle Penn-Lewis were part of a transatlantic movement to reestablish traditional gender roles and the ideology of the Victorian middle-class, and in the United States in particular, to reclaim the church for men.[iv] Propagators of this movement barred women from the Pastor’s Class at Moody Bible Institute—the last women graduating from this program in 1929. They excluded women members from the Association of Independent Fundamental Churches of America in 1930. They capped the number of women students to one-third of the total at Gordon College in 1930. They hired men to replace female professors, pastors, and women in leadership positions.[v] Changing gendered moral visions discouraged many women from pursuing vocations in ministry or undertaking studies of theology. Instead, women were encouraged to take up “more appropriate” service-related professions for women such as teaching, nursing, library science, and social work.[vi]

Mohler’s pushback is part of a larger movement to masculinize the church of the 21st-century that so strongly echoes that of the early 20th century. May the women whose ministries are being challenged today have the courage of Jessie Penn-Lewis, who recognized that her enemies were both human and spiritual.