The Voice of the Old Testament 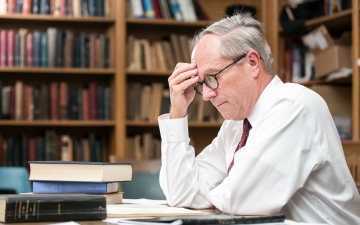 One of my goals in college was to get the grades necessary to apply to a top law school. I happened to take a course in Old Testament and the Professor asked me to stay on and be a teaching assistant. In my junior year, he was preaching in Charlotte NC and had a heart attack (he was mid-sixties). I went to the funeral and afterward his widow asked me to pick out three books from his library. I did. She then added a big book to my pile. A Brown-Driver-Briggs Hebrew Lexicon. It must have had a voice of its own, as I ditched the idea of law school and instead went to Virginia Seminary. I learned Hebrew (with the father of Toronto School of Theology’s Professor Judy Newman) and read Hebrew prose and then poetry texts in his office. That was 42 years ago, now.

We are wrapping up a PhD seminar this semester on the part of Isaiah often called “Second Isaiah.” This was the section I read with Murray Newman. He had me memorize the Hebrew of Isaiah 40. “Comfort, comfort my people” – our Advent text for last Sunday. Memorization never goes away. We ought to be asked to do more of it.

The culmination of these Isaiah chapters comes in Isaiah 53, commonly referred to as the Suffering Servant Song. It recounts the physical assaults born by an unnamed servant of God, as these are anticipated in earlier chapters 49 and 50. Wounded, bruised, disfigured, silent under persecution and finally death. The Psalms and Jeremiah also contain these same themes. The righteous sufferer. But here the blows and stripes are confessed to be received on behalf of others and in the place of what was rightly their own punishment. We reckoned him smitten by God and afflicted. By his stripes we are healed. The Lord laid on him the iniquity of us all. God will lift him up and in some way he will see success through this sacrifice.

No Christian reader of Isaiah 53 can locate this in past time only. It seems to fit perfectly with what we know of the work of Christ on the cross. The unnamed one finds a name.

New Testament scholars like to ask questions like, “Did Jesus understand his mission based upon Isaiah 53?” Certainly, Mark has Jesus say he gives his life as a ransom for many, and the language is close, if awfully compressed, given the extensive line-by-line account we have in Isaiah. Others say, “No, it is Paul’s idea.” What is being noticed here is the absence of reference to the details of Isaiah where we might well expect the New Testament to record them. At the cross the psalms are more present than Isaiah’s rich account.

The significance of the first witness

My point here is not to enter into this kind of debate, which could pose the wrong questions to texts not interested in them in the same manner. For the earliest Christians the Old Testament was the only scriptural witness. Measuring its force by how it is used may reduce an overflowing fountain to this or that deep drink. The presence now of a framework in which two testaments sit next to one another in a single Bible makes this kind of question arise, but it can also get out of proportion the significance of the first witness. Testimony to Jesus is “in accordance” with this witness, and by this is reserved the right of the Old Testament to sound its own special Christian notes. I doubt Paul thought his readings of the Scriptures were determinative of its ongoing divine voice.

When I was growing up, Good Friday liturgy (Seven Lasting Words and a special set of texts for the day) set side-by-side the New Testament passion accounts and Old Testament readings from Lamentations, Jeremiah, and Isaiah. What we get in Isaiah especially is language to bring to the cross. The “we” who were not there. All we like sheep have gone astray and the Lord laid on him the iniquity of us all. Is it nothing to you, all you who pass by? Look around and see. Is any suffering like my suffering? Here we do not have past and present, old updated by new, but one choir of response across the ages. What we hear in Isaiah we do not hear in the New Testament at the cross, as the Man of Sorrows went there alone, betrayed, and abandoned by those he loved to the end, save a few sorrow-struck mourners and Roman guards. Even here Isaiah has its voice. Kings shall see and shut their mouths, for that which was not told them they shall come to understand. Not at the cross, but in God’s sure time.

This isn’t Old Testament prediction out of its own context, and fulfillment at a later point in time but a genuine participation in something eternal and providentially prepared by God. Prepared for us, so that we might have voice, alongside Israel, having been brought near by the one cross.

The first PhD student I supervised in the Wycliffe-Toronto School of Theology context was Brian German, a Lutheran Church Missouri Synod pastor and now Old Testament Professor. He wrote on Luther’s psalm lectures. We stay in touch and he often sends me nuggets from the period he lovingly refers to as the “Age of Orthodoxy” – Lutheran commentary, homily, meditation in the generation following Luther.  I want to share a note he sent me, in response to a book I had published. Surplus is the image we are trying to get at here. A surplus that serves as a key from the first witness to help unlock the second. This is a direction of influence historically oriented scholarship has screened out. He writes:

“I’ve been struck recently by the kind of “surplus” that I see in the early Lutherans now largely overlooked, something which can already be spotted to some degree in the later Luther (his Genesis lectures).  In Joseph’s turning away from his brothers and weeping, for example, “you see in what spirit Christ punishes those who are His and what a fiery furnace of love…there is” (LW 7:260).  The ‘surplus’ on this account is not just that Joseph’s story figures forth (figuraverint) the passion of Christ but also the life of the church in any age. W. Bidembach (1538-72) follows Luther’s Joseph here: he urges to read Joseph with the passion so that we ‘may view the old Passion as though it were painted with new colors.’ For Bidembach, the [Old Testament] offers Christological reflection unavailable in the [New Testament]. So, how did the incarnate Son of God die? In the Joseph account is a surplus bearing witness: even in the pit (death), Joseph lives. Also fascinating is Salomo Glassius (1593-1656) on typology more generally: ‘Often there is more in the type than in the antitype.’”

Perhaps most intriguing is Gerhardt’s An Explanation of the History of the Suffering and Death of our Lord Jesus Christ (1663), which is loaded with the language of “key” throughout. One can certainly read the passion by itself, but it cannot be “unlocked” for Gerhardt unless it is read in conjunction with Old Testament texts. So, for Gerhardt, when you read the passion alongside Zechariah 13’s “Strike the shepherd,” he explains: “Everything which Christ experienced…is to be examined as if God Himself is doing it… Sword, arise over My Shepherd and over the Man who is next to Me. Strike the very same Shepherd. Accordingly, as we hear how Christ was bound, struck, wounded, and tortured, we are thus to view it as if God the Lord was standing there, beating, wounding, and binding Him … God therefore seized upon Him…and punished Him on account of the sins that were laid upon Him…” (Isaiah 53’s “will of the Lord to crush him” also factors in here).

The Old Testament is not old

Advent is the season now upon us. Immanuel is a reality in Isaiah’s own day. And on that basis, and in fulfillment and in accordance with his words, we confess Jesus Messiah and Lord. He came as Light from Light, and he will come again to complete what he set in motion in the First Advent. Wolf will lie down with the lamb. Isaiah’s word will find its true fulfillment when at last first and second advent rhyme.

He shall be called Wonderful Counselor, Mighty God,
Everlasting Father, Prince of Peace.

For the earth will be filled with the knowledge of the Lord
as the waters cover the sea.

The Old Testament is not old. It is as much in front of us as behind us. It is a surplus book. Its keys open up the New and speak through it to us today. That is its God-given vocation (Romans 15:4).