Of Canons, Friendship and Wycliffe College 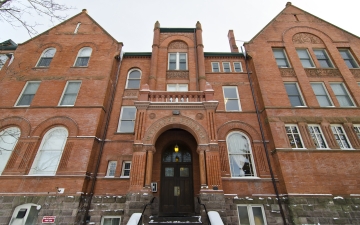 If you haven’t grown up in the Anglican (or Episcopal) Church, you might think a “Canon” is just a fancy kind of camera. But to those familiar with Anglican tradition, a canon is much more. And now, Wycliffe College can boast of two new canons within its close knit family.

The positions were formally conferred on Annette Brownlee and Ephraim Radner, both professors at Wycliffe, during a late afternoon service of sung Scripture and prayer on Sunday, January 15, 2017, in Dallas, Texas. The Bishop of the Episcopal Diocese of Dallas, George Sumner, bestowed the honours.

So, what is a canon?

“Being made a canon is a way of recognizing the contribution of someone to the life of the church,” explains Stephen Andrews, principal of Wycliffe College. “The fact that Ephraim and Annette have been given such an honour indicates the value of their ministry beyond Wycliffe College or the Anglican Church of Canada.”

“An honorary canonship recognizes service over many years,” adds Kimberly Durnan, spokesperson for the Diocese of Dallas. “Both Radner and Brownlee have served selflessly as priests, teachers and mentors. We recognized Radner as a renewer of Anglican theology in our time, and Brownlee as a model for a generation of women in ministry. Naming these distinguished priests as honorary canons also recognizes a friendship between the Episcopal Diocese of Dallas and Wycliffe College.”

Radner and Brownlee have served the Diocese of Dallas for years, together as a married couple, and individually, in various ways, including at conferences, talks, through courses, providing counsel and more.

But the friendship between the two institutions is – like true friendships always are – rooted in a personal one, which began when George Sumner served as Wycliffe’s ninth principal (from 1999 to 2015).

“It is certainly a humbling honor to be considered a vital servant of the wider church,” says Ephraim, “In this case the Diocese of Dallas, for which we have great admiration due to its energy, mission orientation, and very fine people – clergy and laity both.”

“It is good that Wycliffe is proving a servant to the wider church – even in a publicly recognized way,” adds Annette. “But Wycliffe has been serving the wider church in many ways, quite concretely, without such recognition:  in Gambia, in Egypt, in Singapore, in East Africa, and in a host of Canadian and American locales. So, here we have a kind of symbolic recognition - of a reality that is much broader and deeper - of the ministry of Wycliffe.”

Kudos to the College

The honour shines a light on the fact that Wycliffe faculty and personnel are deeply committed to a ministry that reaches beyond the College walls, one that seeks to make gifts and resources available for the wider church.

“I was delighted by the news of this dual honour,” says Stephen Andrews, “and believe that Ephraim and Annette will be a valuable resource to the Diocese of Dallas, and will help to promote the College as the primary centre for theological engagement in North America that it is.”