Christianity: more than a European transplant for Indigenous Peoples in Canada 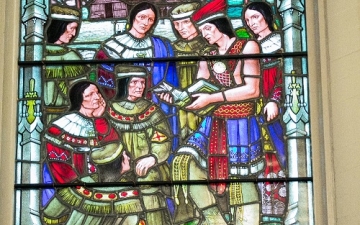 A stained-glass window in Founders' Chapel, Wycliffe College, depicts the sharing of the gospel with Indigenous people. In 1804, the year of its foundation, the British and Foreign Bible Society made its first grant for the translation of the Scriptures into a non-English language. 2000 copies of John’s gospel in Mohawk-English were printed. It was the work of John Norton, a chief of the Six Nations.

The large majority of Indigenous people in Canada call themselves Christian. In the 2001 census, of about 1,360,000 respondents self-identifying as Aboriginal, 42% said they were Roman Catholic, and 22% some form of Protestant. (“No religion” was the response of 28%, and 2% followed Aboriginal spirituality.) True, there are numerous issues with the coverage of this census, the quality of the data, and the way questions were framed. But it looks as if roughly two-thirds of First Nations, Inuit, and Métis people in Canada claim Christianity as their religion.

Such a high proportion of Christians might well be surprising. We might have expected that as Indigenous peoples reclaim their pride in their traditional cultures, they might set aside this settler import, Christianity. Moreover, we might not blame them for being bitter at how western Christians have treated them. In particular, in the residential schools that our Christian churches managed, thousands of children died, many thousands more were abused, and almost all experienced profound contempt. The explicit purpose of their so-called education was to take away their Indigenous identity and to eliminate First Nations culture. How could people victimized by Christians claim to be Christians themselves?

The answer is that each journey is different. Wab Kinew, the Cree broadcaster who is now the NDP leader for Manitoba, told his father’s story in his best-selling The Reason You Walk (2015). At his Roman Catholic residential school, Kinew’s father had to bury shame and anger deep within him, but he also connected with Christ through a kind young priest and through Holy Communion. For many years afterwards, he had to struggle through humiliating memories, personal dysfunction, and family pain, but he had loyal family and friends, was touched by Prime Minister Harper’s apology to residential school survivors, and met a caring pastor in Archbishop James Weisgerber of Winnipeg.

In the recent scholarly anthology Mixed Blessings: Indigenous Encounters with Christianity in Canada (UBC Press, 2017), the editors state the heart of it: Christian residential schools caused a lot of damage, but Christian faith and caring have helped many survivors find healing and comfort.

A little more deeply, it’s wrong to suppose that the Christianity that developed in Indigenous communities was simply a European transplant. It was inculturated by Indigenous catechists, lay pastors, singers, and preachers who were often invisible to, or at least underrated by, the western missionaries. Just as seventh-century Christians in England linked the gospel to Anglo-Saxon and Celtic spirituality (see: Christmas trees), Indigenous peoples in Canada negotiated cultural distances as they appropriated the missionaries’ gospel. In other words, Christianity, for many, became part of their identities as Indigenous people. Hence their responses to the census takers.

What’s the next step? The Anglican world is a communion of national churches, and just as in 1893 it was time for the Church of England in Canada to break free from the mother country while maintaining bonds of affection and lines of communication, it’s time now for First Nations and Inuit Anglican churches to do something similar. They don’t need to remain under the tutelage of those of us who are relative newcomers in this land. Their Christian life will be the stronger for that. And that will help the rest of us too.