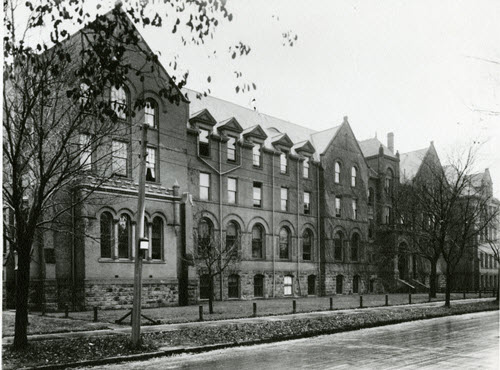 Wycliffe College was founded in 1877 by an evangelical Anglican organization called the Church Association of the Diocese of Toronto. This group, centred at Toronto’s St. James' Cathedral, had formed four years earlier after a group of church leaders had campaigned to exclude evangelicals from important offices and committees in the diocese (the large territory which the bishop administered). It had been a bitter divide.

The Association championed the doctrinal points of the English Reformation—particularly the principle of the priesthood of all believers—and going up against the bishop, the archdeacon, and the great majority of clergy, it advocated for the rights of regular church members in matters of church governance, simplicity in worship, and ecumenical relations with other Protestant denominations, especially in postsecondary education. It held meetings, published tracts, established a weekly newspaper, became involved in church politics, and gave financial support to evangelical clergy and students. Its most lasting contribution was the Protestant Episcopal Divinity School, which first met in the schoolhouse of St. James' Cathedral. Nine adventurous students met under the leadership of the Reverend James Paterson Sheraton, a parish priest from the Canadian Maritimes who had just been appointed the College's principal and first professor.

The school grew rapidly, and in 1881 moved into its own building in the area of the University of Toronto. That year was the five hundredth anniversary of the traditional date of the first English Bible, which had been inspired by the teaching of the Oxford priest and professor John Wycliffe. It seemed fitting to name the building Wycliffe College, and the name was soon extended to denote the school itself.

In 1885 the College affiliated with the University, and in 1889 it became one of the federated colleges. In 1891 the College moved to its present site on Hoskin Avenue, and was formally approved as an Anglican theological college.

Wycliffe was incorporated in 1879 for the purpose of “providing for the training of theological students in accordance with the principles of the Reformation as embodied in the Articles of the Church of England.” The College is managed according to the Wycliffe College Act of the Ontario provincial legislature, 1916, amended in 1932, 1949, 1952, and 2002.