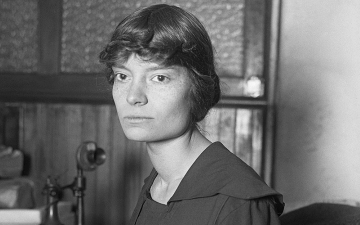 With World Writers Day having been celebrated earlier this month, and World Book Day (as declared by the United Nations) coming up on April 3, it seems a fitting time to revisit the story of 20th century journalist, author, and social activist Dorothy Day.

“How monotonously alike all the great tyrants and conquerors have been;

how gloriously different are the saints.”

Dorothy Day fits C.S. Lewis’ “gloriously different,” and the Vatican has decided she’s on her way to sainthood.

Day’s early life tells a complicated story, a rambunctious and articulate pursuit of meaning and authenticity. Born in 1897, in her teens she was already a Greenwich Village bohemian literati, in her 20s a single mother, a veteran of women’s rights campaigns, a known voice in the socialist press, with life-defining experiences of abortion, failed marriage, and two suicide attempts behind her. She enunciated the causes and issues of socialists, trade unionists, industrial workers, and anarchists.

And at 30, dramatically, passionately, Dorothy Day converted to Catholicism. Amidst the dark days of the American Depression, hers became a life of tireless compassion in the Christian fight for the poor and oppressed. She engaged in countless acts of disobedience, and was frequently jailed. She poured her considerable literary energies into 40 years of editing the Catholic Worker newspaper, cofounded with Peter Maurin, offering progressive teaching on Catholic social justice. The Catholic Worker became the foundation for a series of autonomous Catholic Worker communes and houses of hospitality, intentional communities that fed and sheltered the poor. More than 200 still exist to this day across the U.S., Canada, and beyond.

Her decades of mobilized services to the poor, her biblical, theological and political critique of the systems that shackled the poor, her invitation of thousands of volunteers to join in all reflected her personal piety and generosity.

Her vital and difficult story provides perhaps one reason why Pope Francis singled Dorothy Day out for praise. In his electrifying address in Washington DC on September 24th, 2015, he included Day in a quartet of Americans, with Thomas Merton, Martin Luther King Jr and Abraham Lincoln.  In his challenge to the US Congress (a first for a Pope), Francis called for action on poverty, climate change, immigration and capital punishment, and he hailed Day as an icon of social justice and rights.  Rush Limbaugh was apoplectic; Bernie Sanders was delighted; Donald Trump was dismissive.

“Her social activism, her passion for justice and for the cause of the oppressed, were inspired by the Gospel, her faith, and the example of the saints,” said the pontiff.

Daniel Berrigan was a member of Dorothy Day’s uniquely-gifted 20th century Catholic cohort of writers and activists (along with Thomas Merton, Flannery O'Connor, Walker Percy, John Courtney Murray, John Kennedy Toole and others). Also jailed as an anti-war activist, Berrigan articulated American Catholicism’s deep debt to Dorothy Day. He would write that while reading Miller’s history of Day and the Catholic Worker:

"I stayed up all night, unable to put the book aside. What held me in thrall was an absolutely stunning consistency.  No to all killing. Invasions, incursions, excusing causes, call of the blood, summons to the bloody flag, casuistic body counts, just wars, necessary wars, religious wars, needful wars, holy wars—into the fury of the murderous crosswinds went her simple word: no."

In the end, few Catholics in America have ever grappled more profoundly, or written and marched more passionately, about the social and political structures that exclude and marginalize. The integrity of her positions on peace, justice, the sanctity of life and Jesus’ Gospel are compelling.

For that reason Day is near the top of any short list of influential 20th century Catholics in America, her impact head and shoulders above virtually any ordained male clergy.  Whether or not in the end the Catholic Church does canonize her (the case has been progressing since 2002), many insist that Dorothy Day is a saint, however unconventional. Others chafe at the prospect. She would, of course, be in good company: an odd amalgam of unconventionality measures largely throughout the panoply of saints, early, medieval or modern.

Sainthood: comes with a cost

But there can also be costs to sainthood, insists Kate Hennessy, who in, Dorothy Day: The World Will Be Saved by Beauty: An Intimate Portrait of my Grandmother offers an unvarnished biography of the complicated and loving relationship between Dorothy Day and her mother Tamar. The canonization process is bureaucratic, rigid and legalistic, she says – the very antithesis of her grandmother’s complexity and paradox. In an interview published in The Catholic Agitator, she is quoted as saying:

“And of course, there is another fear… that is shared by many Catholic Workers — that she will be simplified, watered-down, her radicalism will be erased, and she will become a one-topic saint. Like, for example, becoming the anti-abortion saint.”

The ambivalence of Dorothy Day devotees about her pending sainthood has numerous dimensions: that it misses the point, that her prophetic edge risks dulling, that the cost ($1 million for testimony, archiving, canonical lawyers, paperwork, ceremonies) looks profoundly unlike the Catholic Worker.

Day herself may have feared the prospect when sainthood was suggested. “Don’t call me a saint,” she famously said. "I don’t want to be dismissed that easily.” Might the Vatican’s betrayal now of this appeal have provoked her famous scowl?

Over time, saints may become shiny and hagiographically enveloped. Thirty-five years after her death, however, Dorothy Day’s profound legacy is intensifying, less from an imposed halo, and more from the compelling authenticity of her own urgent calling, now passed to us.