Faithful Preaching of the New Testament Involves the Old Testament 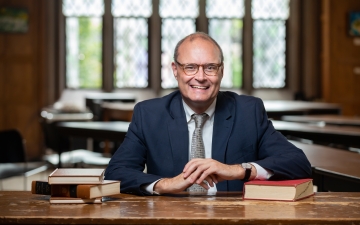 In class the other day we were discussing the crucifixion narrative in John’s Gospel. John 19:29 records that when Jesus was on the cross he was given sour wine to drink: “they put a sponge full of wine on a branch of hyssop and held it to his mouth.” I asked, “Why hyssop?” For hyssop is not a particularly tall plant so one of its branches does not seem the most obvious means by which to lift something up to a crucified man. Some faces were blank but then one of the students experienced a flash of recognition: “Hyssop is what was used to daub the blood of the lamb on the lintels and posts of the doorways in the Passover narrative!” (Exodus 12:21-27).

The student was exactly right. In Exodus the final tragic consequence of the sinful refusal of Pharaoh to release God’s people is the death of the firstborn of the Egyptians. The judgment of God passes over the houses of the Israelites who have obeyed God’s instruction to mark the doors of their homes with the blood of the Passover lamb. In the detail about the hyssop branch the evangelist John is presenting the death of Jesus in Paschal terms.

By itself this detail about the hyssop branch might be regarded as a coincidence and my drawing of the connection with the Passover lamb as a piece of over-interpretation, but the detail is not in fact alone. The narrative goes on to insist that, unlike those crucified with him, Jesus’ legs were not broken by the Roman soldiers (John 19:33). The evangelist argues that this happened in order to fulfill the scripture: “None of his bones shall be broken” (John 19:36). Psalm 34 insists that God will rescue the righteous who suffer unjustly and that their bones will not be broken. However also in view are the instructions for the Passover lamb in Exodus 12:46 and Numbers 9:12. Both these texts insist that the bones of the Passover lamb are not to be broken, and Jewish tradition linked together the Psalm text and the instructions about the lamb (Jubilees 49:13).

Further, before describing any of the details of Jesus’ death, the evangelist has noted that it was the day of preparation for the Passover (John 19:14). This means that at the time Jesus was on the cross the Passover lambs were being sacrificed in the temple. For those with ears to hear John is proclaiming through the details of his narrative that the prophetic witness of John the Baptist in the opening chapter of the Gospel has been fulfilled: “Here is the Lamb of God who takes away the sin of the world!” (John 1:29, see also 1:36).

A key element of the witness of the gospels

Stephen Chester is Lord and Lady Coggan Professor of New Testament at Wycliffe College. During the Winter 2020 semester, he will be teaching, "Who Is Jesus?"