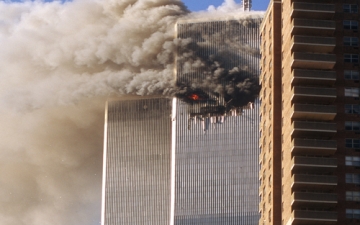 This week is Orientation Week at Wycliffe College. Monday, September 11 2017, will be the first day of classes in the Fall semester. It will be a day that will mark a poignant anniversary for Executive Administrator Karen Baker-Bigauskas, as she remembers her first September 11 here. She blogs about her memories, below.

I began working at Wycliffe College in May 2001. My first day of classes came on Tuesday, September 11th that same year.

It was a day I’ll likely never forget.

While putting together Morning Star, Wycliffe's David Durance came into my office and asked if I had heard about what was going on in New York. I quickly turned on my radio, checking for news on the Internet, but couldn’t find information fast enough. David had mentioned that students were gathering around the TVs on both the second floor and in the Day Students’ Lounge, so I headed to the second floor to see what I could learn.

As I walked through the door, the North Tower of the World Trade Centre fell. The room hushed. No one said anything; we all just stared at the TV in shock as the clouds of dust rose.

After a while, I made my way back to my office, and gradually got back to work, but that image of the falling tower wouldn’t leave my mind. It seemed that everyone walked around the College in a bit of a daze for the rest of the day. We gathered in the Chapel for impromptu prayers; we gathered in the Refectory and talked about what had happened. So much speculation, so many lives lost.

9/11 lives on in everyone’s memories, including mine.

When I got on the GO Train to head home, people who usually kept to themselves were talking to other passengers. It was a special trip home that night; I met someone who worked with a friend of mine who often travelled to New York for meetings at the World Trade Centre. The woman said that my friend had not been there that day, although others from their company had been. They still didn’t know the status of those other employees.

September 11 2001, lives on in my memory as a reminder of how people come together in times of crisis; conversations start, prayers are said, hugs are given all around.

As the names of those who lost their lives that day came to light, I learned of one person I had known; he was a father and husband to some pupils in ski classes I taught. Although I hadn’t known him well, many of my friends had, and we hurt and mourned together.

Tuesday, September 12th, 2001 was a crystal clear day. I remember walking up the steps from the Museum Subway Station on my way to Wycliffe College early that morning and seeing the Toronto skyline in all its glory. Never before had I felt such a sense of gratitude for the beauty of its unmarred horizon.