Of Pasta and Palimpsests: Notes on a Visit to Rome | Wycliffe College
Skip to main content

Of Pasta and Palimpsests: Notes on a Visit to Rome 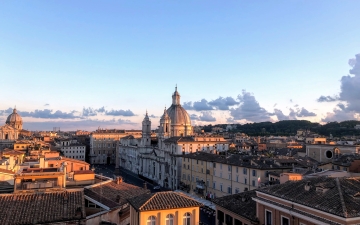 I recently had the opportunity of spending two weeks in Rome as part of a course on Anglican Ecclesiology and Ecumenism. The course, ably taught by Prof. Matthew Olver of Nashotah House seminary and Dr. Christopher Wells, director of the Living Church Institute, focused on the history and character of the Anglican Communion as well as the Anglican commitment to Christian unity. I was there in the role of tourist, pilgrim, and theologian-at-large. (I gave one lecture, on the scriptural roots of ecclesiology.) Most of those involved in the course were Anglicans, although we were also blessed with the presence of three smart PhD students from the University of Notre Dame, all of them liturgical scholars and Roman Catholics. The Anglican Centre in Rome provided us with gracious hospitality under the leadership of its Director, Archbishop Ian Ernst of Mauritius.

Rome as a palimpsest

A friend of mine who loves Rome described the city as a palimpsest: a manuscript that has been erased, written over, and re-used multiple times. We certainly saw that as we walked about the city. My favorite example of Rome’s palimpsest-like character was the Basilica of San Clemente, a twelfth-century church with a stunning mosaic depicting Jesus’ cross as the Tree of Life. In the modern period, Dominican archaeologists digging beneath San Clemente uncovered a fourth-century Christian house of worship. And digging down below that, they discovered the remains of a temple from the cult of Mithras, including a beautifully preserved Mithraic altar.

Experiences like this were to be repeated again and again throughout the trip. A tour of St. Peter’s Basilica under the guidance of Rome native Dr. Sara Magister, a queen among tour guides, included a trip to the underground excavations or scavi. Is St. Peter’s actually built on the site of the apostle’s tomb? Maybe; local guides will show you the exact spot. But there are certainly traces of an ancient cemetery adorned with Christian symbols. Rome seems the living proof of William Faulkner’s saying, “the past is never dead, it’s not even past.”

But for all of Rome’s historical and artistic grandeur, it was the top layer of the palimpsest that interested me the most. We were there, after all, to talk about the church: the present as well as past company of those who have believed the apostles’ message of Jesus crucified and risen. We were not only reading theological texts about the church, but in our own way actually being the church together. We read Scripture together, prayed together, and sang together (masks on; this was still in the middle of a pandemic). As Catholics and Anglicans, we could be present at each other’s Eucharist, even if we could not actually take the final step of receiving Communion. At moments like this, the sense of separation between divided Christians was palpable and painful.

Yet there were many signs of hope. I never thought I would attend an Anglican Eucharist, for instance, where the preacher of the Word was a Catholic Cardinal (Cardinal Grech of Malta, who told me he has visited the Maltese church in my part of Toronto). At the ecumenical vesper service,which we attended our final night, at the papal basilica of St. Paul’s Outside the Walls, Archbishop Ernst processed down the aisle side by side with Pope Francis. And on one memorable Sunday morning a group of us, both Anglican and Catholic, decided to be truly ecumenical and attend church twice: first at the Anglican church of St. Paul’s Within the Walls, then at the cathedral of St. John Lateran. After that exhausting morning of church-hopping, what else could we do but repair to a nearby restaurant for a lunch of anchovy pizza and red wine?

Just so; some of the best conversations we had on the trip were the ones conducted over restaurant tables. I’m sure there are bad meals to be had in Rome. I never saw one. It was at late-evening dinners over cacio e pepe or bucatini all’Amatriciana or Jewish-style artichokes (deep-fried and delicious) that we discussed the difficult problems of church, world, and Christian doctrine. One particular meal stands out in my memory. For reasons now obscure, talk turned to the question of the Beatific Vision. What will heaven be like? Will the saints see God “directly,” or will they see him through the mediation of Christ’s risen flesh? What did Aquinas have to say on the subject? What would Calvin say? etc. etc. This is not one of those theological questions that anyone’s salvation depends on. Rather the delight was sheerly in talking about God and the things of God, because God is infinitely true and beautiful and worth knowing. It was one of those rare experiences when a group of people are “in the zone”; we wondered what our fellow diners made of us.

A few days into the Rome course, I realized that it was precisely conversations like this that I’d been missing over the long two years of the pandemic. I missed lecturing in the physical classroom. I missed the buzz (sometimes more like a roar) in the Wycliffe refectory, and the casual conversations that would occur when I crossed paths with a student or colleague in the hallway on the way to class. I missed Wednesday Eucharist. Embodied encounter of this sort is, it seems to me, irreplaceable in the life of a school like ours. The lifting of pandemic restrictions gives me hope that we can re-commit ourselves to our mission of providing quality in-person theological formation in service of church and world. We need to add our own layers of writing to the church’s palimpsest.

For further reflections on the Rome course, including interviews with Professor Mangina and other participants, tune in to this recent episode of the Living Church podcast.  Joseph Mangina is Professor of Systematic Theology at Wycliffe College. If you enjoyed this blog post, you may also appreciate his reflection, "On Not Getting Anything Out of Sermons."