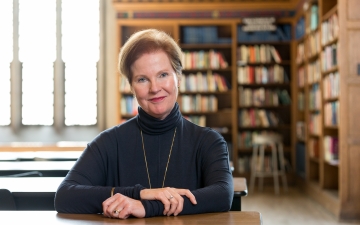 Sex and Sin have a long history together.

Being a scholar of the apostle Paul, I have purposely capitalized the word Sin. Paul understands Sin as both a power greater than our individual sins and as the reason for our individual sins. In Paul’s thought constellation, Sin targets everything good about God’s creation, including sexuality. Sin’s project is the destruction of God’s good gifts in order to divide people from each other and from themselves. The end goal of Sin’s game is to so distort humanity’s relationship with God’s gifts that we lose sight of God and forget the joy God desires for God’s creatures.

The recent exposure of the extent of sexual harassment, exploitation and abuse in previously esteemed Western subcultures – media, politics, academia, sports and the church – is an indication of Sin’s persuasive power.

Predators delude themselves into thinking that if no one finds out, it is somehow alright to violate another person’s sexual space. Or they think their social power privileges them; they have a right to grab what and who they want. Or they don’t think at all – they just obey their desires for sex or for sexual control, regardless of the wishes of their prey.

This is a classic example of Sin’s work. It targets what is good – sex – and spoils it. God’s beautiful gift of sex, meant for joy, for creativity, for mutual affirmation becomes instead a force of destruction. Sin uses sex in order to divide people from each other and themselves.

Having myself been preyed upon, I know the toxic effect of sexual harassment. I view the current #MeToo movement as a welcome moment unveiling the extent of sexual harassment and abuse – another instance of revealing Sin’s insidious work. It is also a moment of muted triumph – a further exposure of, and so weakening of, Sin.

I believe, as Paul did, that God’s work in Christ has disarmed Sin, and that those who know this are freed to work alongside others against Sin. Paul proclaims that Sin’s work is ultimately weak and that because of Christ’s cross and resurrection Sin is doomed. In Christ God has created a new place and way to live. God in Christ has created an environment in which people can “consider themselves dead to Sin and alive to God in Christ Jesus” (Rom 6:11).

This current moment, though it is disheartening because of the grimy stories we hear or remember, is also a moment of hope. Those who believe along with Paul, know that Sin cannot and will not win. It has power only if we choose to give it power.

This conviction liberates us to work alongside all humanity to actualize God’s new creation in Christ, where Sin’s impotence and ultimate destruction is revealed.