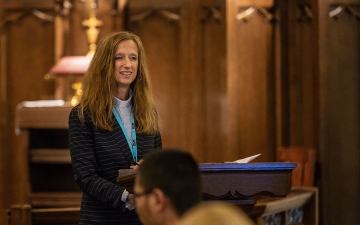 Can a woman preach? Can women lead worship? Does God ordain authority for women in the church? It is a question that matters to me, as a woman and a priest in the Anglican church, now for more than 25 years. Greek points us toward an answer!

Last week I read Genesis 1 with my Intermediate Greek Exegesis class. We read the creation story in the Septuagint, the ancient Greek translation (ca. 250 BC) of the Hebrew Scriptures—a translation written simultaneously, the legend goes, by seventy different men in seventy different rooms. (Septuagint, often written LXX, means “70.”) When they emerged, their seventy separate translations were identical, word for word. It was by the inspiration of the Holy Spirit, the Jewish people believed, that the LXX was written, and so it had great authority. It is the text most of the New Testament authors use when they quote the Scriptures.

In Greek class, reading LXX Genesis 1, we came to the creation of humankind. “And God made   τὸν ἄνθρωπον (ton anthrōpon)”, the biblical text says (Gen 1:27). Anthrōpos is the word Greek uses for the human being: not just “man” (though it can also mean “man”), but “humankind.” When Greek wants to specify “man” as in individual male, it uses a different word, ἀνήρ (anēr). God made, the biblical text says, “humankind.”

What comes next is interesting. Watch the pronouns: “in his own image,” the Greek Bible says, “he created him”—“him” is αὐτός (autos), the singular masculine pronoun, referring back to the singular masculine noun anthrōpos. And then it goes on: “Male and female he created them.” Now the pronoun is plural—but in the logic of the sentence it still refers back to anthrōpos. Humankind, God’s creation on the sixth day, is singular, one kind, one anthrōpos. And it is plural, male and female together. This is how humanity is constituted by the word of God.

Genesis goes on: “And God blessed them, saying, ‘Be fruitful and multiply and fill the earth’.” The verbs, all of them, are plural. Humankind as man and woman together is given the divine commission.

Then comes the clincher. “Fill the earth,” God says, “and have authority over it, and rule over the fish of the sea and the birds of the sky and all the animals and the whole earth” (1:28). Again, the command is plural. Authority—over all things on earth, the power to rule, government, leadership, is given to humankind, the man and the woman both. It is the same in 1:26: “let us make anthrōpos (singular)in our image and according to our likeness and let them (plural!) rule over the fish of the sea…and over all the earth.”)

This is how the whole Bible begins—and in the Hebrew, incidentally, it is the same.

The ancients understood this, the authority given to woman and to man. That is why the Old Testament is studded with famous women:

Tamar, who by her bold action carried on the line of Judah and so the divine promise of a sceptre for Judah’s descendants, when Judah himself had abandoned it.

Rahab, who confessed that God is Lord even though she was a Canaanite and a prostitute and a woman, saving the Israelite spies so that God’s people could enter the promised land. Judges quotes the story of Moses when Rahab speaks: in her, God is carrying out a deliverance like Moses’. The rabbis honour Rahab as a prophet.

Deborah, who rose to lead the Israelites in the time of the judges. She speaks with authority the word of the Lord, and Israel, even to the commander of the army, follows her word.

Ruth, who though a gentile cleaved to Naomi and to her God, and though a woman set out, like Tamar, to make sure that the Levirate law was fulfilled. By her bold faithfulness, Ruth was given a grandson and the line of David continued. The book of the birth of David’s ancestor is named, after all, not Boaz, but Ruth.

Perhaps that is why Matthew, on the first page of the New Testament, names Tamar and Rahab, Ruth and the wife of Uriah, in his genealogy of Jesus the Christ. The New Testament, like the Old Testament, hails the women who by their word and by their deed led Israel on to the kingdom God promised. It is all there in nuce on the Bible’s first page, because God made anthrōpos male and female in his image, and God saw that it was very good.

So I preach with joy and with hope, walking in the footsteps of Tamar and Miriam and Rahab and Deborah and Ruth and Mary Magdalene and the anointing woman and Priscilla and Euodia and Perpetua and so many others—so I preach with joy, because this authority is given to me in the Word of the Lord.