“I, Patrick, A Sinner” | Wycliffe College
Skip to main content 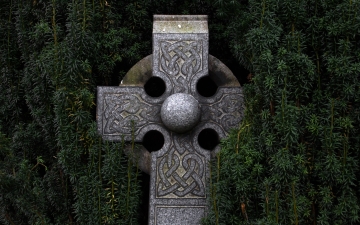 Happy St. Patrick’s Day! Who was St. Patrick, and what example does his life and mission have for us today? First, a few pertinent facts. We know that Patrick was born in the late fourth century in Roman Britain, the son of a deacon, and grandson of a priest. We glean most about him from his Confession (access it www.ccel.org), a work he wrote late in life. The Confession is not autobiography as we might consider the Confessions of St. Augustine (his near-contemporary) to be; rather Patrick’s is part apologetic, part testimony. It contains a confession of faith, an acknowledgement of sin, and praise of God. From it and from the details of his life, we can learn the following spiritual attributes worthy of note and emulation.

A victim of his age and a direct calling from God

While still a youth Patrick was captured by Irish pirates and brought to Ireland to work as a herdsman. It was during this lonely and isolated activity that, according to what he tells us in the Confession: “the Lord opened my mind to an awareness of my unbelief so that ... I might turn with my whole heart to the Lord my God.” A period of intense prayer followed, as in time did a vision from God instructing him to escape and make his way across the country where a ship brought him to freedom. Thereafter, it is said that he spent two years at the monastery of Lérins in France where he developed a sense of religious vocation, something that was confirmed when he returned to his family in Britain.

Back home, in time he had another vision in which he heard “the voice of the Irish” calling him. He interpreted this as God’s call to him to return to Ireland and preach the gospel there. By this time he was in his late twenties. He may not have responded to the call immediately, because of resistance from his family, because he had no training for missionary work, and because the idea of mission to pagans outside the Roman Empire was an alien concept at the time. So the circumstances were not auspicious, and overcoming them delayed the assumption of his missionary call. But eventually, he did respond and in time became a bishop. Through all this trial and testing of his call, it is evident from the Confession that Patrick placed his entire trust in God. He praises God and gives thanks for God’s leading that turned him into an instrument for the conversion of a pagan land. It could not be other than a work of God, for Patrick brought the faith to those whom he had once served as a slave. He was to spend the rest of his life in Ireland in obedience to the call of Christ on his life.

There were other missionaries in Ireland before Patrick, but he is likely to have ministered to pagans rather than existing Christian communities. He had an itinerant ministry, travelling around the country gaining converts. He relied largely on preaching and teaching. The Confession recounts that he baptized “many thousands” and ordained clergy “all over the place.” Following on Patrick’s pioneering efforts, other missionaries are likely to have followed.

His humility and obedience were demonstrated by his willingness to exchange his free status as a Roman citizen, to serve God in a hostile country. The Confession reveals that Patrick, right through his life, had a sense of his own inadequacy. The opening words to the work are: “I, Patrick, a sinner, the simplest of countrymen, the lowest of all the faithful and utterly contemptible to a great many.” He acknowledged his lack of learning but declared that it was God who had raised him up and called him to his task and that he had no motive for returning to Ireland except to preach the gospel there. The Confession includes a frank confession of his worldly and sinful youth.

Though Patrick’s lack of learning was a drawback, this was more than compensated for by the scriptural foundation of the work. The Confession is infused with biblical allusions, especially the epistles of Paul. Patrick was not a theologian of any stature, but he proclaimed the divinity of Christ, the doctrine of the Trinity, the sinfulness of humanity, and the need for divine grace. All these were orthodox attributes at a time when many in the British church were dabbling in Pelagianism.

Patrick was inspired by Paul’s epistles. He saw his calling to preach the gospel to the pagans in very similar terms to that of the apostle to the gentiles. He saw himself as being in similar circumstances as Paul; for example, he was taken captive many times, and he had to face criticisms that recall those directed against Paul at the hands of the Corinthians.

The way he conducted his mission was just as much a manifestation of God’s grace and directed by God’s will as was his own vocation. He had to justify his Irish mission before his critics in Britain, but he did so on the basis that whatever he achieved was not due to his own work but to the action of divine grace.

In a ministry of over thirty years, Patrick converted thousands of pagans to Christianity. While one might not subscribe to the outlandish claims of the book by Thomas Cahill, How the Irish Saved Civilization, it is clear that a flowering of Christian culture arose in Ireland, that it became an outpost of civilization in the midst of continental barbarism, and that in time it became the centre from which missionaries went out to re-evangelize Britain and Europe.

Patrick’s attributes of humility, acceptance of the will of God for his life, ultimate trust in God in all his dealings, awareness of his own sinfulness, a true missionary spirit, an abiding sense of being the recipient of God’s grace, cognizance of the “thorn in the flesh” manifested in the criticisms of his superiors, are all instructive for the Christian disciple.

So let us raise a glass to the real St. Patrick, for being the greatest of the missionaries produced by the Church in the years when the Roman world was disintegrating. By his work carried out on the fringe of the known world, he was to preserve the light of faith against the darkness of the barbarian West. His model of mission has much to commend it for our own particular “dark ages.” Beir bua agus beannacht!