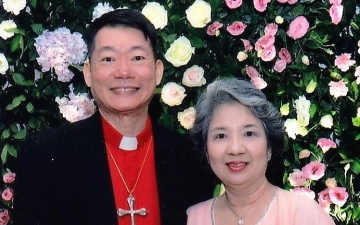 “[Wycliffe] College has balanced change with tradition, the building itself reminding faculty, trustees and students alike that they did not start Wycliffe, that each new generation stands on the shoulders of all who have been there before, that to become part of the College is to be received into a historic community, not to form it anew.” – Reginald Stackhouse in The Way Forward: A History of Wycliffe College, Toronto, 1877–2002

Stackhouse’s words serve as a reminder and a challenge to remember those who have gone before. In that spirit, we would like to introduce The Very Reverend Doctor Patrick Tanhuanco (Wycliffe College Class of ‘78).

It has been more than 40 years since Patrick strode across the platform in Wycliffe’s Sheraton Hall to receive his MDiv. He would be the first to say that God has been gracious in the intervening decades: he and his wife, May Yuchenkang, will soon celebrate their 35th wedding anniversary; they are parents and grandparents; and his years of ministry have been rich and fruitful. At 65, he resides in Manila—the “Pearl of the Orient” and capital city of the Philippines—where he serves as supply priest for St. Stephen’s Parish and Canon to the [Episcopal] Bishop on Chinese Affairs.

We caught up with Patrick (“PT” below) by email to learn a little about the impact that his Wycliffe education had on his life.

PT:          When our Lord Jesus Christ called me to full time pastoral ministry, I responded “Yes, Lord!” Our retired parish rector at the time, The Reverend Hsi Jen Wei, had studied at Wycliffe, taking Master of Theology courses in 1932, and he introduced me to the College. I prayed to the Lord, applied, and studied.

PT:          It was a time of personal growth—spiritually, academically, socially—of being strengthened in the faith of our Lord Jesus Christ and of being prepared to serve in His ministry.

Q:           How did your Wycliffe education prepare you for the life of ministry that followed?

PT:          Wycliffe prepared me by deepening my understanding and practice of my faith: through research related to ministry and other subjects; in conducting worship, preaching, and pastoral care; through the acquisition of cross cultural understanding and ministry experience; and finally, through gaining skills for practical living.

PT:          Since graduating from Wycliffe I ministered at St. Stephen’s Parish, Manila until 2008. I started in a junior pastoral position, but eventually advanced to the senior position of Rector. I was ordained a Deacon in 1981 and a priest in 1983. Concurrent to that ministry, I held adjunct faculty positions in two theological seminaries, worked as chaplain of a school, and held board of trustee positions in several seminaries, Christian missions, and institutions. Then the Lord called me to be the President (Principal) and Dean of St. Andrew’s Theological Seminary, which is the only Anglican–Episcopal Seminary in our Anglican Province of the Philippines. I served there from 2008 to 2014.

Along the way I earned a Doctor of Ministry from Denver Seminary (Denver, Colorado).

Internationally, I served for three years as a member of the steering group for Theological Education in the Anglican Communion 2 (TEAC 2) in London, England, and for six years as a council member for the Council of Episcopal Seminary Deans, Theological Seminaries of the Episcopal Church, in New York.

PT:          Read the Bible systematically, from Genesis to Revelation, at least once a year (15 minutes a day, four chapters a day should do it!) This is for your personal profit and will draw you closer to our Lord God, first as a student and later as a minister of the Gospel. Trust fully in our Lord Jesus Christ, now and always, because doing so will make for a fruitful life and ministry. Amen!