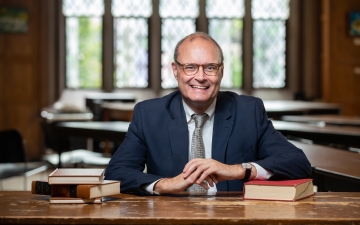 The struggle for justice seems never to be won, and it is easy for those who fight for it to become weary.

As I write this blog, news reports are focussed on the missiles that are falling on Kyiv, and on the world’s inability to effectively address our climate crisis. I hear shock and dismay expressed that these things are happening in the 2020s. Ought not humanity to have advanced beyond this by now?

In pondering this question, there is something about Martin Luther’s view on holiness in the Christian life that grips me. For, unlike many other theologians in many Christian traditions, Luther does not think of the Christian life in terms of steady progress—from the point of conversion forwards—into greater and greater holiness. Instead, what Luther says about holiness takes its cue from his conviction that faith is a divine gift that unites the believer with Christ. When this faith is expressed in human actions, those actions are genuinely those of the believer, but the believer only exists in union with Christ. If those who believe live out of their faith, then because Christ is present in faith, they will also live out of who Christ is. The crucial question for Luther, therefore, is less who the Christian becomes than whether the Christian will daily appropriate the presence of Christ in justifying faith.

Luther believed that it is possible to learn to trust Christ more and more and so to make progress, but such progress in faith does not cohere into a stable internal quality of the Christian’s own. To have trusted God today and to have lived the life of Christ still leaves open the question of what will be the case tomorrow. The human propensity to turn away from Christ and live from the self remains. Thus, Luther conceives the Christian life as a continuous struggle between two modes of existence.

In the light of this, while the events filling today’s headlines are tragic, and they are depraved, they should not be shocking or surprising. The expectation that new generations will be less sinful than previous ones completely ignores what Scripture tells us about our fallen human condition. Yes, we are called to participate in what God is doing and to struggle for justice, but Luther reminds us that until Christ returns the victories won will always be snatched out of the face of the sadness, terror, sin and death that are an inescapable part of the human condition. We will not in this life ever be able to leave behind the battle.

The crucial question on the spiritual battlefield

The crucial question on the spiritual battlefield is whether the Christian will live by faith each day and hence in Christ and hence as righteous. The struggle to live righteously depends upon this daily appropriation of Christ’s alien righteousness. Victory requires the believer constantly to take hold of Christ in faith anew. It is to this that Luther alludes in his famous description of the believer as simultaneously justified and a sinner. He does not mean that believers are unable to grow in holiness, their sins forgiven, but their behaviour unchanged. Rather, he means that on the one side those who believe have Christ living in them and therefore the possibility of holiness, but on the other side the possibility of returning to reliance on the old self and hence to sin. They may be able to live out of Christ more and more, but they will not in this life be lifted out of the battle.

I do not think that this way of understanding what the New Testament says about the struggle of the Christian life is the only possible faithful interpretation of key texts. The question of the identity of the self in Christ is a complex one. Yet, I do find Luther’s perspective compelling. I find it difficult to interpret my own Christian journey as a steady growth in holiness. The struggle that Luther describes, with the possibility of alternating victories and defeats, seems more like my own experience. Yet I also think that Luther’s approach has a wider relevance to our own times. This can be seen in Luther’s comments on Galatians 5:17, where Paul speaks of the struggle between the Spirit and the flesh. Luther comments that even if the flesh temporarily gains the upper hand this can be productive if the experience drives the believer back to reliance on Christ:

For when his flesh impels him to sin, he is aroused and incited to seek forgiveness of sins through Christ and to embrace the righteousness of faith, which he would otherwise not have regarded as so important or yearned for with such intensity … Through such an opportunity a Christian becomes a skilful artisan and a wonderful creator, who can make joy out of sadness, comfort out of terror, righteousness out of sin, and life out of death, when he restrains his flesh for this purpose, brings it into submission, and subjects it to the Spirit.[1]

This quotation speaks to our contemporary situation in important ways. For several decades now the critique of traditional evangelicalism has been that it is too focused on the salvation of the individual. The forgiveness of sins matters and eternal destiny matters, but they must be placed within a wider framework. In Christ’s victory over sin and death, God is making all things new and reclaiming God’s lordship over all creation. We are called to participate in this victorious establishment of God’s kingdom and therefore a concern for social justice must lie at the heart of our Christian faith if it is to be authentic. Genuine discipleship demands that we choose the side of the oppressed.

I regard this critique of traditional evangelicalism to be essentially correct but itself to have significant weaknesses which Luther’s quotation can help us to discern. Luther’s own legacy in relation to social engagement is decidedly mixed. In contrast to his enormous courage in standing up to corrupt authority even when his life was threatened, Luther’s call for violent repression in response to the Peasant’s Revolt and the vile anti-semitic statements of his later years stain his record of discipleship. And down the centuries his controversial doctrine of two kingdoms has sometimes been interpreted as a warrant for political quietism.[2] Nevertheless, Luther’s evaluation of the battle between the Spirit and the flesh is relevant for our commitment to social justice in another kind of way entirely. For his description of how it is that Christians can be skilled artisans and wonderful creators reminds us of the personal spiritual discipline involved: the restraining of the flesh and its subjecting to the Spirit.

The church is often criticized for failing in its vocation to work for God’s kingdom and many Christians are deeply disappointed in their brothers and sisters. Sometimes this disappointment is entirely valid, but there is also another issue. It is that the failures of the church are always someone else’s fault. We forget that one of the places in which God’s lordship needs to be established is our own lives.

The battle lines of justice

The battle lines of justice are not only outside us in the world so that we can simply join the side of right. The battle lines of justice also run through the centre of our lives so that sometimes it is we who have landed on the wrong side. Over the years I have been involved in some Christian communities that struggled severely because of division. Always people felt hurt but could not understand that they had also hurt others. Always people seemed to love their hurt more than they loved the church. Always those who regarded themselves as the most socially enlightened were as big a part of the problem as everyone else, if not more so because they were so convinced of their own rightness. Luther reminds us that we are only able to be skilful artisans and wonderful creators who bring joy out of sadness, comfort out of terror, etc. when we fight the battle within ourselves and subject the flesh to the Spirit.

And yet, for all that Luther’s expectations are realistic, I do not see them as pessimistic. Joy out of sadness, comfort out of terror, righteousness out of sin, and life out of death are not small expectations. He is speaking of the truth of the gospel becoming embodied in the lives of individuals and in the community of the church. Luther tells us that if we trust Christ and live out of who he is instead of ourselves then we will be able to subvert and turn back evil. May God help us to see day by day where and how we are being given opportunities to do just that.

Stephen Chester is Lord and Lady Coggan Professor of New Testament at Wycliffe College. If you enjoyed this piece you may also appreciate his blog post, "Abba, Father!" on trusting God in the midst of anxious times.