To be close to Christ’s death: the knowledge of love | Wycliffe College
Skip to main content

To be close to Christ’s death: the knowledge of love 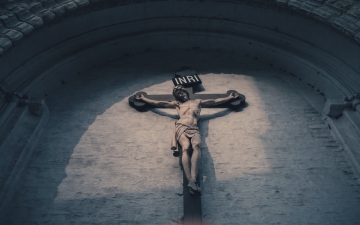 Perhaps I shouldn’t admit this publicly, but I don’t understand why Christ died. I am confident that I know the reason for it: sin’s hold on humanity. But, how Christ’s death changed that—about that, I am not so sure. This admission may be especially awkward given that I have spent my adult life studying the New Testament writer whose words have been the foundation for some of the most influential theories of what is often referred to as the atonement.

Yet, though I have spent years studying the Apostle Paul, I cannot claim to know intellectually how God’s sending God’s son into God’s world and allowing him to be tortured and executed defeated the power of sin and sin’s partner, death. And yet, I believe along with Paul that that action mended what was drastically broken—the circle of love between humanity and God.

Why this lack of understanding? In addition to my limited capacities, it may be because Paul himself doesn’t articulate a full-blown rationale. He certainly gives the theologians who come after him potent suggestions for why Jesus died and what that death did for God’s world. Romans 3:21-26 is perhaps the chief Pauline passage on which one of the more famous theories (known as substitutionary atonement) rests. I suggest, though, that it is from other passages—in places where Paul bears his soul—that we come to know the primary understanding Paul has of Christ’s death.

An understanding known only to love

As I read the apostle, Paul doesn’t so much explain as emote in regard to Christ’s death. One of the clearest examples of this is Paul’s exquisite and evocative words in Philippians 3:3-11, written when he was imprisoned and suffering under heavy chains. Here Paul offers a glimpse into the character of his understanding of Christ’s death. Paul in chains makes plain that his primary and overriding desire is not that someone would come and cut his chains, or pronounce him innocent and give him a good meal.  Paul’s most profound desire is entirely Christ. And the desire Paul exposes isn’t just for the happy ending part of loving Christ—for the resurrection. He desires that his whole life be shaped by Christ’s death. He wants a closeness to Christ’s death that is beyond articulable knowledge. Paul wants a kind of understanding that is known only to love.

It is a strange idea; the power of the resurrection shaped by the form of Christ’s death. In addition to the fact that Paul more than anyone understood that Christ’s cross is of a piece with Christ’s resurrection, that the risen Christ is also the crucified Christ, I think Paul wanted to live in the condition of being conformed to Christ’s death because he loved Christ. Paul’s love for Christ is entire. He wants to share in all of Christ’s actions and experiences, particularly in the one that cost Christ the most.

Understanding that goes to the heart of love

Paul expresses an understanding of Christ’s death which transcends the cognitive; and which goes to the heart of love. Paul wanted his life to be lived in the form of Christ’s death because of how much Paul loved the one whom he knew loved him and gave himself for him. And so, as Paul says in Galatians, his life is no longer his life. He has been co-crucified with Christ (Galatians 2:20). Paul is entirely Christ’s, and Paul focuses his union with Christ on Christ’s death.

It is no surprise that when Paul recounts the words that the Lord (presumably the risen Lord) gave him, which have become the church’s words at eucharistic services, he concludes with this direction, “as often as you eat this bread and drink this cup, you proclaim the Lord’s death until he comes” (1 Corinthians 11:26). The ritual Paul offers the church is a pastoral, tangible way to understand Christ’s death in the manner that he himself does.

Paul offers a model of understanding Christ’s death that works in a place beyond our active minds. Paul certainly believed and articulated that Christ’s death defeated sin and death and reconnected humanity to God. Most of all, though, Paul understood that to know the why and how of Christ’s death could only take place in love’s location.

As we walk towards Jesus’ cross this week and then celebrate his resurrection, perhaps the example of Paul’s extraordinary love for Christ may draw each of us deeper into the heart of victorious love.

Ann Jervis is Professor of New Testament at Wycliffe College.