On being a shepherd | Wycliffe College
Skip to main content

On being a shepherd 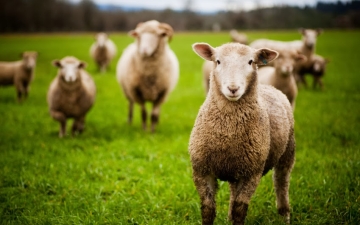 The following blog originated as part of a sermon preached by Wycliffe’s Professor of Pastoral Theology Marilyn Draper during an ordination service.

We hear a lot about “shepherd leadership” in the church these days. As we approach the end of the semester – a time when many students are looking ahead to leaving their seminary studies behind in order to head into full-time ministry, it seems a good opportunity to share Marilyn’s musings on what it means to be a shepherd of God’s people.

In the Old Testament, God is described as the shepherd of his people. In the New Testament, Jesus reveals himself as the good shepherd who gives his life on behalf of the sheep. The role of the pastor is that of an under-shepherd, someone who serves the church under God’s guidance.

We read about the pastor as a shepherd in 1 Peter 5: 1-4: “So as your fellow elder and a witness of Christ’s sufferings and as one who shares in the glory that will be revealed, I urge the elders among you:  Give a shepherd’s care to God’s flock among you, exercising oversight not merely as a duty but willingly under God’s direction, not for shameful profit but eagerly.  And do not lord it over those entrusted to you, but be examples to the flock. Then when the Chief Shepherd appears, you will receive the crown of glory that never fades away.”

Many of us in the church have a rather idyllic and romantic notion of shepherds. We imagine shepherds sitting in the sun on rolling green hillsides, watching over their flocks. Life is quiet, serene, beautiful, and perhaps even easy.

But the life of a shepherd involves so much more. Shepherds are engineers repairing machinery to care for sheep in all kinds of weather – thunderstorms and blizzards.

Shepherds are administrators and CFOs providing adequate food – safe pastures with good fences in summer, grain and hay for the rest of the year. Shepherds are medical practitioners, applying medicine, trimming hooves, and providing the annual shearing.

Shepherds are also midwives. During lambing, shepherds practically live in the barn to ensure that the ewes, the mother sheep, deliver safely so that the newborn lambs are warm and dry and receive nourishment. Further, they carefully research in order to purchase new rams and ewes to add vitality and growth to the flock.

Finally, shepherds are defenders. Did you know that sheep can die of fright? They are the only animal that has no means of self-protection – they cannot hit or kick to fight off an enemy, and they cannot run quickly enough to outrun predators. They can easily be attacked by bears, wolves, cougars, and coyotes. Thus, the shepherd needs to remain diligent and alert for potential threats.

Fortunately, joy is also part of being a shepherd - laughing with delight as the young lambs leap for joy, and play games of tag. The shepherd personally interacts with the sheep – some become dear pets. The shepherd creates the environment in which the sheep thrive – so that the sheep produce wool, eat, grow, get along with one another in the flock, and multiply.

The key part of being a shepherd is the relationship that exists between the shepherd and sheep.  Large sheep enterprises now exist as part of the agricultural system in many areas of the world. However, in Canada, most flocks remain small, enabling the shepherd to know the needs and even the personalities of the sheep.

Re-interpreting the romantic picture of shepherding provides insight and builds understanding as we think about the role that clergy care and church leadership play in a congregation. While enabling us to see the biblical picture of the shepherd more clearly, a thoughtful look at shepherding also reminds us of God’s intimate concern for the church. As under-shepherds, we have the privilege of participating in God’s creative care for his growing flock.

Did you know that watching sheep being herded can be a beautiful thing? Check out this drone video, shot on a farm in New Zealand, showing 3,500 sheep being mustered by working dogs. Turn up the volume and enjoy.