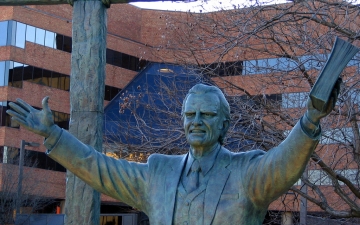 We knew it would happen one day, that a headline would appear announcing “The Death of Billy Graham.” But the fact that we knew it would come makes the event no less sad. It is the end of an era. Billy Graham defined evangelism, and indeed much of evangelicalism, for the second half of the twentieth century.

His preaching was heard by more people than anyone else in history. He was a pioneer in making use of media to spread the Gospel. He was friend and confidante to successive American presidents. He was also seen as a person of great integrity, in an age when many other public figures, some of them also evangelists, became enmeshed in scandal.

But Graham was not just an evangelist. In 1956, he founded Christianity Today, still today a broad and thoughtful evangelical voice. He built bridges between Christians of different stripes, a legacy that continues today in the Lausanne Movement. A Christianity Today tribute quotes J. I. Packer: "Up to 1940, it was every institution for itself. ... Increasingly, from the 1950s onward, evangelicals came together behind Billy Graham and the things he stood for and was committed to."

Anglican evangelicals might not always have agreed with Billy Graham’s theology or ecclesiology or methodology, but that should not blind us to the areas where we have much to learn from him, particularly his passion to communicate the Gospel to those outside the church. Anglicans who have shared that fire since (let’s say) the Second World War are few and far between: Sam Shoemaker, John Stott, David Watson, and Michael Green are on a very short list.

Martin Marty once said that if there were a Mount Rushmore of American religious history, it would feature Jonathan Edwards, Martin Luther King . . . and Billy Graham. We shall not see his like again.