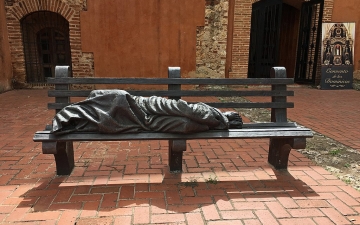 The United Nations has declared today, Wednesday, October 17th, as the International Day for the Eradication of Poverty. Professor of Pastoral Theology, David Kupp, blogs on this timely subject below.

October 17th is International Day for the Eradication of Poverty.  If Canadians were under the scrutiny of ancient Hebrew and Christian prophetic voices, would you and I pass their poverty tests?

Do not deprive the resident alien or the fatherless of justice, or take the cloak of a widow as a pledge. (Deuteronomy 24:17).

The same law applies to the indigenous and to the settler living among you. (Exodus 12:49 – my translation).

Speak out for those who cannot speak, for the rights of all the destitute.

Speak out, judge righteously, defend the rights of the poor and needy.  (Proverbs 31:8-9)

Learn to do good; seek justice, rescue the oppressed, defend the orphan, plead for the widow.  (Isaiah 1:17)

Contribute to the needs of the saints; extend hospitality to strangers. (Romans 12:13)

Citizens for Public Justice reports that at least 850,000 Canadians are visiting food banks every month.  One in eight families struggles to put nutritionally adequate food on the table every day.  Our national data tells us that more than 16 per cent of the population lives in poverty.  That’s 5.8 million Canadians.

We live with a growing imbalance between the rich and poor in Canada.  That gap has not been so wide for decades.  The gap is not simply about money, but includes health, housing, child well-being and food security.  Whether caused by broken families, systems, cultures or individuals, Canadian poverty and faith groups seem overdue for a moment of reckoning with decision makers in every dimension: neighbourhood, municipal, provincial and federal.  At minimum, the thousands of references in Jewish and Christian scriptures to the poor, the wealthy, widows, orphans and the oppressed, demand of faith groups a renewed intensity to our conversations, plans and actions.

Sustainable Development Goal #1 and its seven Targets may be imperfect and audacious, but offer a pathway: “End poverty in all its forms everywhere by 2030.”  Some Canadian churches and faith groups have been on the frontlines here for decades.  Band-Aids abound, and are essential: our food banks, shelters, street missions and support programs have more than enough work.  But the long-term death-blow to poverty in Canada must include meaningful, prophetic engagement with broken histories and faltering systems.

I weary of the “we can’t afford it” chorus – defeating poverty is not a question of “when we have enough,” but fundamentally a question of choosing priorities.  UNICEF now rates Canada 26th out of 35 wealthy countries for overall child inequality.  How exactly do Canadian adherents to Holy Scriptures sleep well with millions of precariously-housed children, with 4 million food-insecure Canadians, the boil water orders?  The headwinds of political change may feel stiff these days, but faith communities do not need to agree on every detail of the path forward to poverty eradication in Canada. Inaction is not a viable option in my Book.  Neither is it biblical. Prophets, arise.