Christmas Reflections: A Strange Way to Save the World | Wycliffe College
Skip to main content

Christmas Reflections: A Strange Way to Save the World 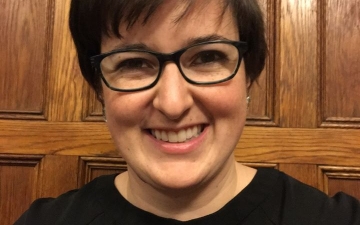 Ruth Bartlett is the 2018-2019 Senior Student. She is in the MTSD and the MDiv combined-degree program.  She hopes to be ordained with the Canadian Baptists of Ontario and Quebec.

The Birth of Jesus
In those days a decree went out from Emperor Augustus that all the world should be registered. 2 This was the first registration and was taken while Quirinius was governor of Syria. 3 All went to their own towns to be registered. 4 Joseph also went from the town of Nazareth in Galilee to Judea, to the city of David called Bethlehem, because he was descended from the house and family of David. 5 He went to be registered with Mary, to whom he was engaged and who was expecting a child. 6 While they were there, the time came for her to deliver her child. 7 And she gave birth to her firstborn son and wrapped him in bands of cloth, and laid him in a manger, because there was no place for them in the inn.

The Shepherds and the Angels
8 In that region there were shepherds living in the fields, keeping watch over their flock by night. 9 Then an angel of the Lord stood before them, and the glory of the Lord shone around them, and they were terrified. 10 But the angel said to them, “Do not be afraid; for see—I am bringing you good news of great joy for all the people: 11 to you is born this day in the city of David a Savior, who is the Messiah,[a] the Lord. 12 This will be a sign for you: you will find a child wrapped in bands of cloth and lying in a manger.” 13 And suddenly there was with the angel a multitude of the heavenly host,[b] praising God and saying,

14 “Glory to God in the highest heaven,
and on earth peace among those whom he favors!”[c]

15 When the angels had left them and gone into heaven, the shepherds said to one another, “Let us go now to Bethlehem and see this thing that has taken place, which the Lord has made known to us.” 16 So they went with haste and found Mary and Joseph, and the child lying in the manger. 17 When they saw this, they made known what had been told them about this child; 18 and all who heard it were amazed at what the shepherds told them. 19 But Mary treasured all these words and pondered them in her heart. 20 The shepherds returned, glorifying and praising God for all they had heard and seen, as it had been told them.

A Strange Way to Save the World

This Advent season, I have been reminded many times over of what Jesus’ parents were thinking as they anticipated His arrival. From pregnant friends to raps, Christmas pageants, to of course, the song “Mary Did You Know?”, I have been consistently wondering what exactly was going through Mary and Joseph’s minds preparing for Jesus, and how surprised they must have been with everything that took place!

The song that I often think of first when mulling over Mary and Joseph’s perspectives has a chorus that echoes questions that the songwriter assumes must have been floating through Joseph’s mind:

Why me? I'm just a simple man of trade.
Why Him? With all the rulers in the world.
Why here? inside this stable filled with hay.
Why her? she's just an ordinary girl.
Now I'm not one to second guess,
What angels have to say…

But this is such a strange way to save the world *

Mary and Joseph would never have imagined the journey to Bethlehem they would have to take, the stable where Jesus would born, the fact that lowly shepherds would be the first to hear of Jesus’ birth.

As the shepherds stood making “known what had been told them about this child”, I have no doubt these questions, and many more were swirling around Joseph and Mary’s heads. No one could have thought up the series of events that led to the birth of the Messiah, God here with us. What a strange way to save the world.

* Note: “A Strange Way to Save the World” was written by David Allen Clark, Donald A. Koch and Mark R. Harris

Lord, You chose such a strange way to save the world.  Thank you for Joseph and Mary’s obedience in the midst of confusion and questions. We could not have dreamt this up! You came as a human baby - God with us – and we are so grateful! Thank you! Amen.