The Difference between Truth and Opinion 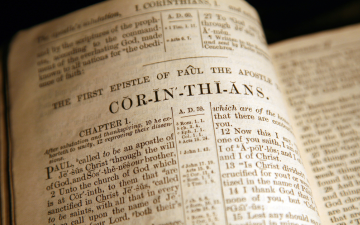 “One must not argue about opinions. A truth is a concentrated and serious procedure which must never come into competition with established opinions.” Alain Badiou, St Paul: The Foundation of Universalism (Stanford: Stanford University Press, 2003), 15.

Sometimes incidents that are not very important in themselves can crystallize for us the importance of issues that are much more significant. That happened for me many years ago as a student at a campus mission event in Britain.

Although the mission was supported by all the different university Christian groups, whatever their theological perspective, the speaker, a bishop, chose to attack “conservative” Christianity with its requirements for defined patterns of belief and conduct. It is as absurd, he argued, as insisting that customers in a restaurant have to be committed to eating their way through every item on the menu. I liked the illustration, but not in the way the bishop intended. I knew that faith and discipleship are not like consumer choices. Ever since I have thought of myself as the kind of Christian who tries to eat everything on the menu.

Of course, age and experience have taught me that this is much easier said than done. Time and again, I too turn out to prefer consumer discipleship. It is all too easy to be committed to the authority of Scripture and the truth of the creeds in principle, but then actually to be very selective about which parts of the truth we heed. In an age of polarization between “progressives” and “conservatives” both within the church and society, it is easy for our thinking about issues to be determined less by Scripture and more by what our tribal identifications tell us to prioritize.

The challenge is to hear clearly the priorities of Scripture.

St Paul can help us here, for, perhaps unsurprisingly for a 2000-year-old apostle, he is usefully unbounded by our cultural codes. On some occasions he is unhesitatingly intransigent, refusing to brook any compromise, on others he urges setting aside personal preferences for the sake of brothers and sisters who have a different perspective.

These striking differences in the way Paul approaches issues are the outworking of his profound sense of the distinction between the truth of the gospel and opinion.

We can see Paul discerning in this way when he confronts divisions in the Corinthian church. In 1 Cor 1:10 Paul appeals to the Corinthians to be united in the same mind and the same judgment. Clearly, he does not intend a blanket uniformity on all issues. When he comes to the issue of marriage, Paul distinguishes very clearly between his opinion (which is that those who are unmarried do better to remain as they are) and his acknowledgement that those who choose the path of marriage are nevertheless not sinning and can even be said to be doing well (1 Cor 7:38). In relation to food sacrificed to idols (1 Cor 8-10), Paul is unyielding in asserting the principle that the worship of other gods is sinful (1 Cor 10) but in contexts where one might be unsure about the provenance of food, such as at the meat market or in the home of a friend, he feels that the believer is under no obligation to ask questions (1 Cor 10:23–11:1). Others in the early church may well have considered this position lax. When it comes to the exercise of the gifts of the Spirit in worship, Paul’s concern is clearly to secure unity on the basis of diversity. The different members of the body are all necessary (1 Cor 12:12–26) precisely because they are different from each other and have been given different gifts by the Spirit.

Yet, if Paul does not mean by the same mind and same judgment a blanket uniformity, neither is he speaking about treating all perspectives on all issues as equally valid.

In no way, shape, or form, does Paul allow for a variety of valid perspectives on issues of sexual immorality such as that of the brother who is in a relationship with his father’s wife (1 Cor 5:1–11), or on that of visits to prostitutes by men in the Corinthian church (1 Cor 6:12–20). Nor are the issues of lawsuits between believers (1 Cor 6:1–11), or divisions at the Lord’s Supper (1 Cor 11:17–34), ones on which Paul sees any room for diverse viewpoints.

Paul distinguishes between truth, which is of God and is a matter of the gospel, and opinion, where there can be legitimate diversity of perspective but where the principal concern of believers in shaping their practice should be to build up the community and to strengthen its witness. When Paul calls on them to be united in the same mind and the same judgment, he is asking neither for uniformity nor for equal regard for all perspectives, but for the Corinthians to follow him in a Spirit-empowered discernment between gospel and opinion.

Throughout the letter, Paul urges the Corinthians to allow their life as a community to be shaped by what God has done in Christ’s death and resurrection.

For example, to allow differences in social status to be on display in the celebration of the Lord’s Supper so that those who have nothing are humiliated (1 Cor 11:23) is clearly wrong because, as Paul has already explained, in the cross “God chose what is low and despised in the world, even things that are not, to bring to nothing things that are, so that no human being might boast in the presence of God” (1 Cor 1:28–29).

Or in the matter of visiting prostitutes, Paul begins his explanation of why it is wrong by reminding the Corinthians of the destiny of the bodies of believers: “God raised the Lord and will also raise us up by his power” (1 Cor 6:14). In a class on 1 Corinthians students commented several times that they rarely hear issues addressed in the life of the church in this kind of way. Rarely do they hear teaching that urges patterns of behavior because they conform to the truth of the cross or the truth of the resurrection. By contrast, Paul does it frequently, and this is the way that he distinguishes between truth and opinion.

I suspect many readers will broadly agree with me but feel that all I have done is to lay bare the nature of the problem. For our entire difficulty is that we are unable to tell the difference between behavior that is mandated by the truth of the gospel and that which is more properly a matter of opinion.

Our whole problem in the contemporary church is that we struggle to discern in this way.

However, I suspect that Paul would be quite robust with us. At 1 Cor 2:16, he asks, "For who has known the mind of the Lord so as to instruct him? But we have the mind of Christ.” Paul would agree with us that in and of ourselves the task of discerning between truth and opinion is one beyond the power of human beings, but he would also insist that we are slighting the work of the Holy Spirit if we do not admit that, in Christ, we have been given the resources we need for the task.

I suspect he would ask us, as he implicitly asks the Corinthians again and again, whether the real problem is less that we are unable to undertake such discernment, but rather that we are uncomfortable with where it will lead us and the ways that it will unsettle and challenge our behaviors, attitudes, and values.