Does the Church Need Clergy? 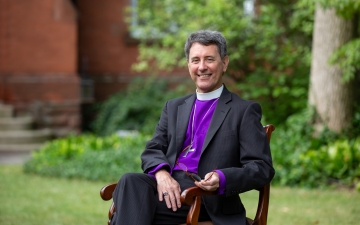 We are in a season of ordinations. In January, we witnessed the ordinations of Logan Hurst, Alison Hari-Singh and Alexandra Pohlod, to mention three Wycliffe students. And soon Philip Gearing and Orvin Lao will present themselves to the bishop for the laying on of hands. There are more to come. We are expecting as many as seventeen MDiv graduates to cross the convocation stage in May. This season especially Wycliffe becomes a proud alma mater!

But with ordination comes the question, “Is there really a difference between clergy and laity?”

There is a difference—at least in the popular mind

I think everybody would agree that, at least in the popular mind, there is a difference. People have a different set of expectations when it comes to clergy. When I wear a clerical collar, people treat me differently. Cashiers are friendlier, hospital patients are quicker to confide in me, shop keepers are occasionally more generous, and customs agents are now and again more suspicious. I get blamed or praised for the weather.

Am I somehow special by virtue of my office in the Church? We ought to recall that the word “clergy” is derived from the Greek word klēros, meaning God’s “lot” or “heritage”; and that the word “laity” is taken from the common Greek word laos, meaning “people” or “the people of God.” Now, the interesting thing is that in the New Testament these words are not contrasted in the way that we oppose them today. All Christians constitute God’s “share” or klēros. St Paul says to the Colossians that God enabled them “to partake in the inheritance (klēros) of the saints in the light” (1.12). We are all “clergy” in the sense that we are all God’s possession, and we receive the inheritance he has bestowed on those who live in faith. At the same time, all Christians are part of God’s laos. If an example is required, read 1 Peter 2.9: “But you are a chosen race, a royal priesthood, a holy nation, God’s own people (laos).” All ordained clergy, therefore, properly belong among the laity, for they are laity as members of God’s chosen people.

We need to be careful

So we need to be careful in how we understand and employ the terms “clergy” and “laity.” The fact that both terms are used to describe all Christians irrespective of their office in the Church should alert us to the possibility of abuse. For the sad truth is that, in some situations, it seems as if the local church could not exist without the ordained minister. He or she is involved in every aspect of congregational life and “does everything” (and too many local churches are too happy to let him or her do everything). An equally dangerous error is to disparage the ordained ministry. Clergy are not just hired hands to do what no one else is willing to undertake. The sacred ministry is more than a “secretaryship, a sort of general manager’s job, a device to save trouble for the majority of the church members by concentrating nearly all their duties upon one or two,” as the Congregationalist Bernard Manning once put it. What we often think of as the ministry of the clergy is, in fact, the ministry of the whole Church.

So the notions of “clergy” and “laity” do not describe an ecclesiastical binary. Nevertheless there is an ordered ministry in the Church. St Paul talks in Ephesians 4 about gifts the ascended Christ gave to his people (v. 8). But what are these gifts? They are “that some would be apostles, some prophets, some evangelists, some pastors and teachers, to equip the saints for the work of ministry, for building up the body of Christ” (vv. 11-14).

Here we catch a vision where the minister is not merely the servant of the Church, but the servant of Christ. And it is from Christ that he or she derives authority, and it is to Christ that he or she owes allegiance. When one of my priests was ordained to the priesthood in Sudbury the guest preacher’s sermon included a masterful exposition of the meaning of “vocation.” But a definite crescendo was reached when, with a tone of defiance in her voice, she said to the congregation: “John is here to serve you. But make no mistake – you are not his masters. John’s call to serve you is part of his primary call to serve Jesus Christ, and he alone is John’s Master.”

The ordered ministry is God’s gift to the Body. Those ordained are first and foremost servants of the Lord and then of the people they are called to serve; dedicated to the task of bringing them to Christian maturity, and anxious to ensure that every part of the Body is working properly, so that the whole Body can be effective in representing Christ to a wayward world. Those called to pastoral leadership ought to be treated as gifts to the Church, and their giftedness must be discerned and endorsed by the Christian community. May God give the Church grace to receive and use these gifts, to the edification of God’s people and to his greater glory.