“I’m an ecumenist because I’m schismatic” 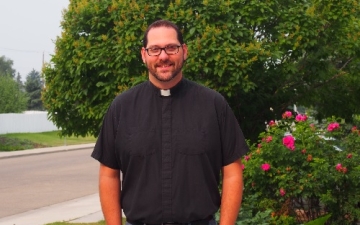 The Rev. Dr. Scott Sharman (left) is a graduate of Wycliffe College, a priest in the Anglican Church of Canada, and professor of Church History at Newman Theological College. He has recently been appointed by the General Synod as Animator for Ecumenical and Interfaith Relations. He lives in Edmonton with his wife and two young children. He blogs for Wycliffe this week about why he chose to study here, and how his studies have helped to prepare him for this new role.

The theologian Stanley Hauerwas has been quoted as saying “I’m a pacifist because I’m a violent SOB.” I often like to riff off of this by saying “I’m an ecumenist because I’m schismatic.” It doesn’t have quite the same rhetorical ring as the original, but it does convey something I hold to be profoundly true: There are few things we human beings are better at than finding ways to differentiate and divide ourselves from others who are different. This, I think, is precisely why we need the Church as a place where God puts us into relationship with all kinds of people, sometimes whether we like them or not. The Church of God is a home for recovering schismatics of all kinds, and relationship with otherness is inherent to the ecclesial task.

My journey into ecumenical and interfaith dialogue began when I was 17 years old. I had grown up going to Church, and called myself a Christian from an early age. But my experience of what it meant to be a follower of Christ had been very narrow: White, Canadian, middle class, evangelical Protestant. When I started University, however, and inevitably went through the mini crisis of faith so common to this stage of life, part of how I came to embrace a faith in Jesus as a young adult was by exposure to and exploration of the vastness of the religious landscape, Christian and otherwise. My Christianity was enriched and expanded by worshiping in other churches and experiencing different liturgies, approaches to the Bible, ethical points of view, etc. My Christianity was challenged and deepened by reading about other world religions and talking with and learning from people of other faith communities. I firmly believe that I am a theologian, a priest, and a Christian today precisely because of these gifts I received from others and otherness.

It was in fact this very experience that lead me to Wycliffe College and the Toronto School of Theology for my graduate and doctoral studies. I chose this place to study because I knew it would put me alongside people from a wide range of Christian traditions and cultural backgrounds, that my professors would be open to differing perspectives and points of view, and that I would be studying in the middle of a University and a city that is among the most diverse in the world. It is in this context that I began to discover a special sense of vocation to the work of theological dialogue across inter-Christian and inter-religious lines. This call to participate in the “ministry of reconciliation” through ecumenical and interfaith dialogue has always been at the centre of my ministry.

I am now preparing to take on a new ministry role as Animator for Ecumenical and Interfaith Relations for the Anglican Church of Canada, beginning September 1 of 2017. I take the title “Animator” to mean that the most important part of my job is to help to bring out the energy, enthusiasm, and activism for ecumenical and interfaith relations that I know is already there among Anglican Christians across this country, and to draw on that as we set priorities and make plans at the level of the Church national. Some of this will be through attending meetings, facilitating discussions between churches and religious leaders, writing reports, and so on. But above all I think my position exists to be infectious about the great gift and joy that I personally know it to be when we reach out across the lines of division and the chasms of difference. Recovering schismatic that I am I now embrace that task with eagerness, and I invite others to join me!