Elizabeth Cady Stanton: Taking a Stand against Slavery and against Racial Equality 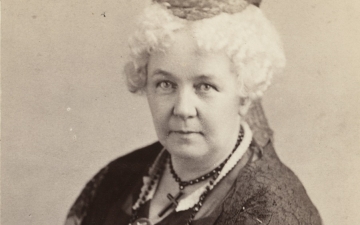 I was first introduced to renowned abolitionist, women’s rights activist, and feminist biblical commentator Elizabeth Cady Stanton (1815-1902) at a birthday party held in her honor at Yale Divinity School. I encountered Stanton again when my research interests turned to recovering forgotten women interpreters of the Bible. I remember how excited I was the day I found her exposition of the Ten Commandments that was buried in her 1860 political speech meant to rouse New Yorkers to act on behalf of slaves. Using a preacher’s rhetoric, Stanton bid New Yorkers to “dig up those mighty tables of stone from beneath the rubbish of ages—from forms and ceremonies, creeds and commentaries, constitutions, canons, codes and statute laws” and apply them in “a higher, broader, deeper” way.”1

Beginning with the first commandment, “Thou shalt have no other gods before me,” Stanton called fellow Americans to “Love justice, speak the truth, do the right ever and always, though like the martyr John Brown—the slave’s Christ—you give yourself a living sacrifice. Bow down neither to cotton or gold; to union, constitution or law; to false judges or fawning priests; but in thy brother man behold thy God.”2

Stanton’s commitment to abolition of black slavery continues in her commanding exposition of the fifth commandment to honor one’s father and mother: “How can the beautiful daughter of a southern master, honor the father who with cold indifference could expose her on the auction block to the coarse gaze of licentious bidders; or the ignoble slave mother, who could consent to curse her with such a life of agony and shame? Or, do you tell us, Sinai’s thunders were never meant for Afric’s ears?”3

Stanton’s advocacy work shifted during the American Civil War years as she focused her energies on women’s voting rights. She found Scripture a less helpful political tool and increasingly viewed its teachings about women as a barrier to women’s rights. Stanton and other feminist social reformers lobbied against the Fourteenth and Fifteenth Amendments, which gave black men the right to vote but excluded women. At the eleventh National Women’s Rights Convention in 1866, African American Frances Watkins Harper (1825-1911) called out Stanton and other white suffragists for refusing to support the suffrage rights of black men:

You white women speak here of rights, I speak of wrongs. I as a colored woman, have had in this country an education which has made me feel as if I were in the situation of Ishmael, my hand against every man, and every man’s hand against me . . . While there exists this brutal element in society which tramples on the feeble and treads down the weak, I tell you that if there is any class of people who need to be lifted out of their airy nothing and selfishness, it is the white women of America.4

Stanton’s elitism and racism would not allow her to heed Harper’s prophetic denunciation. Instead, she ramped up her racist rhetoric in her battle for women’s suffrage.

In the December 1868 issue of The Revolution, the newspaper she published with Susan B. Anthony, Stanton unleashed her rage about the “unwashed and unlettered ditch-diggers, bootblacks, hostlers, butchers, and barbers” who would get a vote before women if the Fifteenth Amendment passed.5 In her address to a women’s suffrage convention a few weeks later, Stanton declared:

So long as there is a disfranchised class in this country, and that class is women, a man’s government is worse than a white man’s government with suffrage limited by property and educational qualifications, because in proportion as you multiply the rulers, the condition of the politically ostracised is more hopeless and degraded. . . . If American women find it hard to bear the oppressions of their own Saxon fathers, the best orders of manhood, what may they not be called to endure when all the lower orders of foreigners now crowding our shores legislate for them and their daughters? Think of Patrick and Sambo and Hans and Yung Tung, who do not know the difference between a monarchy and a republic, who can not read the Declaration of Independence or Websters spelling-book, making laws for Lucretia Mott, Ernestine L. Rose, and Anna E. Dickinson.6

Sadly, Stanton’s racism continued in her support of the black-man-as rapist campaign that was used to justify lynching and led to the deaths of thousands of innocent black men in America’s south. Her views on the Bible also became more radicalized. She hoped The Woman’s Bible (1895, 1898) would expose it as the enemy of women’s rights that needed to be defeated.

Compelled to bring darkness into the light

Stanton’s journey from powerful abolitionist to overt racist advocating for women’s right to vote is highly disturbing to me as is the fact that it is rarely acknowledged by those who celebrate her many accomplishments. She has been rightly acclaimed as an abolitionist and feminist, but evidence shows that her feminism was sullied with racism, and her Bible became a tool of oppression rather than liberation. I wonder, then, how should I remember her?

According to historian Ibrahim X. Kendi “racist and antiracism are not fixed identities. We can be racist one minute and antiracist the next. What we say about race, what we do about race, in each moment, determines what—not who—we are.”

Our allegiances are many, and racism often unconscious. Even as I wish that Stanton, as an activist and feminist leader, would have been willing to hear the rebuke and call to justice of her black contemporaries and even as I wish that Stanton as a biblical interpreter would have continued to find in Scripture a message of liberation and hope for all women and men, I feel compelled to bring this darker aspect of her life and work into the light.

Marion Taylor is Professor of Old Testament and Graduate Director of Wycliffe College.