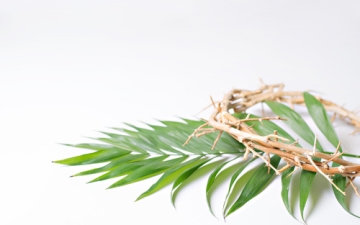 After he had said this, he went on ahead, going up to Jerusalem.

When he had come near Bethphage and Bethany, at the place called the Mount of Olives, he sent two of the disciples, saying, “Go into the village ahead of you, and as you enter it you will find tied there a colt that has never been ridden. Untie it and bring it here. If anyone asks you, ‘Why are you untying it?’ just say this, ‘The Lord needs it.’” So those who were sent departed and found it as he had told them. As they were untying the colt, its owners asked them, “Why are you untying the colt?”They said, “The Lord needs it.” Then they brought it to Jesus; and after throwing their cloaks on the colt, they set Jesus on it. As he rode along, people kept spreading their cloaks on the road. As he was now approaching the path down from the Mount of Olives, the whole multitude of the disciples began to praise God joyfully with a loud voice for all the deeds of power that they had seen, saying,

“Blessed is the king
who comes in the name of the Lord!
Peace in heaven,
and glory in the highest heaven!”

Some of the Pharisees in the crowd said to him, “Teacher, order your disciples to stop.” He answered, “I tell you, if these were silent, the stones would shout out.”

In the previous chapter, Jesus had warned the disciples for the third time that he would be going to Jerusalem, and that there he would be killed. He seems to have set off almost straight away because the next we hear is that he is coming into Jericho, about 25 km west of Jerusalem, where he then healed Bartimaeus and called Zaccheus.

Now, at the beginning of today’s reading, he comes to Bethany and Bethphage (29), probably close to the Mount of Olives, where he borrows an ass, in order to ride the last few kilometres into Jerusalem. The fact that the ass is loaned so readily suggests that all had been arranged beforehand. (Perhaps “The Lord has need of him” is an agreed password.)

And then the crowd begins to cheer. Why exactly? Because the gossip has been growing that Jesus might be the Messiah, after all the mighty works he has done—but he has always avoided saying so explicitly. Now, however, he appears finally to be claiming the title, by his actions if not his words. After all, Zechariah 9:9 had prophesied of the Messiah:

Rejoice greatly, O daughter Zion!
Shout aloud, O daughter Jerusalem!
Lo, your king comes to you;
triumphant and victorious is he,
humble and riding on a donkey,
on a colt, the foal of a donkey.

If the king had been coming as a declaration of war, he would have ridden on a warhorse. But when he rides on “the foal of a donkey,” it means he comes in peace—meaning not simply the absence of conflict, but that “shalom” which is the flourishing of all good things in God’s world. This is an immensely audacious and risky thing for Jesus to do. And the crowd, understandably, goes wild with enthusiasm—Jesus has finally admitted it! The Kingdom is really here!—such that even Jesus cannot, or will not, restrain them.

Of course, we know what will happen next. The moment does not last. But for this short precious time, Jerusalem has one more window of opportunity to receive its king and the shalom that it longs for and that is at the heart of the Gospel. There is a cruel undercurrent of tragedy underlying this scene of rejoicing—not so much the tragedy of Jesus’ death (because we know what will happen on the third day), but the tragedy of those who are offered joy unbounded, look it in the face, and then find reasons to turn it down.

Lord, thank you for your patience in offering us joy. Forgive us our feeble excuses for refusing you. Grant us to open our hearts to you afresh this Easter. Amen. 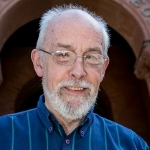 John is the Director of Wycliffe Serves!, the department coordinating the college’s external programs. For sixteen years, he taught evangelism at the college. John and his wife Deborah have two adult children and four grandchildren.