Hope for a threatened world 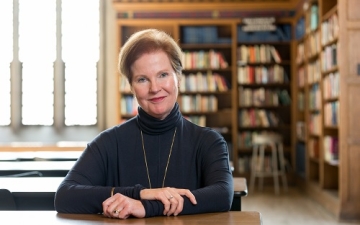 The author’s thesis is that America has given way to magical thinking, a willingness to believe, which in his view, precludes thinking and reason. He analyzes such thinking on the parts of the political and cultural left and right. Locating the roots of the left’s anti-rationalism in the 60’s, the author suggests the right is anti-rational because it is Christian.

I’ve been cringing these past months over what, to me, had been the unthinkable marriage of Christianity and Trump-ism. And this article is just one more thing that pains me. It pains me because I identify as a Christian, and being lumped in with folks and beliefs I totally disagree with is hurtful.

The pain I feel is complicated. It is the pain of feeling deeply misunderstood by someone like the author of that article.

But it is also the pain of not knowing how to respond to those Christians who see things entirely differently than I do.

I wish I could simply discount them, but I feel constrained to take seriously the words of the apostle Paul from the twelfth chapter of his letter to Rome: “we, though many, are one body in Christ, and individually members one of another.”

But before these words, Paul writes: “I encourage you, by the mercies of God to present your whole selves as a living sacrifice that is holy and pleasing to God.”  This, he says, is our reasonable worship. “Do not be conformed to the patterns of this age but be transformed by the renewal of your mind so that you may prove what is the will of God, what is good and acceptable and mature. I ask each one of you not to think of yourself more highly than you ought, but with sober judgement, because God has measured out a portion of faith to each one of you.”

Paul writes these words to the Roman church – a church divided over fundamental cultural differences.

But Paul does not advocate that the strong discount or separate themselves from the weak. Instead, he advocates connection. All those who believe that Jesus is the Christ find themselves not only with individual faith but in an organism – in the body of Christ – profoundly, inextricably connected to others of faith. As profoundly and inextricably connected as a physical body.

Paul’s words to the Romans are his prescription for keeping Christ’s body healthy and connected – an organism that lives.

But he makes it clear that the prescription works only if it is taken.

This is not a prescription that is a concoction that we or any other believers in Jesus Christ can create. It is God’s. And it only works if it is received from the divine healer.

How? Paul exhorts the Romans to present their whole selves to God as a living sacrifice; a perpetual, continual sacrifice. He prescribes being sacrifices by means of the mercies of God. God’s mercies – which is another way to speak of God’s love – are what enable us to give ourselves to God, over and over again.

It is just this God-enabled offering of our lives that allows us to escape the demands and constraints of the age, and to remember that we are bound to others who also recognize Jesus Christ as Lord.

Only as we offer ourselves will we find our way to the place of God’s love. And it is only from that place of love, that our threatened world has hope.