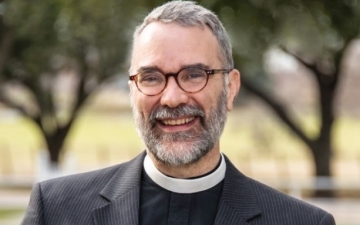 I once said in a Wycliffe class that there were two types of people, either/ors and both/ ands, at which point a student interjected, “but Professor, I think I am both a both/and and an either/or,” which proved the point. It’s an interesting question for the College, which was built after all across the street from its sibling Trinity, today both Anglican and ecumenically evangelical, ministerial and doctoral, pastoral and development, etc. This hybrid quality is part of its strength and its interest.

I bring this subject up since most of the young ordinands in the Diocese of Dallas (a number of whom head north!) could aptly be called “evangelical catholics.” What does this mean? It could mean simply that they come from evangelical backgrounds and are now in a historically Anglo-Catholic diocese, and while this is true, I hope it means more than that. Given the deficits of contemporary North American Anglicanism, we need such future leaders to bring their gifts from their earlier spiritual life into our fellowship, even if they are sometimes ambivalent about what went before. Or it could mean that, as evangelicals, they have come to see that, in our disenchanted time, more pageantry, art, and mystery, a dash of romanticism, are required. While true, this is not enough, as it reduced that catholic side to something instrumental. On the other side of the street, it could mean that as catholics they realize that our culture needs re-evangelization, and again, while this is true, it falls short of explaining what this moniker itself means as an identity.

For the Reformers, you came to understand things as you went ad fontes, back to the sources, and so we ought to do here as well. (A good example of this is The Gospel and the Catholic Church by Michael Ramsey, which seeks to get to “catholic” by starting with the Gospel and drilling down on its implications). Here then are five features of the Reformers, which are encouragements to this most recent of both/and Anglican self-understandings. First we come from a shared Augustinian theological tradition of grace and election. The Reformation was an in-house argument. Second, the Word of God read, preached, heard conveys the real presence of Christ to the believer, an understanding with a “sacramental” dimension. Third, the Reformation Lutheran tradition is “realist” in its account of Christ’s presence in the Eucharist. Fourth, the ecumenical movement has helped us think through such supposedly contrasting terms in a new way. For example, “apostolic succession” can refer both to the passing down of the teaching of the Gospel, and to the persons called to symbolize and guard this passing on, especially as it holds the two together (in spite of how often bishops disappoint in this vocation!).

Over the fifth reason I want to linger a bit more. As the resolutely evangelical missionaries of our tradition spread out throughout the world in the 19th and 20th centuries, by God’s grace, through evangelists on every continent, a worldwide, “catholic” fellowship came into being. As such it now must face questions hearkening back to catholic conciliar history. Mission necessarily entails both. (This could be related to the desire recently to see the missional as itself a mark of the Church). So, for example, to make sense of our situation in a post-modern world, evangelicals and catholics alike reach back to the Patristic period, and in so doing engage in an “evangelically catholic” endeavor.

I am grateful for our young ordinands who understand themselves so, and I take heart in their efforts. And to prepare this next generation to retrieval, and practice, both “evangelical” and “catholic,” together, in the variegated confusion of our moment, nowhere is better positioned than Wycliffe College.

George Sumner is Past Principal and Professor Emeritus of Wycliffe College.