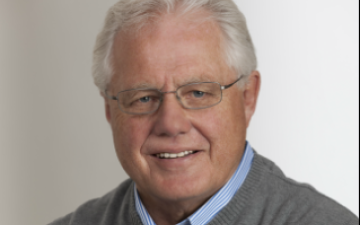 Wycliffe College Alumnus Brian C. Stiller (W '75, M.Rel.) has been one of this country’s most prominent evangelical leaders, having served terms as President of: Youth for Christ (Canada), the Evangelical Fellowship of Canada, and Tyndale University College & Seminary. Since 2011 he has held the position of Global Ambassador for the World Evangelical Alliance, a global alliance serving some 600 million evangelical Christians.

Q: You graduated from Wycliffe with a Master of Religion in 1975. Out of all the places you could have chosen to study, why did you - a Pentecostal from the Prairies - choose Wycliffe?
BCS: It was the only Evangelical graduate school in eastern Canada [at the time] where I could do graduate theological studies.

Q: What was Wycliffe like back then?
BCS: It was warm and friendly. Registrar Dr RK Harrison was kindly disposed to my studies, which I had done under Alvin Schindel at Central Pentecostal College in Saskatoon. Harrison examined my record and gave credits for some of my courses. I was amazed that an Anglican school would be open to those credits. Recall this was in 1971.

Another story relates to Richard Longnecker. I was in his first class, with only a few taking it as he was quite unknown. His prayer at the beginning of each class was quite out of the ordinary, simple yet profound, forecasting the kind of lecture he would give, scholarly but with a pastoral touch.

Q: You’ve had a long and accomplished career – but that career was already well underway by the time you came to Wycliffe. What hopes lay behind doing the M.Rel, and how did you see those hopes furthered or realized as a result of your time here?
BCS: I had a deep hunger for further studies. I did some graduate work in Montreal with a former Jesuit, Dr. Davis. His assumption was that orthodoxy was of the past. This generated in me a longing for serious study that would tax my abilities to think and write. But I also wanted to locate my faith within a more disciplined and historic setting.

Q: What impact did your Wycliffe studies have on your faith in Christ?
BCS: They introduced me to a wider array of church thought through the ages, helping me understand that I was in a direct line of centuries of Christian thought, doctrine, and spiritual movements. I wanted to interact with the intellectual and devotional minds of my fellow travellers.

Q: What is the value of pursuing graduate theological education for evangelicals today?
BCS: It deepens one’s life in so many ways. The very discipline of more demanding work sharpens one’s ability to think through issues and put forward your case. Then there is the matter of biblical understanding. There is no substitute for working more deeply in the biblical text, and that discipline is deepened by graduate studies. However, one of the most important aspects is peer learning: one’s classmates are critical in learning. That’s my regret: I did my work part-time and did not have the opportunity to build friendships and to experience the interaction of student learning.

Q: Since 2011, you have worked as Global Ambassador for the World Evangelical Alliance. You see the church in all of its beauty, diversity, and yes, challenges. What words of encouragement or advice could you share with current or future seminary students?
BCS: Explore. Refuse to let your initial or current vocational world box you in. World opportunities are all around, often requiring a different level of risk and faith to explore.

Q: What are you currently working on?
BCS: I just finished From Jerusalem to Timbuktu: A Global Tour of the Spread of Christianity. While I continue to visit up to 20 countries a year, as the global ambassador of the WEA I visit some of our 130 National Alliances (in Canada that’s the Evangelical Fellowship of Canada). There are two current projects: one is to refresh the global organization. It began in 1846, and it is the second largest global Christian association representing some 600 million Christians. Secondly, I’m beginning to research and write a kind of autobiography with a special interest in reviewing the growth of evangelicals in Canada as seen out of my life experience.

Q: From your current, globally-rich perspective, where do you think today’s Christian leaders ought to be focusing their efforts?
BCS: Western society assumed that with a rise in education, the improvement of living standards, and a more sophisticated society, that Christian faith would go by the wayside. This seems to be happening in our Canadian and Western world. The mysterious, the transcendent is being diminished. The church can get caught up in a banal form of faith, one that is framed by our search for pleasure and ease rather than discovering a call to rigorous faith. This is so antithetical of the biblical call, and so out of step with what is going on globally. The Global South (Africa, Asia and Latin America) has exploded in faith. These regions are becoming the sending places of faith, the hearts from which the missionary movements begin and from which they spread.

When younger clergy and Christian leaders ask me what they might do, I suggest trying something that calls for a risk of faith. Not necessarily to leave home and go elsewhere (although maybe), but to find within their community something that needs doing, that stretches them past their training and comfort, so that we might see the hand of the Lord in ways we would never see it otherwise.

The Gospel, as Fleming Rutledge reminds us in The Crucifixion, is a bold and risk-taking activity of the Lord, our template for ministry.