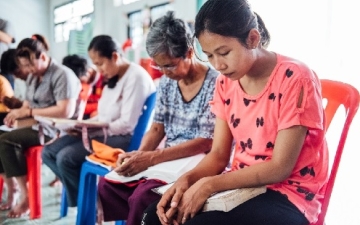 Langham Partnership Canada exists to equip the next generation of Bible teachers.

The name John Stott has always been significant in my family. Not only because of his vital role in shaping evangelical Anglicanism in the 20th century but also because my father served his curacy [a term as an assistant to a parish priest] under John. Uncle John, as he liked to be called, had a long-standing relationship with Wycliffe College. When my father met him on one of his first visits here he asked my Dad to come to England for a visit. That visit turned into a curacy and five years of ministry with John.

When I am with people who know of John Stott I like to say that my claim to fame is that Frances Whitehead is my godmother. Frances became John’s administrative assistant around the same time that my father became his curate. When I was baptized, my parents asked Frances to be my godmother. While my father returned to Canada a few years later, Frances continued as John’s study assistant until he died in 2011. Although the name Frances Whitehead is not as well-known as that of John Stott, she played a huge role not only in supporting him but in the formation of what became Langham Partnership. In 2014 John Stott’s Right Hand: The Untold Story of Frances Whitehead was published. The biography tells the story of the essential role Frances played in John’s ministry.

John Stott’s ministry at All Souls, Langham Place and his leadership in Evangelical Anglicanism in the U.K. had a huge impact, but his impact on the global church has, if anything been far more significant and longterm. Langham Partnership grew out of his work around the world (particularly in the Majority World). John had a great passion to help equip the church in the majority world to do gospel ministry. With its focus on supporting and developing majority world scholars, publishing commentaries and theological resources for the majority world and its very practical preaching workshops and preaching clubs, Langham continues to have a huge impact on the church.