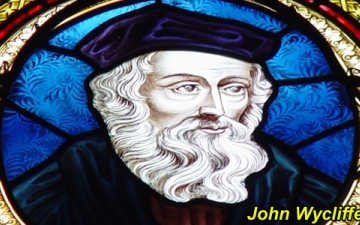 John Wycliffe, as seen in a stained glass portrait, which is featured as a part of one of the windows in Founders' Chapel at Wycliffe College.

The man for whom Wycliffe College was named lived a relatively short life by today’s standards; he was about 64 when he died in 1384. Of course, people did tend to live shorter lives in the fourteenth century than they do today.

But death was not the final chapter in the story of John Wycliffe’s earthly journey. He was condemned as a heretic at the Council of Constance, in 1415. Then in 1428, by order of the pope, his remains were dug up, publicly burned, and his ashes scattered on the waters of the stream near his home.

What had the theologian, philosopher and seminary professor done during his lifetime to inspire such retributive action? Among other things, his crime was that he had participated in translating the Bible into the English vernacular.

It’s interesting to recognize that the translation of the Bible associated with John Wycliffe, was not the first English translation. For that, we have to look back to the Venerable Bede in 7-8th century Northumbria and his translation of the Gospel of John into Old English, of which nothing remains.

Wycliffe supervised and assisted in the work of translation but it is doubtful if he did much of it himself. We know he had collaborators. Nicholas Hereford translated the major part of the Old Testament from Latin and it was a very literal translation.

The New Testament first appeared about 1380 and the whole work was finished in 1382, two years before Wycliffe’s death. Soon after, a revision of the translation by John Purvey—a pupil of Wycliffe’s—appeared. So what we have then is the first complete translation (from Latin) of Scripture into English in 1382.

There was a second edition of the translation largely the work of John Purvey, Wycliffe’s former secretary. Both versions circulated, their popularity indicated by the number of manuscripts remaining. Both appeared some 100 years before printing was introduced into England by William Caxton. Not until 1731 was Purvey’s New Testament printed, then in 1848 the earlier New Testament, and finally in 1850 the entire Wycliffe Bible.

This blog post is excerpted from a video series due to be released this fall, Manuscripts, Martyrs and Moveable Type: The Story of the English Bible, one in a series of events and offerings commemorating the 500th anniversary of the start of the Protestant Reformation. With the dissemination of the Word of God being central to the commitments of the Reformers, the series provides a detailed introduction to the story of the English Bible as depicted on the windows of Founders' Chapel, Wycliffe College.