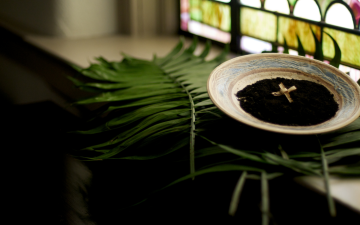 The word lenten, the Oxford English Dictionary tells me, is older than the word Lent. In Old English lenten was in fact a noun, and it meant simply “spring.” Later it became the favored term for the forty-day period of fasting and penitence between Ash Wednesday and Easter, symbolic of Jesus’ forty days in the wilderness after his baptism. Eventually the word got shortened and became Lent; and now (through one of those curious transformations that mark the history of language) the older noun has become the adjective.

It might seem that the relation of Lent to spring is merely an accident of geography. While Lent may indeed coincide with spring in Europe and North America, that isn’t the case for Christians in the southern hemisphere. Still, I find the older connotations of the word richly suggestive. Lent is about a greening of sorts, a quickening, a making-alive after death, or rather through death. In the Fourth Gospel—interestingly, the one gospel that does not describe Jesus’ sojourn in the desert—Jesus declares: “Truly, truly, I say to you, unless a grain of wheat falls into the earth and dies, it remains alone; but if it dies, it bears much fruit” (John 12:24, ESV). We rightly associate Lent with dying: dying to self, dying to the world, dying to the familiar and reassuring. We “give up” things for Lent: chocolate, alcohol, beloved TV shows. Although one thoughtful Christian of my acquaintance gave up not watching television for Lent; she despises the medium, and so watching it becomes for her a form spiritual discipline, an askesis. A reminder that there is no single way of keeping a good Lent.

Lent, then, is practice in dying—the very pattern of Christian discipleship. Only we must remember that the dying is not for its own sake. The dying is for the sake of life. The trajectory of Lent is all toward Easter, where the God of life triumphs gloriously over death. Lent, we might say, is the set of disciplines we undertake so that when Easter comes we can welcome it with the joy it deserves. Only by shedding ourselves of certain things—burdens, distractions, idols—will we be able to notice joy when it irrupts among us.

Being a Christian means not only “giving up” but “offering up.” The Bible’s word for this is “sacrifice.” We sacrifice because we have received literally everything from God; therefore it’s appropriate that we give ourselves back to God. The Old Testament sacrificial system is God’s gracious provision for his people, giving them a time and space in which to meet him and make their offerings: one for thanksgiving, another for healing, another for ritual impurity, another for sin, and so on. Christ is not just the fulfillment of this pattern, he is in fact its original source. He is the very reality of sacrifice, the Sacrifice, and so to be “in” him is—once again—to lead a sacrificial existence. As Paul puts it in Romans: “I appeal to you therefore, brothers and sisters, by the mercies of God, to present your bodies as a living sacrifice, holy and acceptable to God, which is your spiritual worship” (Rom. 12:1, NRSV).

Of course, bodies are exactly what has been missing in this year’s Lent. We really ought to be gathering as bodies, as “living sacrifices,” to mark Lent together. The liturgy for Ash Wednesday is among my favorites in the Christian calendar, not least because it has one of the best collects ever (a cóllect is a prayer that “collects” or gathers up a particular theme):

Almighty and everlasting God, who hatest nothing that thou hast made, and dost forgive the sins of all those who are penitent; Create and make in us new and contrite hearts, that we, worthily lamenting our sins and acknowledging our wretchedness, may obtain of thee, the God of all mercy, perfect remission and forgiveness; through Jesus Christ our Lord. Amen.

This is a prayer that cries out to be said together, as each of us is marked with a smudge of ash in the shape of a cross. “Remember that you are dust, and to dust you shall return.” It’s both a deeply personal and a deeply corporate act. There’s a place for livestreamed church, I know that, and I’m grateful for the possibilities of worship and fellowship it’s afforded so many of us. Still, it’s no substitute for the literal, fleshy, gathering of the body of Christ. We need to learn to be dust together.

After a day spent sitting at my desk and staring at a flat computer screen I long to get out and taste the world. I go for long walks. I’m lucky enough to live close to Toronto’s High Park, whose woods and paths have become my close companions over the past months. Not long ago I discovered a trail I hadn’t known before; it’s near the north end of Grenadier Pond, where hundreds of ducks congregate each day in a cacophony of quacking. As I walked this trail I could hear the snow crunching under my feet and see the bleak, bare branches of the trees. Suddenly I was struck by an unexpected awareness of colour. Then I looked again, and noticed that many of the smaller twigs and branches were tinged with a faint, almost imperceptible shade of green; taken together, they formed a kind of green mist all around me. Half a foot of snow on the ground, and the trees knew that it was time to be getting ready for spring.

So that we might once again pay attention to the life God wills for us, God gives us Lent. Let us use it well. May the time of giving-up and offering-up be a time of life.