My Journey with Jesus: A Symphony in Five Movements | Wycliffe College
Skip to main content

My Journey with Jesus: A Symphony in Five Movements 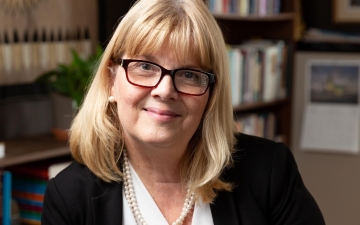 It began in my childhood home in northwest India. My father was a Canadian Anglican priest who, after serving as a padre during the horrors of the Second World War, went to minister to a leper colony and small Anglican parish in the foothills of the Himalayas. My mother was an Australian Methodist obstetrical nurse from Melbourne. They met in language school, and together they served in northwest India for 15 years before returning to the Diocese of Ottawa. Looking back, I realize I took the Christian practices and ethos of our home completely for granted. My mother read us Bible stories and played records that taught us Scripture through music. My father led us in prayers at meals, at bedtime, and when anyone was ill. We all went to church on Sundays.

After we moved “home” to Ottawa, it was my job to run my father’s breakfast sandwich across the rectory lawn to him, in between the first two of four Sunday services. I sang in the Junior Choir at one service and worked in the nursery at the next. On Wednesdays, I attended Junior Auxiliary (a sort of Anglican Brownies), and I was confirmed at age 12 (full disclosure—I thought of this as graduation from Sunday School and was quite excited about that). Over the years, though, I had no idea how much Scripture was being poured into me, and how prayer had become a natural part of my everyday life; much like the fish that doesn’t recognize the water in which it swims. Such was my early formation in Christ.

The second movement in my formation came during my teens when a strange proposition was made to me; that God might want a response from me. This idea was presented by a couple of young Christians that the Diocese of Ottawa had hired to travel around and talk to the youth groups of the diocese. Brian and Cindy Allen were their names. Brian had long hair and a beard. Cindy wore beads and played the guitar. They lived in a Volkswagen camper van. (I’m not making this up. It was the early seventies.) And so it was that at a perfectly ordinary yet extraordinary youth group meeting I thanked God for making His presence known to me over the years and committed to living as a follower of Jesus. Although that commitment proved subsequently to be a little on the shaky side of things, I never forgot that night.

The third movement of my formation came as a result of ecumenical experiences that I seemed to fall into on a regular basis over the next three decades. Dating a Jesus-freak here, going on a teen missions trip there, attending a Roman Catholic Cursillo weekend here, enrolling kids in a Brethren Kids Club and a Christian Reformed school there. All the while attending very ordinary Anglican parishes, I was amazed by so much of it. The raucous yet oddly meditative singing of Pentecostal choruses (whoever heard of singing the same Bible verse ten times?), the reverence involved in a visit to The Blessed Sacrament (so glad I was in a group since I didn’t have a clue what this entailed!), the speed with which seven-year-old Brethren kids recited the names of all 66 books of the Bible, and the determination of Dutch women putting together 300 apple pies for a school fundraiser. My view of the family of God was expanded beyond anything I had ever imagined.

The fourth movement began with a mystical experience. I’d be happy to tell you about it in person, but I find it hard to write about. In short, it entailed a call to ordained ministry in the Anglican Church of Canada; something that had never before crossed my mind. I had grown up in a rectory and had long ago determined I would never marry a priest. I had my career path all planned. I had completed a Master of Applied Science degree at McGill and was working in a job I loved. We had just built our dream home. I had three young children, for goodness’ sake!

Yet, the necessary doors all flew open and I arrived at the imposing entryway of Wycliffe College. Scared. To. Death. What did I know about studying theology? I was a science major, for heaven’s sake! But those were three wonderful years, in which I was further deeply formed as a follower of Jesus. I still remember the day when, while reading Barth, I realized how very small and limited my view of God had been. The majesty, power, mystery, and expansive grace of God literally exploded upon me. It was this theology that I leaned into and which sustained me during the subsequent 15 years of parish ministry.

Finally, the fifth movement of my formation in Christ.  Of course, it’s the stage of life I’m now in; serving as an Anglican priest, a Professor of Evangelism, and as Director of the Institute of Evangelism. I learn so much and am being so formed by the churches I work with, the students I teach, and the research I read or conduct. Most importantly though, I continue to be formed by the disciplines of prayer, the study of Scripture, and corporate worship. Lately, I’ve been discovering how crucial these are, particularly in the storms of life. Although God can seem to have disappeared entirely, I’ve learned that He is strangely found in the very heart of the darkness. So here I am today, learning about trust.

It seems right and good to thank God from the depths of my being.  For of course it’s God who has formed me throughout each of these five movements. Sometimes I wonder why He loves me as much as He does; so much that He refuses to ever let me remain stuck. But then that’s who He is and part of what He is up to. There is a symphony He is creating in and through all of our lives, at which I am amazed, and for which I am most joyfully grateful.

Judy Paulsen is Professor of Evangelism and Director of the Institute of Evangelism at Wycliffe College. In the Winter 2020 semester, she will teach Gospel, Church & Culture, a course exploring the relationship between the Gospel, Church and culture, and what their interaction means for leadership in today's Church. If you enjoyed reading this reflection, you might also like Judy's blog on "Why It's Never Too Late to Study Theology."