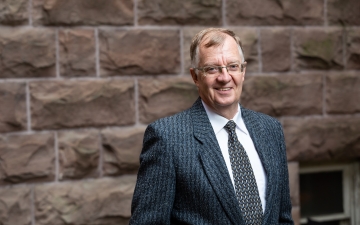 The process of developing a sermon by drawing meaning out of a biblical text (also known as exegesis) does not have to be complicated. Having preached and taught preaching for decades, I’d like to offer nine simple steps (with suggested amounts of time to invest in each) that can take a conscientious preacher (or Bible teacher) from biblical text to message with confidence.

1. Pray for a reverent, disciplined, attentive inquisitiveness, one that will lead you to understand the text first, and only then to a sermon idea. This can be scary at first, as it means that you will have no idea what the subject of your sermon will be—until you have carefully studied the passage. Several minutes.

2. Check to ensure that there are no massive textual problems with your passage (such as are noted in the New International Version (NIV) at John 7:53-8:11 and at the end of Mark, for example). Similarly, with an Old Testament text, compare a few translations to note any huge differences in meaning, such as at Psalm 22:16 where the Jewish Publication Society Version (JPSV) has “like a lion” and the Revised Standard Version (RSV) “they pierced.” The JPSV is especially useful for such cross-checking purposes. If a problem exists, add it as an item for follow up in stage 6 below. No more than five minutes. Hint: Such problems are so rare that you can almost always move on to the next step.

3. Check a few authoritative translations to make sure any passage you’ve chosen is a complete paragraph with no verses left out. (Where a whole unit is too long to read or preach, study and preach having reckoned with the whole nonetheless.) No more than ten minutes.

4. (Re-)orient yourself to the book in which your passage occurs by reading the Introduction to the book in a few detailed study Bibles (e.g. the NIV Study Bible). Note the setting, date, etc., but pay the most attention to the following:

a. Any statement regarding the book’s purpose(s), theme(s) or theology. Regard such statements as gold; valuable in themselves, they also are pointers to that with which your passage likely has something to do.

b. The outline of the book given at the end of the Introduction. Note where your passage occurs within the outline and ponder the relevance of the title of the heading(s) under which it comes. Now go back to the overall Outline and look for the explanatory notes in the text of the Study Bible itself for notes on each major heading that discuss the thematic or topical change denoted by that heading. Increase the detail with which you make notes on such headings as the headings draw closer to the place where your text is located. Twenty to thirty minutes.

5. Read your passage three times, along with the passages before and after indicated in
the outline heading (or sub-heading) to which it belongs. Now with pencil in hand and brain on full alert, inquisitively “sketch,” in considerable detail, the contours (wording, twists and turns, etc.) of your passage. Pay attention to such things as what is said, not said, how much attention is given to this or that, contrasts, and especially, what is most emphasized, whether through repetition or returns to a main notion. The goal is intense familiarity with how the text says what it says (for therein lies its meaning) and, so far as you can tell, why it says what it says. The “why” here is often your point of departure for connecting your passage to one of the themes or purposes mentioned in the Introduction. As well, knowing why your passage says what it does most often reveals a pastoral purpose that can (and should) logically form the basis for your sermon. The more your sermon idea is in sync with the idea and flow of the passage, the easier it will be for you to construct, track—and for others to follow—your sermon. This part takes practice; two hours for beginners, 45 minutes for the more experienced.

6. As you think about preaching the passage, a few key questions might arise, either from the text or from the pastoral context of your hearers, that you feel must be answered. (For example, what does “propitiation” mean or what shall I say about this passage on divorce to those in the congregation who are divorced?) Having noted the questions, follow up on them in the next stage. Ten minutes.

7. Now go to good commentaries (i.e., exegetical and theological, including some past classics). Check your understanding of the text so far against them, glean additional insights from them, and look for the answers to the questions you noted in step six. Sixty minutes.

8. Next, recap your efforts thus far by summarizing in one sentence the meaning of the text (or better, what the text is “doing”) in its context. Try for a fresh statement, not a rote-rehearsal of what the text states. To force clarity, break your statement into a subject that begins with who, what, where, when, why or how and a predicate that answers only that question. (Sometimes, as arguably with John 3:16, you might have two questions, and thus two answers; in this example, “how much God loved the world and why it matters,” followed by an answer to each.) Thirty minutes.

9. Finally, to formulate the sermon idea, adapt this summary statement to the context of your congregation by simplifying it (using no more than 12 words) while deviating as little as possible from what the text was saying and doing in its context. For the sake of clarity, whether you preach it in this form or not, cast the sentence once again into the same subject-and-predicate form. Twenty minutes.

By following these steps, you will be making efficient use of your Bible-study preparation time, and will be well on your way towards a clear, relevant sermon that is truly based on the text of Scripture. What have you got to lose? Give it a try (and don’t be hard on yourself if you don’t always succeed at getting to the why and how in stage five).

Glen Taylor is Professor of Scripture and Global Christianity at Wycliffe College.