Prayer in the face of fear 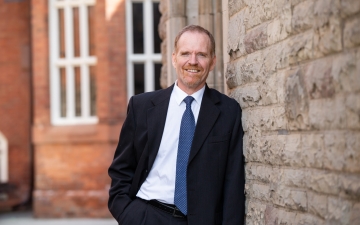 There is nothing to fear but fear itself.

In his inaugural speech as president of the United States (March 4, 1933) Franklin Roosevelt began by saying “let me assert my firm belief that the only thing we have to fear is ... fear itself—nameless, unreasoning, unjustified terror…”

Is there anything more powerfully destructive in our lives and in our world than fear?

Fear causes us to do extraordinary things—to lie, to mistreat or exclude others. Fear destroys relationships, it causes all kinds of health issues, it leads to betrayal, deceit, violence. In these strange days we have seen the destructive power of fear in many ways. It is sobering then to see politicians use fear as a tool to motivate or manipulate others.

In 2015, following the bombings in Paris, Francois Hollande gave voice to the anger and fear of the French by declaring war on ISIS. We will destroy the enemy. But destroying the enemy is a little more difficult than it might appear. It may be politically expedient to promise to deal finally and fully with our enemies, but it seldom does much for root causes of fear.

Our day to day fears may be more immediate—fear for our families, fear of disease, fear of losing our jobs. There are so many things to fear. How do we avoid being overwhelmed by fear? Getting rid of an enemy only works until the next enemy comes along.

Psalm 3 could have been written for our times. At first it might appear to follow the simplistic pattern of putting our hope in taking out our enemies. God is on my side, the psalmist appears to say, and God will destroy my enemies, take vengeance on them. The psalmist speaks of the thousands of enemies who are gathered against him. He then calls out to God to come and destroy his enemies, to save him. “Rise up, O Lord! Give me victory, O my God! Oh, that you would smite all my enemies on the cheek. Oh, that you would smash the teeth of wicked men.” We can almost taste the powerful emotions of fear and anger. And yet, we should be wary of seeing this as a portrayal of a God of vengeance who will take our side and wreak havoc on our enemies.

Psalm 3 happens in the context of Absalom’s rebellion against David. That long and sordid tale involves many other characters too: Bathsheba, Uriah, Amnon, Tamar. Rape and murder are the order of the day and the conflict between David and Absalom ultimately leads to a civil war in which more than 20,000 people are killed. David finally triumphs but there is no joy in this victory. As Absalom’s army is fleeing Absalom himself is caught in the branches of a tree. Joab, David’s commander in chief kills Absalom as he is hanging. This story seems almost too extraordinary to be true; what family could ever be so dysfunctional?

Who is the Enemy?

So, who are these enemies of whom David speaks? His son Absalom? His own family? The people of Israel? It becomes a little difficult to see how David would pray that God would destroy the people arrayed against him, his own people, his own family. After Absalom’s army is defeated and Absalom is killed David mourns and says, how I wish that could have been me rather than Absalom.

David is a mature man at this point in his life. He is no longer the young, naive shepherd who killed Goliath. He has been battered and bruised by life and he is becoming aware that he has inflicted a lot of damage on others, including his own family. He knows that many of the roots of the issues he is facing begin with his actions. He is the one who has got his family and his country into this mess in the first place. So, who is the enemy?

In Ephesians 6 we are told that our enemies are not flesh and blood but principalities, powers, the forces of darkness in this world. That letter is written to a church which is struggling with division, with people taking sides against one another. The real enemies of the people are identified as deceit, violence, envy, pride, hatred, impurity, addiction, darkness, and fear. All those things which work to distort our lives and destroy our relationships with God and with one another. So, how do we stand up, how do we survive when we feel overwhelmed by what we are facing; overwhelmed by such complex enemies?

There is a significant shift that happens in the psalm.  In verses 1 and 2, the focus is on those arrayed against David—how many are my foes; men are rising against me; many are saying ‘there is no help for you in God.’  But in verse 3 the psalmist turns to God—Lord, you are a shield around me, you are my glory, you lift up my head. When David is focused on the forces arrayed against him he is overwhelmed. His foes grow larger, more formidable, more deadly. But when he turns his attention to God his foes are put in their proper place, they are put into perspective: I lie down and sleep, I wake again, the Lord sustains me. I am not afraid of 10,000 people who have set themselves against me, all around. Deliverance belongs to the Lord.

The Psalm anticipates the cross. Jesus dying on the cross points to the true enemy, the source of all fear—it is the power of sin and death and how it distorts and manipulates human beings to live in ways in which we are destructive to one another and to God’s purposes for the world. Jesus exposes our true enemy and shows us how we have been shaped by that enemy. In the cross God robs sin and death of their final power, not by annihilating them once and for all, but by exposing the reality that even when they do their absolute worst they have no power over God, which means they have no ultimate power over us.

This is no quick and easy solution to the power of fear.  It involves the regular taking up and putting on the full armour of God. Throughout history the psalms have been used as part of people’s daily pattern of prayer even though praying the psalms or just praying regularly is difficult to do particularly in the midst of times like these. We deceive ourselves if we think that prayer must be meaningful, intentional and fulfilling to be real. When we pray the Psalms, they work on us even when we are not aware of it. They begin to reshape our hearts and minds, reordering them towards the truth and presence of God. Even if there are times when all we can do is pray them over and over again.

What our world needs now more than ever is people of prayer who are able to find their hope in a faithful God. Prayer is not our endeavor to get the attention of a distracted God, or trying to get God to take our side. Prayer is the practice of turning to God so that over time as we gradually begin to see God more clearly our fears are displaced, our hope is enlarged and we are given the courage to go out into the world learning to live in the truth that Jesus is Lord of all.