Reflections from a Covid-couch: Jesus comes to where we are | Wycliffe College
Skip to main content

Reflections from a Covid-couch: Jesus comes to where we are 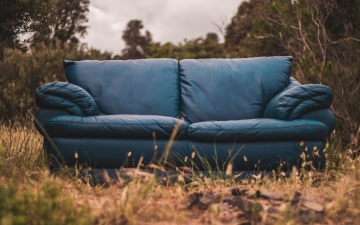 Senior Research Professor and Old Testament scholar Christopher Seitz recently contracted Covid-19 after having been vaccinated. His symptoms—while relatively mild—have nonetheless been disruptive. In the midst of his recuperation, he wrote this sermon using Mark 7: 24–37 (the story of Jesus’ encounter with the Canaanite woman) as his text, and granted permission for it to be shared here.

Short and sweet—would be a good way to refer to Mark’s Gospel. Or perhaps better: short and sharply sweet.

I had the privilege of hearing the famous stage actor Alec McGowen perform a reading of the gospel of Mark in a small New England church. After he converted to Christianity, he memorized it and did the whole thing with only a stool as a prop. What hit you was: Mark wrote not for the eye but for the ear. Short, moving briskly along. And sweet, written for the ear and the heart.

We see a strong will in this story from the biblical book of Mark. A Canaanite woman. It would be easy to mislocate her on the canvas of Jesus’ many healing encounters recounted in Mark. She’s from the wealthy region of Tyre, rich from Mediterranean shipping. Linen, caviar, dyes, high-end. She has picked up that Jesus has his ministry among his own people, and he has wandered out of his usual zone. Yet he has done so on purpose.

Mark says, “he crossed over, set out, went away.” Into the Greek-speaking regions of Tyre and Sidon.

A lot of people read Jesus as being upbraided in the encounter. Caught up in his parochial Jewishness. Food given to dogs is hardly a positive image. She pricks his conscience. He changes his mind. A Google search will pull up dramatic titles for recent studies of the text, like “The woman who changed Jesus.”

Mark says nothing of the kind. What the nameless woman does is remind Jesus that the food given to his own people, at his own hand, is more than enough to spill into regions needing his healing touch. Then does Jesus respond, “for saying that, go, the demon has left your daughter.” Hearing her speak the truth—to Israel first, then to the nations—Jesus works his act of healing, restoring this woman’s daughter to new life.

What is striking is how attractive Jesus is, for those who are in need. She comes all alone, in the full light of day, in the full light of a daughter possessed. Mark says he didn’t want anyone to know he was there. Yet he could not escape notice, we read. How is that? What is it about this man? A totally unknown woman, speaking another language, yet somehow knowing this man who crossed to her side is at the very center of her present universe.

A wise man once said:

“Never was one more approachable than Christ. No rough guards pushed poor petitioners aside. No array of officious friends were allowed to keep away the importuning widow or the man who clamored that his son might be made whole. The hem of his garment was always trailing where sick folk could reach it, and he himself had a hand always ready to touch the disease, an ear to catch the faintest accents of misery. A soul going forth everywhere in rays of mercy, just as the light of the sun streams on every side beyond that orb itself. By being laid in a manger he proved himself a priest taken from among men. One who has suffered like his brethren, and therefore can be touched with a feeling of our infirmities.”

That’s got to be it. Even when he wants to be on his own, his graceful gravity speaks for itself. The hem of his garment trails, before and behind.

It is so important to keep this in mind. Jesus cannot hide himself away, can never be hidden, from anything and anyone and that is what makes him the man he is. Makes him not like us, and so always there for us. We choose when and where to be available. Jesus’ to-do list: everything, everyone, everywhere. “He has done all things well” is not flattery, but fact.

When you touch Jesus, demons flee. Known to you, not known to you, but known to him. As his church, we are his body assembled here, each garmented by Jesus.

Just being here, right now, makes that so. We stand alongside the willful, thankful woman from Tyre. He goes into regions we need him to go, as we hear his word today.

“Immediately”—Mark’s favorite word—Jesus is on the move. North to wealthy neighbor Sidon, hard right, then south, to the eastern side of the Sea of Galilee. The Decapolis. Like Tyre and Sidon, a place where Jesus’ own people are the minority, overshadowed by the Greek-speaking populace.

The ten cities of prominent Greek colonists with a special carve-out from the Romans, squat in the middle of Israel’s ancestral land. I can think of no better place for Jesus to say, “I can’t be bothered. They have it all. Didn’t I tell my own disciples ‘Go nowhere except unto the lost tribes of Israel’? Here, we are dogs eating from the master’s table.”

And what does he find? Need. Just as in Tyre. The crowds seek him out. They bring a man deaf, unable to speak. They don’t ask for the newest technique. They don’t tell of past efforts. In Mark’s economic prose: “And they besought him to lay his hand upon him.” Jesus does and more.

One of the cities of the Decapolis is Garasene, the place where he drove demons out into swine. That man asked to go with Jesus, not knowing he would be back in the short time he had left with us.

Jesus put his fingers into his ears and he spat and touched his tongue. Jesus is going to the source of the problem, the tap root, and putting himself there.

My wife had a lung transplant and went through a terrible ordeal of decline. The operation must take hold, it’s not replacing a battery, and for six days she was in a forced sleep. Reanimation, the French call it. I would say my prayers in the small chapel next to our house while the days passed. There above the altar was the portrait of Jesus, his chest opened to show a sacred heart, with thorns encircling it.

When the lungs fail at last, the heart must bear the burden, as if crowned with thorns.

Jesus was all-in for us. He did not smile from afar. He did not consult the newest National Institutes of Health manual. He laid his life on the line. He went to the vilest places, the scariest, places shameful and the proud both, and he went there to heal and to win a victory, even over death.

Which probably explains why he again says, “tell no one.” His real and final work lies ahead. As significant as these works of healing are for those who touched his garment, they are foretastes of his greatest work, his march into death, ahead of us, so as to bring us with him into the place he has prepared for us, forever with him.

The place we join him on our journey today.

Our proud and self-sufficient Tyre’s, Sidon’s, and Decapoli: we bring them here today. And we lay our trophies, such as they are, at his feet. Asking him to go deeper, to plunge his hand into the places that no longer function well, or that never did. We are assured by these two short and sweet accounts that Jesus is always up to the challenge, 24/7, and able to surprise us with his knowledge of where we need him, and there he goes. Immediately, as Mark likes to say.

I caught Covid post-vaccine, and the first day was hard. I had been trying to embark on a new prayer routine. I found myself saying, “when I get better, I’ll have a talk with Jesus.” Forgetting that he has no problem coming to where we are, sitting beside our sick beds in life. That’s where he does his best work.

Awkward as it is to say, he places his hand on our tongue, like the man who could not speak, in the form of a thin wafer of his own Body we will shortly receive. As he was there then, he is here now. Only now we must not be silent and hold our tongue, but instead break forth into song, publish the news, and go forth and tell the world.

At the end of our lesson, they marvel and say “he has done all things well.” Then they inspired the famous hymn:

And leap, ye lame, for joy!