Remembering the Dead: Of Christ’s Death and Our Own | Wycliffe College
Skip to main content

Remembering the Dead: Of Christ’s Death and Our Own 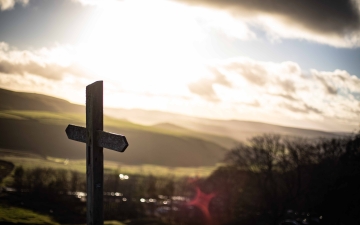 I enjoy visiting old graveyards. I like to wander around, reading the tombstones, taking note of the dates and places of birth, the biblical verses and sentimental poetry.

Last summer my wife and I were walking through an Episcopal churchyard in Cooperstown, New York, where we stumbled on a particular grave from the 1830s. The tombstone gave the woman’s name and her dates, and then the inscription: “She had her faults, but was good to the poor.” I would love to know the story there.

There is always a story

There is always a story, a life lived and rounded off by death, a stretch of time that says this person lived this particular life given them by the Creator. Any number of theologians, including Karl Barth and Hans Urs von Balthasar, have pointed out that without an ending one’s life would lack definition and clarity. Strangely enough, if my existence just kept going on and on indefinitely I would not be me.

These thoughts came to mind as I was reading the fine book by Ben Myers titled The Apostles’ Creed: A Guide to the Ancient Catechism (Lexham Press, 2018); we’ve been reading it as part of an adult study series in my congregation. Discussing the creed’s claim that Jesus “died,” Myers asserts that “for Christians the death of Christ is the turning point of human history." A friend of mine was puzzled about that claim. Why the death of Christ, she wondered? Isn’t there something overly negative, pessimistic, and basically gloomy in an obsessive focus on Christ’s death? Are we Good Friday Christians only, and not also Christmas, Easter, Ascension, and Pentecost Christians? Hadn’t Myers missed something?

My friend had a point.

Just as we should not separate the atoning work of Christ from his incarnate person, so we should not separate Jesus’ death from either the life that preceded it or from the resurrection that followed. In my systematic theology classes, I always try to steer my students toward a holistic understanding of Christ, one that tries to take seriously the full dimensions of his divine-human personhood. As Myers himself points out, the Apostles’ Creed seems rather in a rush to get from “born of the Virgin Mary” to “suffered under Pontius Pilate.” This is one reason the Creed should not be read in isolation from the gospel narratives and from the Scriptures as a whole.

Nevertheless, I do think there’s something fundamentally right in Myers’s assertion. As we read the New Testament, it is striking to note the extent to which all lines converge on the death of Christ. We see this narratively, as the crucifixion is foreshadowed from the very beginning of Jesus’ story—think of Herod’s slaughter of the innocents, or the “sword” that Simeon predicts will pierce Mary’s soul (Luke 2:35). We see it sacramentally, as Paul insists that baptism is baptism into Christ’s death, while the Lord’s Supper is the latter’s visible proclamation: “For as often as you eat this bread and drink the cup, you proclaim the Lord’s death, until he comes” (Rom. 6:3, 1 Cor. 11:26). We see it apocalyptically, when John the Seer is lifted up to heaven, where he beholds “a Lamb standing as though slaughtered” (Rev. 5:6). This pattern holds true across the Scriptures. It is no accident that throughout history the cross has been the most common and universally recognized symbol for the Christian faith.

If we now ask why this should be so, I’d suggest three reasons. First, Jesus’ death sums up the radical act of self-giving in which he poured himself out “for the life of the world.” He lives indeed, but he lives as the Crucified: thus the letter to the Hebrews pictures Jesus eternally pleading on our behalf before the Father. The once-for-all sacrifice on Calvary has become the eternal sacrifice; it is this perfect act of worship that is attested by all our liturgies and praises on earth.

Second, and quite simply, death is the human condition. “In the midst of life, we are in death,” declares the Order for the Burial of the Dead in the Book of Common Prayer. Or as Karl Barth memorably put it, with a refreshing lack of sentimentality: “Some day we shall be buried. Some day a company of people will process out to a churchyard and lower a coffin and everyone will go home; but one will not come back, and that will be me” (Dogmatics in Outline, p. 117). I seem to keep coming back to graveyards in this blog post. My point is not to be gloomy, but quite the contrary: for the gospel is that God comes to meet us in the midst of our mortality, our creaturely vulnerability, our sin. As I said to my students recently, the only qualification for hearing the gospel is that one be a dying sinner, a condition that, happily, applies to all of us.

Third—and here is a little bit of Easter preaching, smack in the middle of Lent—the New Testament proclaims Jesus’ death as itself the divine triumph over sin, death, the devil, and all that would separate us from God. This is especially the emphasis of the Fourth Gospel, in which Jesus’ death is seen as his “lifting up” from the earth, the first step in his exaltation and return to the Father. If from one angle the death is the decisive divine “No” to what humanity has made of itself, it is at the same time (and far more so) the divine “Yes” that restores us to communion with God and to one another.

Perhaps these themes can best be summed up by the Paschal troparion, a hymn of the Orthodox Christian tradition. In my Anglican parish, we always sing this hymn at the solemn Vigil Service on Easter eve:

Christ is risen from the dead,

trampling down death by death,

and to all those in the tombs

Or as we might put it, with just a slight twist on the Prayer Book: “in the midst of death we are in life.”

Joseph Mangina is Professor of Systematic Theology at Wycliffe College.

In this blog post, Dr. Judy Paulsen reflects on ministry at a deathbed, and why it's never too late to study theology.