On Returning to the New World 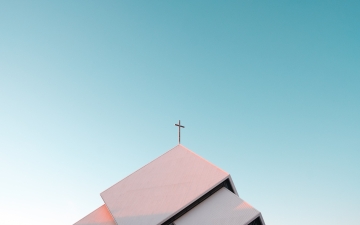 Europeans generally think of Americans as very religious. They see things like a public swearing-in with a hand on the Bible and read a lot into that—even as it is somewhat of a formality that may have no obvious religious significance for those taking an oath. “So help me God”—this is less a final declaration freighted with Christian significance than a necessary legal obligation.

To be sure churches dot the landscape in ways a foreign visitor will not fail to note. One can say this and yet equally remark that French villages display crucifixes at their entrances in a way that would be illegal in the US, and ancient Catholic parishes are equally replete and noteworthy for their omnipresence across France.

What is, of course, distinctive about the US—and to a certain degree, Canada—is the variety and number of different denominations. The Yellow Pages of old would display page after page of church listings, remarkable for their sheer differentiated number. Four or five kinds of Baptists, same for Presbyterians, Lutherans and Methodists, a United Church of Christ that is anything but that, Brethren, Adventists, Disciples of Christ, Latter-day Saints and Christian Scientists, and on it goes. The European Reformation/s birthed these entities. Hostilities, loss of employment, and wanderlust shipped them abroad to set up shop in the New World. The New World itself confected New North American offshoots.

In France, where we have lived for four years, there is nothing remotely similar. There is a struggling Église Reformé, evangeliste gatherings in small modern spaces, and that is about it. The church is for all intents and purposes Catholic. Their buildings are historically ancient and deeply entrenched. France is a Catholic country, if even in spite of itself.

In Germany, it is the Roman Catholics who are largely uprooted from their ancient physical embodiment in Cathedrals across the country. So too in England. But in neither place is there the same denominationalism such as one finds in the USA.

What the European—going back to de Tocqueville—is observing on the religious landscape of the New World is a physical presence in the form of denominated churches spread across the land. It is this pluriformity that says to them: America is a Christian country. Yet, of course, this is a judgment prone to exaggeration and misunderstanding, especially since the last decade of rapidly changing trends in American life.

An accident of history

What I wish to dwell on, however, is just this diversity and pluriformity, if even in diminished and diminishing form. What does it mean? Is it indeed a sign of vibrancy and health, such as is often claimed—from afar or from within? How should one, in fact, characterize the religiosity displayed in the form of variety of choice, when it comes to the denominated landscape of America?

One way to think of this is simply as a fact, an accident of history, which surely it is. No one designed this denominational variety or set about to construct it as a preferred good. It comes, literally, with the territory. It is a fact ingredient in what it means to be a New World, a land full of those who came from somewhere else and who brought with them the expressions of Christian faith and life that had existed across the variety of Old World countries, now plopped down in one United States.

Just here is the challenge for characterization. As time marches on, what the variety of expression must invariably entail is the sense of choice. This is true simply because one has thirty different church choices on one’s doorstep. It is also a religious fact that merges pretty quickly with perhaps the biggest American cultural reality, that of consumer choice. Just as there are fifty dog food choices at PetSmart, cable TV channels aplenty, and manifold different breakfast cereals to choose from, so too the fact of churches in differentiated number means they are there to be evaluated and chosen from. Mobility means the Old World parish idea is gone and thrown in for good measure is this astonishing church variety. First Methodist versus African Methodist, PCA or PCUSA, Missouri Synod Lutheran and North American Lutheran, and further abundant choices across even these named tribes and sachems.

The result of all this variety

The rich variety we observe in church choices used to mean that ecumenism was an obvious project. Enthusiasm for that at present no longer dovetails with the turn-of-the-twentieth-century idea of a “Christian Century.” Two World Wars flattened that kind of optimism. The Catholic Church did not fade away as an immigrant and anti-democratic entity with odd accents and foreign ideas and vesture. It is hard to believe one even thought that way, not very long ago.

When the New Testament, and Jesus Christ himself, speaks about the church as the Body of Christ, could it possibly coordinate that idea with this diffuse, differentiated, denominated variety? To be an Episcopalian is not to be something else. And so it goes across the denominated board. Surely this is not what the New Testament envisioned with the word “church”?

But we may be at a point where this rich diversity begins to mean something rather different. The historical anvil on which these differences were forged begins to recede from view. People forget who they are and where they came from. Certain groups—one could name the Reformed Episcopal Church as just one example among many—end up with an identity they did not start with, and indeed one they pushed hard against.

A reality that must be dealt with

These reflections need not point in any obvious direction. They are an effort to describe a fact about ecclesiology that must be dealt with in our present age in the New World. My sense of the Catholic Church in France was that, given the secular default of culture, and in the wake of having formally separated church and state in the early twentieth century, it occupied ground that was more centrifugal in character than centripetal. That was a trend going in the opposite direction in North America, given the reality I have sketched above.

But maybe the trend will reverse course, asking people to identify common ground wherein older historical differences simply lack the same urgency. This is not ecumenism-as-formal-project, but something more inchoate and unplanned.

Unless, of course, one trusts that the Great Planner, in whose hands time resides, is up to something greater than we can imagine. Which is of course always the case.

Perhaps the sharp edges that belonged to denominated identity will give way to a deeper grasp of common life in Christ. This is not love of diversity for its own sake; or an everyone-gets-a-prize optimism; or, we all worship the same God blandness. It is something that the march of time under God’s providence alone can craft.