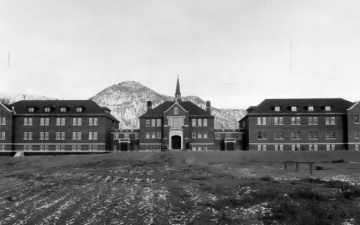 Names are important in the Bible. From the time Adam named the animals in the creation story, to the revelation of God’s name in the Sinai desert, to the angelic naming of the holy child who is our Saviour. Names identify. Names personify. Names are intimate. Names awaken memory. We are given names in our baptism, and we are told that the Good Shepherd “calls his own sheep by name” (John 10:3).

How tragic, then, to learn of the discovery of the unmarked graves of 215 children at a former Indian Residential School. The fact that this was a church-run school makes the discovery especially troubling, since the church has always taken great care in the burial of its dead. What are we to say in the face of evidence that human life has apparently been so carelessly discarded? And let us be clear. The evidence of such disregard goes beyond Kamloops. The Truth and Reconciliation Commission identified 3,200 children who died at residential schools, and the Commission’s findings about administrators’ dereliction in returning bodies or even informing families is shocking. But of these 3,200 (and the Commission believed that the real number is much higher), one-third of them are not even named.

How can this be? In some situations, records may have disappeared. On the premises of the former Shingwauk Indian Residential School in Sault Ste Marie, attempts were made to mark the burial place of nearly 100 students. But owing to neglect of property managers, markers deteriorated and some were vandalised. In the early 1980s, it was the residential school survivors who took the initiative to redress this neglect by erecting a memorial cairn and establishing a perpetual care fund. This might be one response to discoveries like those being made near Kamloops. But it shouldn’t be the sole burden of the survivors.

The more sinister truth is that the irresponsible actions of residential school administrators reflected the widespread view of the colonisers that non-European peoples were descended from an inferior race. Indigenous people were regularly described as “children” and the assimilationist (some would say “genocidal”) policies of the government are now well known. A prominent historian and civil servant of the mid-19th century spoke of assimilation as “the only possible Euthanasia of savage communities.”

While no one today would be so repugnantly forthright, it is not unusual to hear people issue caveats about the residential schools. But even in the best cases, there was a racism built into the very concept of “education” that was caustic to the human soul. In one sense, the residential school project was a response to the conditions produced by racist government policies. But it was more of a handmaid of these policies in that it perpetuated the racial stereotype of white superiority. The effect on children, in the haunting words of the late Richard Wagamese, was “to scrape the Indian off of their insides” so that they returned to the bush and river “raw, sore, and aching,” the invisible and unspoken pain “seeping into their spirit.”

One of the most heartbreaking aspects of the discovery in British Columbia is the realization that these children were not dignified by the preservation of their names. They were more than casualties of a malign social experiment, they were at one time members of families, each one a beloved child, and child of God. And they had names. As painful as it may be now to hear them, hear them we must. We must spare no effort in helping to discover these precious relics in the wreckage we have created. And when we pray, “those whom we have forgotten, do thou, O Lord, remember,” let us do so shamefully and in the hope that God has recorded for them a new name, shared only by the departed and God alone (Revelation 2.17).