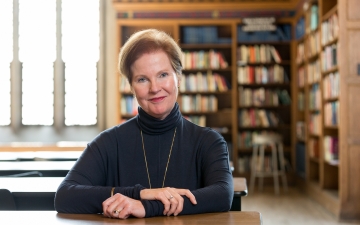 Why is it that Christians—particularly evangelical Christians—are increasingly seen as the enemy of the common good?  A Google search for “evangelical” in The New York Times quickly locates numerous articles about the evils of Christian evangelicals. Evangelical Christians are blamed for discounting climate change, for distrusting science, for supporting systemic racism, for equating unfair capitalist structures with Christian principles, and so on. Reading mainstream media is often a chastening and upsetting experience for those of us who have found wondrous truths and nurture in evangelical Christianity.

I expect that those reading this know and experience a very different way of being evangelical Christians in the world—a way that cares about God’s creation, that knows that God works through scientists and doctors, that sees each person as a child of God and seeks justice for all.

Yet, this way of being an evangelical Christian is increasingly invisible to a growing number of people. I think the reason goes deeper than the misguided views of a troubling proportion of white evangelicals, and also deeper than the failure of those of us who think differently on these issues to make a media impact.

The means are never justified

The anger at the root of society’s disdain for us has to do not only with these problematic opinions but with the means some are willing to use to promote them—means that include belittling, misrepresenting and even speaking hatefully.

The wider public’s anger at Christians is a fitting judgment on us. It understands perhaps better than we do that we are supposed to be the ones who care for the world and do so in the manner in which God does—caring not for our own interests but for those of others. The means we use are always to be those of love.

I fear that the root cause of this self-interested way of thinking about our place in the world is a particular hearing of the good news. In this hearing, the gospel is understood to mean that God is on our side, and we are on God’s side—and the rest of the world remains God’s enemy and ours. That being the case, any means we use to defeat the enemy is fine.

For the sake of the world God loves

But I think Jesus and Paul would disagree with that. I hear Jesus asking his disciples to be the ones who suffer for the sake of the world God loves. We are to take up our crosses as Jesus took up his—out of love for all God created, human and non-human.

I hear Paul saying that creation waits eagerly for the revealing of the children of God. With the help of the Spirit, God’s children groan along with creation for the redemption of our bodies. This is not a self-focused groaning but a groaning along with and for creation. It is a Spirit inspired understanding that when our bodies are transformed, the rest of creation will also be. When the children of God are gloriously free, so will be creation (Romans 8:19-23). Those in union with Christ are inspired by the Spirit to care for all of creation—human and non-human.

In other words, the gift of salvation is not for our sakes only. Salvation liberates us to see that it is not just about us. Salvation frees us to be God’s children whose way of life is care for everything and everyone that God has created, and least of all for ourselves.