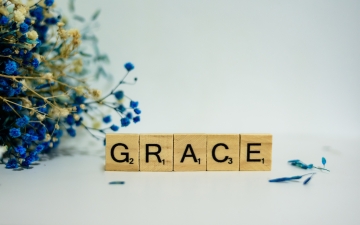 A month ago Frederick Buechner died at age ninety-six. During that windfall of years, in which he served as a high-school chaplain, was ordained a Presbyterian minister, raised a family, and worked his unusually enchanted way with words, Buechner wrote a book that I read again each year. It came to me as a gift from a dear friend. It’s called The Alphabet of Grace.

Imagine Augustine’s Confessions—that roving, prayerful hunt through Augustine’s memories in which the new bishop looks for signs of God’s grace across his life—except bounded by a single day. That’s The Alphabet of Grace. In the book Buechner rifles through the “the litter” of one ordinary day in his life, seeking the divine sense that lurks in the debris of his “sleeping and waking and eating and saying goodbye and going away and coming back again.”

The point is that God’s grace is written in the commonplace, a conviction that animates Buechner’s novels, sermons, essays, and memoirs. But just because grace hides in plain sight, it doesn’t follow that it’s easy to see. Making out God’s meaning requires squinting at the text of our lives, like a student labouring with the Hebrew alphabet. “Thy word is all,” wrote George Herbert, “if we could spell.”

This summer, just before the news of Buechner’s death, I stumbled onto the wisdom of The Alphabet of Grace in a new way. I was reading the book of Genesis.

Maybe that strikes you as an unlikely place. Genesis, after all, is concerned with God’s work on the grandest scale. The book narrates the cosmos bursting into life, the heaven-touched origins of the human creature, the tragedy of paradise lost, the great struggle between the Seed of the Snake and the Seed of the Woman, the City of God versus the City of Man, and the drama of the missio dei as it chases down a runaway world.

But Genesis says something else, something about God’s grace in the debris of ordinary life. And it’s too easily missed because it comes to us, fittingly, in what strikes most of us as most boring: the genealogies. Those lists of “begats” that tie together the more memorable stories of Genesis speak grace.

God’s first words to humankind are, “Be fruitful and multiply” (Gen 1:26). When Eve and Adam leave Eden’s Garden, something is well and truly lost. The pair leave behind intimate walks with God and the fruit of the tree of life. And they enter the land of death. But they don’t leave God or his gift of life behind. The dew of God’s blessing clings to them, like the clothing God stitches for them before sending them into whatever comes next (3:21).

What comes next is, well, life. Life outside of the Garden turns out to consist of life, even abundantly. In the cursed soil east of Eden, family trees grow wild. The simple gift of life springs up from Cain—the murderer whom God protects, for life’s sake—and from Seth alike (4:17–5:32). Noah and his kids fail, and yet God multiplies the world’s seventy nations from them (9:20–10:32). Ishmael, conceived outside the promised seed, is cast off to die; God is pleased to bless him by making him a nation in his own right (22:18). Isaak has no blessing to offer Esau after Jacob steals it, and yet when the two brothers meet again, it turns out that heaven’s irrepressible blessing sprung up for Esau too (33:9). God’s gift of ordinary life simply does stay within the tight channel of God’s own election. Everywhere you turn in Genesis, grace is scrawled in the lives of the righteous and the unrighteous, the chosen and the unchosen, the main characters and the extras, the lives that go off the rails, as well as the lives whose story merited only a bare genealogical mention but nothing else. Each bud on the family tree of humankind is lovingly recorded in God’s book (Ps 139:16). Which means, according to Genesis, that each human life spells some synonym of “grace,” because its common etymology—its root—lies in God’s blessing. There lives the dearest freshness deep down, as one poet put it.

“At its heart, most theology, like most fiction, is essentially autobiography,” writes Buechner at the beginning of The Alphabet of Grace. There’s truth in that, and Buechner knew it well. But Buechner and Genesis are also saying that autobiography is theology. In fact, they’re telling us more than that: Life—the very fact of it—is theo-logy, that is, it is God’s speech. And it is a gracious word. Bare, ordinary life spells out the Word that blesses, whether or not we try to read it, or even can.

Nate Wall is a PhD student at Wycliffe College. Nate has taught biblical languages at Wycliffe, and is currently finishing his dissertation on the exegetical habits of John Donne, the 17th century Anglican poet and preacher.