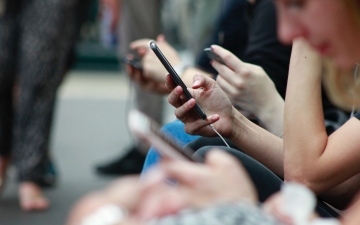 We’ve all had enough, it seems. And yet we only want more. Shoulders curled forward, phones in our hands, eyes fixed to the screen, our brains wired to thumb endlessly deeper into the digital matrix: this is becoming the posture of humanity. In January 2020, in the early days of COVID-19, 3.6 billion people on earth were using social media. Amidst the lockdowns of the pandemic, that number surged to more than half of the people on earth.

That surge in social media users has arrived despite accumulating distrust of the social reengineering and political distortions unleashed by Silicon Valley code writers. The US Congress, EU, and parliaments around the world are summoning the CEOs of Apple, Google, Facebook, and Amazon to antitrust hearings, even as legislators grapple with the strange language of algorithms, monetized gazes, and dopamine hits.

Jeff Orlowski’s new Netflix documentary, The Social Dilemma, emphasizes what we already know: that social media has light and dark dimensions. While it can keep you in touch with Grandma, propagate cat videos and keep church members linked during lockdown, it can also be addictive, creepy, rage-making and immensely polarizing. But the film’s interviews with social media architects and engineers who have defected from the industry go behind the curtain, and sound the alarm.

The subtle precision by which supercomputer AI shapes every click, scroll, notification, and ad into my personalized bubble universe of constant engagement and dopamine gratification, is a supremely profitable business model with manipulative global impacts. It can change election results, and spark fake news riots. The film explores Facebook’s role in the Rohingya genocide, and social media’s links to Gen Z’s alarming rises in mental health issues and suicides, especially among girls.

The largest ever global survey on online violence shows that one in five girls (19%) have left or significantly reduced use of a social media platform after being harassed, while another one in ten (12%) have changed the way they express themselves. Attacks seem most common on Facebook, where 39% of girls surveyed have suffered harassment, but occur on every platform including Instagram (23%), WhatsApp (14%), Snapchat (10%), Twitter (9%) and TikTok (6%).

The importance of questioning

It’s genuinely important that faith leaders and community practitioners are bringing their own questions about social media’s growing, darker forces. My eyes (roaming the digital headlines, of course) were caught by this a few days ago: “You Cannot Serve Both God and Twitter: Social Media and Spiritual Formation.” Follow the link and Richard Beck insists that,

“When it comes to moral and spiritual formation, churches are fighting a losing battle with social media. We just can't compete. Job #1 for church leaders is getting their people to unplug. Because if your people are plugged in they will never, ever listen to you. Social media is drowning you out.”

In his post Beck gives voice to Andrew Sullivan’s fears that our American cousins verge on the brink of dystopia in their current political and pandemic roiling.

As someone who studies closely the ways and means of community development, it appears to me that the church and social media in Canada are verging on a similar collision. The screen gives, and the screen takes away. In a post-pandemic world, will we be able to rebuild anything like the singularly rich, local, thick, muscular social capital that our grandparents fostered in their churches and communities? Will we be able to stem the surge of lockdown screen time? Do we need a 12-Step program for AI Anonymous?

The Social Dilemma is worth a watch, a remarkably effective wake-up call to community leaders, and culture-builders, and people of faith. It’s worth the wrestling match, if we are to steer past the dystopia and re-find the path to community-based spiritual formation.

Let’s talk. You can follow me on social media. Just kidding.

Peace and wisdom to us all. David