Struggling to make sense of the senseless 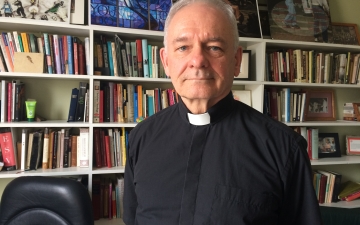 In the wake of the mass killing in Toronto yesterday, journalists are - like all of us - struggling to make sense of the senseless. Most Canadians reacted to the news of yesterday’s tragic events with shock, disbelief, horror. A sinking sense of "not again, not here." At some level, this has to be because we deeply value human life, and we recognize the injustice when innocent life is snatched away. Murray Henderson ("MH" below) has been working at Wycliffe College this semester as Interim Chaplain. He reflects on our reactions to the tragedy.

Q:  What do you make of the range of responses and the questions that are surfacing now in reaction to the horror of yesterday's events?

MH:  "Horror" is exactly the right word. There is the violence which is frightening, but it’s more than that. There’s this sense that these folk were going about their daily life, shopping, going back to work from lunch, taking kids to school and suddenly, their lives are, as you put it, "snatched away.”  Some of it’s likely the sense that, "It could have been me," but I think it goes deeper than that. It is indeed that most of us have the sense that human life, the life of the individual person, is precious, I would say, sacred.

Q: The police officer who subdued the suspect - Constable Ken Lam - is being widely hailed for not firing his gun, but for handling the incident with obvious courage and compassion. We can assume that officer had been well trained. But is it also fair to think that in the core of who he is as a person, he deeply values human life, otherwise he might not have responded the way that he did?

MH:  Yes, I agree it’s pretty mind-boggling! The officer has every reason to know his own life is in danger, yet he exercises enormous restraint. If training played a role, then three cheers for that training. Yet it goes beyond that. Deep in the officer’s heart there is something that wants to preserve the suspect’s life. Many would say, “He deserves to die.” The officer refuses to make that judgement. Even if the man is proven guilty his life is too precious to blow away. That’s what’s so remarkable!

Q:  Can you trace for us the Christian value placed on human life that lies at the root of Western culture?

MH:  My take on this is that Western civilization gets this deep respect for human life, this awe in the face of life from the Christian faith. When Jesus says that God “sees the little sparrow fall” he’s saying that the individual ought not to be sacrificed for the group. If even a wicked person is a creature of God, and can have a relationship with God, then his or her life is intrinsically valuable. The idea that the death of Jesus was for others, all others, drives this point home. No doubt we in the West haven’t always lived up to this truth, but it’s there deeply embedded in our hearts. Human life is precious just because we are creatures and children of God, from conception to our dying day and beyond!

Q:  In your long career as a pastor, you have no doubt often been called on to express comfort for those who mourn. What in your own faith experience enables you to do that?

MH:  There are no easy or glib answers for the loved ones of those who lost their lives or who were seriously injured. All I could share is that God is a God who loves your loved one, and who loves you. God has had the experience of seeing his own Son brutally killed. God is a God who wants justice. The confident Christian hope is that in the end, God will see that justice is established in the universe: “God will wipe every tear from their eyes” (Book of Revelation 7:17).  If there is no such God, then the injustice of human history can never be dealt with.

Q:  Any final thoughts on this that you’d want to share, Murray?

MH:  What an example this officer gives us. Talk about non-violence!  We need to broadcast his example in the face of the death-dealing forces that threaten all that’s best in human life.

Murray Henderson has served as a priest of the Anglican Church of Canada for 48 years. He’s currently serving as Interim Chaplain at Wycliffe Theological College, and is an honorary Assistant priest at the Church of St. Mary and St. Martha in the Weston area.