On Truth, Public Discourse, and Being Bothered | Wycliffe College
Skip to main content

On Truth, Public Discourse, and Being Bothered 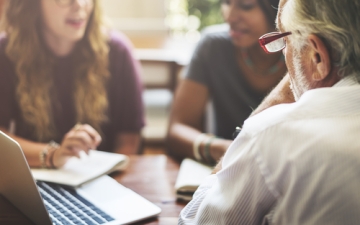 "Is God a figment of the imagination?" It's a question worth pondering, and one that Wycliffe College invites you to think about at a unique event this fall. Why would a Christian seminary host such a dialogue?  That is also a question worthy of reflection, one that prompted the blog post below.

Ray Bradbury in his dystopian classic, Fahrenheit 451, follows the story of Guy Montag, a fireman whose duty it is to find books, which are illegal, in order to burn them. One of the pivotal scenes in the book has Montag reflecting with his wife Mildred; he deliberates, “We need not be let alone. We need to be really bothered once in a while. How long is it since you were really bothered? About something important, about something real?” The reason I love this book, and this quote in particular, is that I think that in our diverse society we have an important choice to make, that is, whether or not we truly are willing to be bothered.

Christianity has both a brilliant and sordid intellectual history

It has inspired some of the greatest thinkers, scientists, and leaders in history, helping shape societies for the good of its citizens, and influencing many important works of literature and theory in the western world. While at times it has been a force for ill, breeding censorship, reinforcing systemic discrimination and racism, and more recently, feeding into a culture of anti-intellectualism. Even if these are not labels we are comfortable attaching to the Christian tradition, or to our own particular brand of it, they represent sentiments held by the broader public. One does not have to spend much time within evangelical circles to hear the rhetoric of the ongoing culture wars or hear of the relentless attack on Christianity at the universities of our nation, or of the bias in the secular media.

For some, the solution is simple – a retreat from public life, a privatization of Christian faith and development of a strong Christian sub-culture as in Rod Dreher’s Benedict Option. The question is whether or not we should give in to this pessimistic narrative of retreat, agreeing with Alasdair McIntyre that “full participation” in the general society is no longer possible for those who adhere to a traditional Christian faith. I wish this narrative of retreat was new, but unfortunately, it is one that has reoccurred over various epochs in Christian history. I think of the mass exodus of evangelicals leaving institutions of higher learning in the early 20th century, ironically often from educational institutions which themselves were founded in the Christian tradition.

This brings me to the point of explaining why we do the events we do.

Wycliffe College is one of the few evangelical institutions that stayed within the framework of the university. So here we are! In hosting events with top Christian and non-Christian thinkers, we are opening up a space in which to be bothered, as we all should be from time to time. I believe it is vital for Christians to uphold epistemic humility as a virtue. I think of Oscar Wilde in The Soul of Man under Socialism, and although I am brutalizing the context, he says, “it is much more easy to have sympathy with suffering than it is to have sympathy with thought.”

It is hard for us to allow ourselves to be vulnerable on an intellectual level, it is much easier to allow our emotions to be moved. It is much easier for those within the Christian tradition to cooperate with those outside of it on areas of humanitarian and social concern than on wrestling with truth. Some fear that Christianity could not – or needs not to – withstand a critical assessment of its veracity. I counter that we should do this: offer up the Christian faith to public scrutiny because we have confidence that all truth is God’s, and if it isn’t true, it isn’t worth believing.

Such protectionism is not a fault solely of the Christian tradition; those outside the tradition are equally guilty of erecting intellectual silos and ferociously defending their own worldviews. It is a human tendency, to keep our paradigms intact, even in view of significant anomalies.

Public events such as this are an opportunity to break down these barriers, to discourse with people who do not agree or see things in quite the same light. They are an invitation for those both within, and outside of the Christian tradition to be bothered together as we seek the same aim, to know truth and to flourish as people.

Steve Hewko is the Program Director at Wycliffe College. Steve’s role is to develop programs and events that facilitate the engagement of the college with the university, the church, and the general public.  Steve has a B.Sc. in Biochemistry from the University of Alberta, a Master of Theological Studies from Wycliffe College/UofT, and is currently completing a doctorate in Comparative Islamic and Christian Theology.