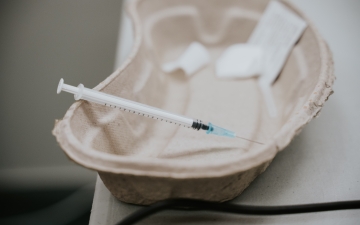 This blog post is the first in a series, in which Wycliffe theology professors consider the COVID vaccination debate. In the following, Ephraim Radner, Professor of Historical Theology asks, “How did the issue of vaccination so divide the church?”

I am a conservative and traditionalist Christian. Yet during this Time of the Virus I seem to have ended up on opposite sides with many of those with whom I would otherwise agree in the faith. The matter is vaccination: I am vaccinated (and I wear a mask with most others!), I think most people would be well served by being vaccinated, and I support vaccination mandates for those who work or frequent places of public interaction, including schools, as a way of serving others well. How did the issue of vaccination so divide the church?

In trying to understand this, I can only speculate. I am not sure that significant theological differences are at play; and the matter of individual “rights” in this case is not particularly theological. But I do think that there are religious reasons informing all this, at the base of which lies the question of trust: many traditional Christians no longer trust the civil government’s claim to value, let alone protect the interests of Christian faith; and many outside their circles view traditional Christianity as a redoubt of anti-social fanaticism. The vaccination debate was kindled and has flourished in the fields of this mutual mistrust, and in its flames a host of otherwise reasonable moral judgments have been reduced to ashes.

I am quite convinced that traditional Christians have every reason to mistrust the civil state’s attitudes towards them. Over the past 15 years especially, there has been a rapid repudiation of venerable Christian commitments in the public sphere, on well-known topics from family and sexuality, to the value of human life. It is not the debate itself that has been the main issue, but the quite rapid encroachment, fueled by judicial judgements, on religious conscience around these matters, from enforced school curricula to the curtailing of speech and finally practice itself. The astonishing imposition of medically-assisted suicide, with its judicially inescapable demands even on doctors, is the epitome of this encroachment, and it strikes at the heart of Christian convictions regarding the nature of God and the human creature.

The unfolding of the civil authorities’ response to the pandemic did little to alleviate this mistrust. Churches were ordered closed, and even after some sense of the disease’s transmission patterns began to be established, congregational life was treated in the same category as bars and restaurants, while pastoral life was relegated, by statute, to a privatized sphere that has long been viewed as a the only proper place for religion by its enemies. The sick and the dying, as a result, were left to their suffering in unthinkable isolation. The notion that there were “essential services,” like grocery stores and public transport, in which people were allowed (and still are) to wander about in close (sometimes literally packed) quarters, but that congregational prayer and worship were thus inessential, and deemed to be places of danger, even under reasonable distancing protocols, has righty seemed not only clueless regarding the nature of religious identity, but hypocritical. The evidence regarding the limited goods of masking has never been seriously discussed in the public, and while it is compelling enough as a basis for public policy, it is also weak enough to permit far more rational approaches to be pursued responsibly. (Masking lack of evidence with politics - The Centre for Evidence-Based Medicine (cebm.net); Surgical masks reduce COVID-19 spread, large-scale study shows | News Center | Stanford Medicine). But such discussion and responsible decision-making around a host of pandemic-related issues has been actively suppressed, as David Cayley and others have persuasively, and even chillingly, argued (The Case Against Vaccine Passports | David Cayley | First Things).

Vaccination entered this genealogy of mistrust. But it did not engender it. The distinction here is important. Like it or not, the question of vaccination’s efficacy as public policy, let alone personal responsibility, needs to be judged on its own terms, not in the shadow of another history. For Christians to refuse to make such judgments is to stir up a not unreasonable mistrust towards them from their critics. While the evidence for the benefits of masking points to its limitations (but also its nonetheless compelling usefulness), for instance, it has not helped that that, in some well-publicized cases, churches have defied even reasonable precautions, to stage “unprotected” gatherings that rival rave concerts. These kinds of actions only further civil mistrust of the irrationality of traditionalist Christians. And with the refusal of some Christians to get vaccinated and to sweepingly oppose mandates, the charge of anti-social irrationality strikes many as well-founded.

There are several elements that ought to come into play in making judgments about vaccination, and they are all fairly straightforward ones, based on the plausibility of available evidence. Everyone, of course, has to make these determinations about plausible evidence themselves, but the data is not hard to find:  vaccination dramatically reduces the risk of infection, and thus of transmission, i.e. infecting others. (See a recent Australian study at: Living Evidence - COVID-19 vaccines | Agency for Clinical Innovation (nsw.gov.au).) Add to that the reality that the COVID-19 virus is potentially deadly, and far more deadly than other common transmissible diseases like the flu; that, even in its non-fatal form, it can make people horribly ill;  and that in the process, it does and has placed enormous burdens on the health care system and medical care-givers; and so on and so on; and finally that widespread vaccination, where it has been achieved, while not eliminating these risks, has markedly reduced them—given all this, and the widely established evidence for it, it seems very unreasonable not to consider vaccination a public health priority.

But what about mistrust of the whole civilly-ordered medical system this involves? It is true that there are legitimate questions to be asked about long-term effects of the vaccines, based as some of them are on novel technologies; it is true that many of these questions have been deliberately as well as unconsciously marginalized and ignored within both the medical and more popular communities. For all that, however, these questions do not, in themselves, seem to have sufficient data backing them up to constrain the demand for immediate public action. The actual medical, and thus human, crisis posed by the virus is horribly real, and we can no longer chalk it up to media exaggeration or faithlessness. Every one of us, including me, knows someone (perhaps several people)—alas, often someone dear to us, as the Wycliffe community knows—who has either died or been incapacitated by the illness. And though the questions that exist about vaccines deserve to be pursued openly, the overwhelming evidence—it seems to me and to the vast majority of Canadians, whether highly educated or not and whether Christian or not—appears to ground the need for most people to be vaccinated.

There is nothing theological about making these determinations. They are based solely on plausible—granted, never certain—evidence. But here, plausibility seems to me compelling, and it is my responsibility to make this judgment so that I can serve the common good, which is certainly a Christian duty. When it comes to mandates, it has not helped that our civil governments have long been “mandating” matters that seem contradictory, in the eyes of many Christians, to the Gospel. Nor has it helped that the treatment of churches during this pandemic has been at best tone-deaf, at worst irrationally and often immorally inimical to Christian identity. But faithful Christians need to discriminate, in their own reasoning, between when mistrust is prudent—to be “wise as serpents”—or when it is holding us captive to fears that drive us to the very anti-social behavior our critics accuse us of, in which case, it is time to be “innocent as doves.”

One of the most persuasive presentations of how Christians are called to exist in relation to their larger society is the ancient Letter to Diognetus (Diognetus. The Epistle of Mathetes to Diognetus (translation Roberts-Donaldson). (earlychristianwritings.com). It is worth reading carefully: we are to be the “soul” of our larger societies, giving them life, animating them with our service, loving them in the face of whatever misunderstanding and hatred comes our way. This calls for steady judgments, and steady hearts.

Whatever the history of our social experience may be, I believe that The Time of the Virus, for Christians, ought to be governed by clarity of judgment within our common life. It ought not to be a Time of Mistrust on anybody’s part.

Read part 2 in this series, a reflection by Joseph Mangina, Professor of Systematic Theology here.

Ephraim Radner is Professor of Historical of Theology at Wycliffe College.